The boutique was designed by Peter Marino. 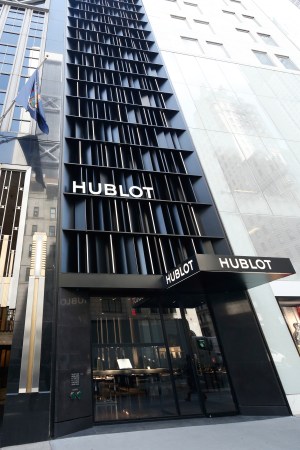 NEW YORK — Two are better than one.

That’s the opinion of Hublot, which opened a 1,500-square-foot store at 743 Fifth Avenue on Tuesday afternoon, not far from its 62nd Street and Madison Avenue unit. But Ricardo Guadalupe, chief executive officer, believes the stores attract two different customers.

“Madison is more of a destination for people who know the brand — and for locals,” he said. “But here, it is 95 percent tourists. Hopefully when they come in, we can transform that into sales.”

The store, which is Hublot’s largest in the U.S., was designed by Peter Marino, who also designed the building. The black facade is intended to mimic one of the brand’s watch bands, Marino said. The powder-coated black aluminum panels rise 70 feet and are lit with LED lights.

Inside, the design is contemporary with black lava stone and wood floors, graphite-colored leather furniture, gray suede walls, glass and polished stainless steel fixtures, “shadow-less” LCD vitrine windows, a wall of monitors, and a “book” with virtual turning “pages,” each showing a part of Hublot’s history, in the main Fifth Avenue window.

Marino, who has been working with the brand since 2010 when he created the design for the Place Vendôme location in Paris, said, “The brand is moving fast and the design is about speed.” In the past, he said there was “a lot of Formica, but that didn’t show the high nature of the brand. It’s a luxury product” and this new design is “based on sporty concepts,” which is integral to the brand.

The store also showcases an untitled 2014 painting by Albrecht Schnider at the back of the boutique that Marino said is “an abstract version of a back of the watch.”

He said since the store had its soft opening earlier this month, 80 people a day are visiting and sales are above expectations.

Guadalupe said the store design will be used at new and revamped units around the world. Hublot operates 80 stand-alone stores worldwide and 12 in the U.S. He said a second location in Tokyo is tops on his wish list for the next store and the company is actively searching for a location on the Ginza. “But it is not easy to find,” he said. A ski resort location in Aspen, Colo., is also of interest.

The opening of the Fifth Avenue store brought brand ambassadors Usain Bolt and soccer legend Pelé to the ribbon cutting, which was prefaced by acrobat dancers floating down the facade of the adjacent Louis Vuitton store. The dancers, who descended from the roof, presented Bolt with his newest limited-edition watch, the Big Bang UNICO Usain Bolt. The yellow gold watch is accented with green and embossed on the strap with a Jamaican flag in a nod to Bolt’s home country.

At the event, Bolt was in a made-to-measure black Gucci pinstripe suit instead of his more-familiar running togs. But that didn’t stop him from posing in his signature lightning bolt move. He said that when he’s not making public appearances, he’s a “simple” dresser, opting for “jeans, Puma shoes and white T-shirts.”

In Rio de Janeiro this summer, he said he’ll run the 100- and 200-meter races “and try to defend my title,” he said. “The Olympics are always very competitive and are the biggest event for any athlete, so I know it’ll be tough.” In terms of competition, he’s most concerned about American Justin Gatlin, who he said “has really been pushing me over the last two seasons,” as well as fellow countryman Yohan Blake.

Regardless of the outcome in Rio, Bolt plans to retire in 2017 after the World Championships in London. After he hangs up his spikes, Bolt said he “wants to stay in sports” and hopes to work internationally “encouraging athletes and building sports facilities in different countries.”

Bolt was joined by Pelé, who is eager to see his native Brazil host the next Olympic Games. But he didn’t venture a guess on which team might take home the most medals, saying the Olympics “is a box of surprises. You never know what’s going to happen.”

He also admitted to having some mixed feelings about the Games. When he played, Brazil never won a gold medal because he was a professional and not permitted to participate. But today, professionals can play, he said, so maybe Brazil will give him his first shot. “This is my opportunity to play in one Olympics,” he said with a smile. “Unfortunately, that’s only in my mind.”