Hudson Yards planners expect the "Vessel" to be a major New York destination. 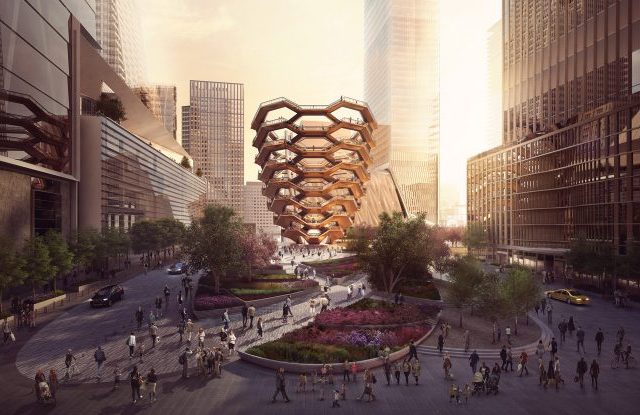 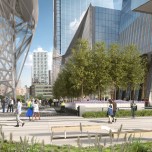 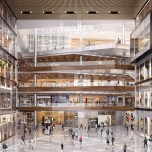 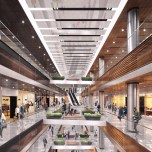 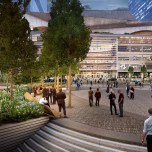 After months under a shroud of secrecy, Hudson Yards on Wednesday unveiled the renderings for its centerpiece landmark, called “Vessel,” and the surrounding public square and gardens.

Like the 25-acre Hudson Yards mixed-used development itself, “Vessel,” created by British designer Thomas Heatherwick, is massive. It’s a 16-story, geometric lattice of 154 intersecting staircases, almost 2,500 steps, and 80 landings that will rise from a base 50 feet in diameter and grow to 150 feet wide at the top. It’s being constructed in Italy out of steel and clad in polished copper and is expected to be up and open to the public in two years.

This story first appeared in the September 15, 2016 issue of WWD. Subscribe Today.

“Like the Eiffel Tower, this will be iconic. But it will be more participatory. You can walk around the whole thing,” Stephen Ross, chairman of Related Cos., co-developer of Hudson Yards along with Oxford Property Group, said. “It’s over a mile long in steps, and there’s an elevator for everyone to participate. Nobody who comes to New York won’t want to experience it.”

With pomp and circumstance that included a performance by the Alvin Ailey dancers, the unveiling was presided by Ross; Mayor Bill DeBlasio; Heatherwick, and Thomas Woltz, the landscape architect creating the public space and gardens which will be anchored by the Vessel. The event was held outdoors right by the construction site on 34th Street between 10th and 11th Avenues.

“It’s an amazing thing to be making a square as big as Trafalgar Square with a landmark in the space,” said Heatherwick. “We knew we had to do justice to all the amazing buildings and spaces” at Hudson Yards, said Heatherwick. “New York has revolutionized our thinking about public space.”

He said “Vessel” would be a “feeding gallery” drawing crowds coming off the High Line and different sites in Hudson Yards, such as the future Culture Shed and shopping mall, as well as the office buildings.

Anderson Cooper, who conducted an interview with Ross, Heatherwick and Woltz, said, “Hudson Yards is really about creating a great new neighborhood in New York City.…creating a new center of gravity.…I can’t wait to run up the ‘Vessel’ before I go to work.”

“Hudson Yards is reenergizing a section of the city not long ago disconnected from the vast majority of us,” DeBlasio told the crowd. He praised Ross for his “audacious vision” and steadfastness in making Hudson Yards happen and making it “inclusive.” Hudson Yards, the mayor added, “will be one of the great public squares of the city. I like it. I am impressed by it. It has a meditative quality. It will be a place for people to be active and cause us to reflect and think. Everyone will be talking about it” and undoubtedly subject to a range of opinions.

Also at the event were Police Commissioner William Bratton, who retires from his job in two days; Jim Gold, president and chief merchandising officer of the Neiman Marcus Group; Diane Von Furstenberg; David Rockwell, and former deputy mayor Dan Doctoroff, who was instrumental in getting Hudson Yards going.

The public square and gardens at Hudson Yards, designed by Nelson Byrd Woltz Landscape Architects, in collaboration with Heatherwick Studio, will have more than five acres of public plazas, groves, woodlands plants, perennial gardens and a 200-foot-long fountain mirroring the flow of a river. According to Woltz, “When complete, this continuous chain of open spaces on the West Side will run from Gansevoort Street to Times Square, making it the largest network of public spaces developed in Manhattan since Central Park.”

“In a city full of eye-catching structures, our first thought was that it shouldn’t just be something to look at. Instead we wanted to make something that everybody could use, touch, relate to,” said Heatherwick, who added that “Vessel” will offer many permutations for navigating it up and down and across, not to mention providing cover from the rain.

Heatherwick said he was influenced by images he had seen of Indian step wells, made from hundreds of flights of stairs going down into the ground. He also said that when he was a student, “I fell in love with an old discarded flight of wooden stairs outside a local building site. It caught my imagination and I loved that is was part furniture and part infrastructure. You could climb up stairs, jump on them, dance on them, get tired on them and then plonk yourself down on them. Years later, suddenly here was an opportunity to make a new kind of landmark for Hudson Yards.”

Hudson Yards extends from 30th to 34th Streets between Tenth Avenue and the West Side Highway. It’s considered the largest private real estate development in the U.S. and the largest development in New York since Rockefeller Center in 1939. When completed in 2025, Hudson Yards will include more than 17 million square feet of commercial and residential space, with state-of-the-art office towers, more than 100 shops, a collection of restaurants, 4,000 residences, a public school, an Equinox hotel and 14 acres of public open space.