The total renovation tab, according to sources, could be as high as $70 million to $75 million figuring in vendor contributions. 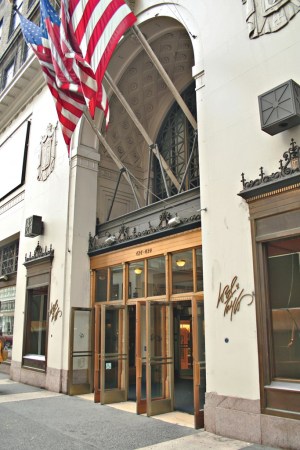 Renovations at Lord & Taylor’s Fifth Avenue flagship are back on and in a big way.

The company will invest $40 million over a 12- to 18-month period beginning in January to renovate floors two to nine, Richard Baker, the chief executive officer of Hudson’s Bay Co., told WWD Tuesday as the Canadian retail group reported a $2 million net loss for the third quarter. The total renovation tab, according to sources, could be as high as $70 million to $75 million figuring in vendor contributions.

Baker, providing WWD with a taste of capital improvements to come at Lord & Taylor and The Bay divisions of HBC, said the flagship’s second level will be converted almost entirely to shoes; designer and contemporary floors will be upgraded, and 80,000 square feet of office space will be reconfigured into selling space. The 625,000-square-foot flagship, with each level having 45,000 square feet, previously renovated its main and 10th floors at a cost of $25 million.

“We expect there to be a large number of Topshops” across Canada, Baker said. He’s seeking other brands to partner with as well, though Baker would not provide any names.

Baker, a real estate investor-turned-retailer, put the spotlight on how the company will maximize its extensive retail property holdings. He even mentioned the possibility of creating a real estate investment trust out of his company’s assets in Canada, mirroring a strategy recently undertaken by Loblaw’s, Canada’s biggest grocery chain, though he was clear that there are no plans currently being hatched.

HBC owns or ground leases 11 million square feet of retail real estate, including seven huge Bay flagships between 300,000 and 700,000 square feet. All the flagships, including Lord & Taylor on Fifth Avenue in New York, are owned. Baker previously said he’s pumping in more than $1 billion in renovations over the next five years, touching all 91 of The Bay’s units and all 48 Lord & Taylor units to varying degrees, though the company has been spending on renovations for the last two years, including $186 million last year.

Earlier in the day, HBC disclosed its quarterly results for the first time since it went public last month, reporting a net loss of $2 million for the third quarter ended Oct. 27, compared to a net profit of $1.26 billion in the year ago quarter. The swing in the net primarily reflects HBC’s sale of Zellers leases to Target Corp. last year for $1.84 billion and $60 million in expenses from the deal. On a continuing basis, net earnings in the quarter came to $800,000 compared to a $5 million loss in the year-ago period. All financial results are in Canadian dollars, which are virtually on par with U.S. dollars.

The company warned that Hurricane Sandy cost Lord & Taylor $20 million in sales and would impact fourth-quarter results. But Baker told WWD that The Bay and Lord & Taylor are “very much fourth-quarter businesses. They usually skew stronger in the last four or five months of the year.”

In November, same-stores sales at Lord & Taylor were down 12.4 percent, but would have been up 3.7 percent if Sandy never happened, Baker said. The company’s Canadian retail operations rose 9 percent in November.

About 80 percent of Lord & Taylor’s stores were impacted by Sandy though none had serious physical damage. The superstorm did, however, leave Lord & Taylor with “moderately higher” inventories that could be managed in a variety of ways, through markdowns, insurance coverage and returns to vendors. Baker, who also holds the Canadian title of governor of HBC, said that, in the third quarter, both Hudson’s Bay and Lord & Taylor performed well, with same-store sales ahead 4.5 percent and 5.2 percent, respectively. He cited contemporary sportswear, denim, men’s wear, watches, jewelry, boots and the Topshop business inside The Bay in Canada as bestsellers. Foreign exchange rate movements and lower sales at the Home Outfitters unit of Hudson’s Bay partially offset the gains at Lord & Taylor and The Bay, which were driven by stronger storewide promotions in October.

Baker held a conference call with retail analysts, his first at the helm of the now-public HBC. The call lasted about 40 minutes and went smoothly, with only a few questions from retail analysts.

HBC, founded in 1670, operates 48 full-line Lord & Taylor stores and 90 Bay locations. HBC also operates Home Outfitters, a kitchen, bed and bath superstore with 69 locations. Lord & Taylor and Hudson’s Bay were purchased in 2006 and 2008, respectively. These were “undermanaged, poorly merchandised, tarnished brands,” Baker said. But since he took over the companies, 90 of the 100 most senior executives have been replaced, the senior marketing and merchandise teams were combined to share best practices, and the matrix has been “maximized” so new brands generate 25 percent of Lord & Taylor’s business, and 20 percent at Hudson’s Bay, Baker said. In addition, HBC is developing new omnichannel platforms for The Bay and Lord & Taylor.

“We have turned around both of these brands and laid the foundation for a prosperous future,” Baker told analysts on the call.

With the rather inauspicious results, HBC’s stock closed at $16.77 on the Toronto Stock Exchange Tuesday, representing a slight dip from $16.82 at the opening. The company approved an initial quarterly dividend of just over 9 cents a share.