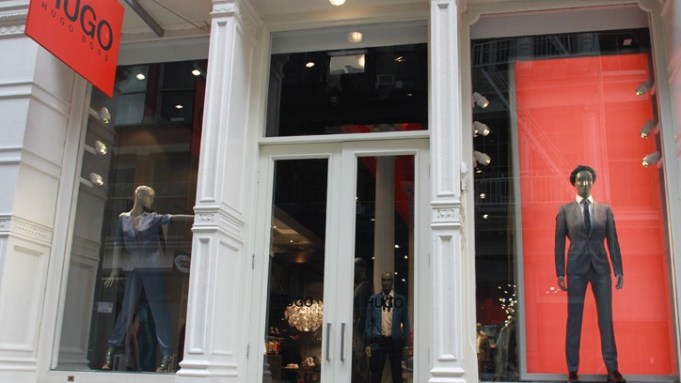 NEW YORK — Hugo has a spanking new home in SoHo.

A decade-old boutique for the most progressive of the Hugo Boss labels has been completely overhauled. As a result of the renovation project, sales are expected to increase in the high double digits.

“We’re expecting a healthy increase over historical volume,” said Mark Brashear, chairman and chief executive officer for the Americas, “or around a 40 percent increase in sales.”

Since the store, on Greene Street in Manhattan, had its soft opening on Friday, customers have responded to the updated design, the first of its kind in North America. In fact, sales on Saturday were the highest in the store’s history — “more than Christmas,” Brashear said.

The 3,400-square-foot store, which is now putting more of a spotlight on men’s tailored clothing, women’s, footwear and accessories, is similar in design to the company’s Hugo stores in Berlin and Düsseldorf, Germany. “But this is the most advanced,” said Hugo Boss ceo Claus-Dietrich Lahrs.

The store, which has dramatic red accents, high ceilings and stark-white columns, also features a relief-map wall with a black grid of SoHo and the store identified by a red box. A similar map is used in the Berlin store.

“This is the new expression of the Hugo brand,” said Brashear, pointing to the “more modern style aesthetic” of the label with its edgy, slim-cut suits for men and updated sportswear offering for both genders. “This is a nice refresh for this store.”

Although the store is 65 percent men’s wear, women’s wear was given more emphasis by its prominent displays throughout the space. “Hugo Woman is really coming into its own,” Brashear said. “We’re known for men’s wear, but we wanted to give women’s more prominence. Sales in the first three days were 55 percent men’s and 45 percent women’s, but we’re hoping they may one day be 50-50.”

Brashear said the plan is to eventually remodel the other three North American Hugo stores, in Toronto, Miami and Beverly Hills. “We will redo them when it makes sense,” he said. “And we’re always looking for more opportunities for growth.”

Lahrs said Hugo stores work well in neighborhoods such as SoHo, which have “a special mood and atmosphere” that attracts a modern-minded customer.

In larger stores, Hugo often shares space with other company labels, including Hugo Boss Black, but even then the company is careful to differentiate between the brands. “We don’t want the customer to get confused with mixed messages,” Lahrs said.

Last month, Hugo Boss reported record sales and earnings growth in the first quarter. Net income for the quarter surged 48 percent to 83.5 million euros, or $114.2 million. Operating income (earnings before interest, taxes, depreciation and amortization before special items) rose 43 percent to 132 million euros, or $180.5 million, while group sales gained 21 percent in euros (19 percent on a currency-adjusted basis) to reach 539 million euros, or $736.9 million. All dollar figures are converted from the euro at an average exchange rate for the period.

“We’re on a growth track in a worldwide way,” Lahrs said. “We’re expecting another record year in 2011.

“We’re excited that we are moving faster than the general trading market,” Lahrs added. He said that in the U.S., the consumer has become “more educated” since the recession and is responding to Hugo Boss’ quality products, “reliable fit and European design. We continue to enjoy nice momentum in this part of the world.”

Looking ahead, Lahrs said he is expecting further growth by reinforcing the company’s relationships with key department stores such as Nordstrom, Bloomingdale’s and Saks Fifth Avenue, while continuing to open its own retail stores where appropriate.

“Big growth will come from [our own] retail, especially where we don’t have strong wholesale partners,” he said.

Brashear revealed that this fall, Saks will construct a hard shop for Hugo on the sixth floor men’s department of its Fifth Avenue flagship. The retailer will build the first Boss Black women’s wear shop there as well. Canada is also becoming more important to the company. Last week, Hugo Boss reported that Lanita Layton, a longtime merchant for Holt Renfrew, had been named managing director of Hugo Boss Canada. She starts June 6 and will report to Brashear.

Brashear said Layton will focus on “strengthening our relationship with our existing partners in Canada.” He said the brand, which operates six stores in that country and has a strong wholesale presence in Holt Renfrew and Harry Rosen, is “well-represented in Canada” and distribution is not expected to be expanded. In the first quarter, earnings in the Americas jumped 98 percent on a 21 percent sales gain.

Overall, Hugo Boss’s wholesale business rose 10 percent and sales at its retail stores increased 38 percent in the period, with a comp-store sales gain of 8 percent. Seventy new doors are planned for 2011 — 15 relating to the acquisition of U.K. franchise partner Moss Bros., and one-third of the remaining 55 doors in China.