Alberto Bresci is bringing Hydrogen luxury sportswear to New York with an inaugural store in NoLIta. 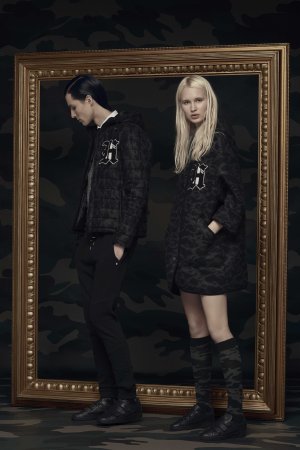 Alberto Bresci had Formula 1 race cars on his mind when he graduated from the European Business School of London. A friendship with fellow student Lapo Elkann, the Fiat heir and grandson of Gianni Agnelli, spun him in a different direction.

Elkann gifted Bresci with one of his grandfather’s old denim shirts, which sparked the idea of designing a similar shirt that was broken in and worn in the same places as the original. But instead of initials on the cuff, Bresci embroidered an Italian flag to underscore the garment’s origins.

Bresci in 2003 launched Hydrogen with a pair of white jeans, the denim shirt and a sweatshirt with the legend “Chill Out in Paris” that he made for the Buddha-Bar in Paris. “I was friends with the owner,” he explained.

From those humble but well-connected beginnings, Bresci has expanded Hydrogen to encompass men’s, women’s and children’s apparel, shoes and accessories. There’s also a tennis collection and eyewear with JPlus.

Hydrogen’s 11 freestanding stores — in Italy, Japan, China and Korea — are operated by Bresci or with partners.

In September, Hydrogen will open a 400-square-foot store in NoLIta, the brand’s first foray into the U.S.

According to Bresci, Hydrogen did 12 million euros, or $13.3 million, in sales last year. “We’ve always been a niche sportswear brand,” he said. “The goal is to go to 60 million euros [$66.6 million] in the next few years. In our mind, the second store will be in L.A., and then we’ll do something bigger in New York.”

Hydrogen’s popularity in the Japanese market should bode well for the U.S., Bresci said. “They love to mix things,” he said. “I love Italian tailoring and American sportswear. I like to mix one with the other. I started doing the tuxedo jacket with tracksuit pants. Now it’s very usual.”

Bresci continues to show the combo, and still includes camouflage fabric — which he introduced 12 years ago — in every collection. “At the time, it was very military,” he said. “It’s in my DNA. I have to keep it.” A cropped jacket in the spring/summer collection softens the camouflage print with pink flowers. Other key women’s items include the Icon skirt, a military style in cotton gabardine, 280 euros, or $312 at current exchange; Icon shirtdress, 250 euros, or $278; Lucky Star leggings, 120 euros, or $133, and Strap leather running shoes, 235 euros, or $262.

Bresci as a teenager was a promising tennis player and moved to Miami to work with a trainer. But his career was cut short due to injury. The tennis collection he launched two years ago is worn by 10 professional tennis players, four of whom are among the top 100 players in the world, he said.

Bresci is also expanding Hydrogen’s women’s offering, with the help of Alberto Biani, the designer of New York Industrie, who founded Staff International. “Women’s is a bit more tough,” Bresci said. “I’m designing with him because I need a little touch I don’t have.”

Cobranding is an important part of the brand, Bresci said. It started with Elkann again, who was working in the carmaker’s marketing department and suggested that Bresci brand a sweatshirt with the Fiat logo. “It became very popular,” Bresci said. “I didn’t have the money to make more than 1,000 sweatshirts. It was more a marketing idea.”

Bresci’s fascination with racing and engines led him to a partnership with Lamborghini, which consisted of two sweatshirts and a jacket with four-layer technology for warmth and a fleece lining. For men, classic suede loafers, handmade by Henderson, feature a camouflage print and tone-on-tone tassels, priced at 550 euros, or $613, or brown leather loafers with an embroidered Hydrogen skull patch, 450 euros, or $501. Meanwhile, a collaboration with K-Way produced a reversible Windbreaker.

“The skull comes from my traveling around the world,” he said. “I used to see skulls everywhere. I tried to use a very designed skull. At the beginning, most of my clients didn’t like it, especially in Italy. The Japanese market really liked it. Now it’s my logo.”