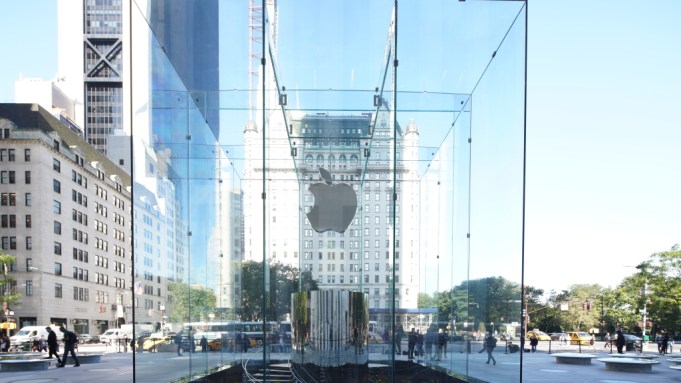 The International Council of Shopping Centers conference at Manhattan’s Jacob K. Javits Convention Center has historically been populated by retailers and those who want to do business with them. In the last few years, the ranks of the first group has decreased or shifted to the Internet, while the second has ballooned with companies offering technology for detecting fraud, boosting productivity, providing better-fitting apparel and delivering groceries directly to customers’ refrigerators, among many other things — including IoT-based solutions for high asking rents.

New direct-to-consumer brands are steeped in technology, and they’re taking no prisoners. “In fashion, everyone’s talking about change and modernity and technology,” said Leslie Vorhees Means, cofounder of Anomalie, a bridal site. “Bridal boutiques lack of accessibility in terms of inventory, design and sizing, and have super-high markups for what should be an exciting and a happy experience. We hear over and over again the frustration brides are facing. We’re trying to attack those pain points and frustrations. The key point of direct-to-consumer disruption is to provide value.”

Gen Z and Millennials are loathe to settle. If a product or service doesn’t meet their criteria, it’s sworn off. That puts pressure on physical retailers, yet 58 percent of both cohorts said that they get more excited about buying gifts in stores than online. About 90 percent look for sales before making a purchase. Men, by a margin of 54 percent, said they prefer buying gifts at a store than online, and women, 44 percent.

Microsoft is planning to make several announcements during the National Retail Federation convention in January, where the company’s chief executive officer Satya Nadella will be the keynote speaker. The tech giant created Edge, a digital solution “we built specifically for the retail industry,” said Cath Brands, director of retail product marketing. “We simplified this gigantic beast, called digital transformation, and have all these first party tools to help retailers better understand their customers and employees, and build intelligent supply chains.

“The really big thing, here, is the industry over 10 to 20 years has undergone so much transformation,” Brand said, adding that legacy retailers are asking such existential questions as, ‘Which way do I go, how do I get there, who am I?’ They’re looking toward the next decade. Most retailers are reevaluating their technology investments.”

“There are a lot of factors that go into consumer decision-making around holiday spending,” said ICSC president Tom McGee. “Promotions are high on the list, but so is experience. Retailers that are providing consumers with an incredible in-store experience, either through events or customer service, are likely to be successful, as are stores offering unique items, which is particularly appealing to Millennials.”

McGee said that rents at shopping centers are up nationally by more than 5 percent year-over-year and occupancy rates remain high at just under 93 percent. “Rent is part of the negotiating strategy for both landlords and tenants and the final price is dependent on a number of factors, including the local economy and space availability. The economy is now strong and rents and occupancy rates reflect that.”

If rents are up at malls, it may be because many of the weaker shopping centers have already consolidated, shuttered or transformed to other uses. McGee said fortress centers have also seen a material change in the type of tenants on the roster.

“Over the past four years there has been a shift in gross leasable space at malls, with traditional retail declining 6.7 percent. Services, fitness and entertainment tenants, on the other hand rose 5.6 percent and food and beverage was up by 1.1 percent,” he said. “These trends likely will continue as consumers demand more of these types of tenants at their local mall or shopping center.”

Another trend that has been growing for nearly a decade, is mixed-use properties. The latest iteration features elements that appeal to Millennial lifestyles — coworking, working out, eating out, shopping, and living in close proximity to all.

A concept recently was unveiled at Simon Property Group‘s Southdale Center in Edina, Minn., which is ironically, America’s first enclosed mall. Life Time, the owner and operator of 150 fitness clubs — which are more like luxury athletic resorts on steroids — last week opened a club as part of a new mixed-use concept occupying about 204,000 square feet of space, and exceeding the space of the shuttered J.C. Penney Co. Inc. unit it was built upon by 100,000 square feet.

“We have a handshake commitment to build 250 to 260 Life Time Living apartments,” said Life Time founder and chief executive officer Bahram Akradi. The expansive Life Time development will occupy two buildings, separated by a new corridor entrance to Southdale Center — a measure of the mixed-use concept’s significance to the property.

“We’re basically, piece by piece, adding all these elements [to the shopping center],” Akradi said. “We have 500 people in our development company. We have more architects than some of the largest architectural firms. We design, imagine, build, construct and envision the whole development,” he said, referring to malls. “My reason for going to these mall owners and presenting them with a mixed-use plan is to transform these amazing assets that have gotten dated and reinvent them to become [something] that makes it work for everybody.”

Akradi is aggressively shaking up the legacy mall with lifestyle elements that can potentially tap into new customers. Former real estate broker Jay Norris got the idea for Guesst, a store-sharing technology platform, when he realized his clients weren’t looking to open more units, but rather, shrink existing ones.

“I have a lot of tenants, but none of them can afford to expand,” said Norris, founder and chief executive officer of Guesst. “I did a bunch of pop-share deals for brands to sell their products at fully staffed and merchandised retail locations for a fraction of the cost of a pop-up shop.”

Guesst’s technology connects brands to similar or complementary retail hosts and streamlines the lease process. The brands may be direct-to-consumer businesses with little or no exposure to retail, while the host stores have extra square footage or even a few free shelves that they want to monetize. And Norris hires ambassadors between the ages of 18 and 25 — Gen Z and Millennials — who help him uncover new and interesting direct-to-consumer brands.

As shopping centers and retailers have been evolving, retail thoroughfares and downtown shopping districts have been struggling to do the same. Manhattan’s Fifth Avenue saw a steep decline in asking rent from 22 percent in spring 2019 to $3,047 a square foot, from $3,900 a square foot the previous spring, according to a report by the Real Estate Board of New York. The decrease was due to high availability and low absorption rates as tenants balked at high asking rents, which diminished demand.

“Fifth Avenue is still relevant as a commercial retail destination, but the way people relate to stores has changed and is still evolving,” said Lisa Rosenthal, a retail broker at Compass. “While retail is still an incredibly important vehicle for sales, stores are becoming showrooms. They don’t need to be as big as they were anymore.”

The Fifth Avenue Association recently hired a new president, Jerome Barth, who said, “We have great merchants telling their stories, but we aren’t really telling the stories of the area. The BID recognized that it was time to do that. We have all of our assets and an engaged board devoting significant resources to this.” Already the BID installed holiday windows at shuttered stores such as Henri Bendel and Polo Ralph Lauren, among others.

There’s also some good news on the horizon. According to retail brokers, landlords may finally be becoming more realistic in rent. “It’s creating a lot of opportunity for tenants that are well-positioned and well-capitalized to expand,” said Lee Block, executive vice president of Winick Realty. “It’s happening everywhere. We see a lot of vacancies and spaces available for sublease in all major shopping district. As rents come down, more spaces are being absorbed, but there’s still a long way to go.”

Block said large spaces on Fifth Avenue in the 43rd Street area and in SoHo aren’t getting much action. “The bigger stores are becoming more difficult to fill with single tenants, whereas in the past, tenants were looking for bigger spaces,” he said. “Tenants entering the market that want a first, second and third location are looking for smaller spaces to have an intimate boutique experience with their customers.”