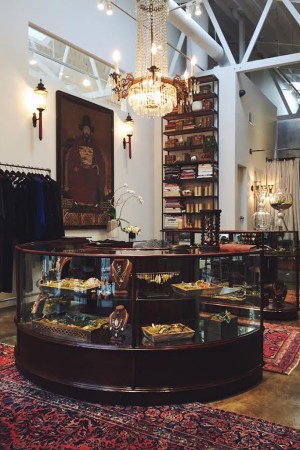 Pamela Barish, Mona Moore and LFrank on Thursday celebrate their new digs — totaling more than 3,300 square feet — in Venice, Calif., at the former home of Ray Azoulay’s antiques gallery Obsolete, which moved to a new space in Culver City.

“The three of us have been talking about doing something together for a long time and none of us particularly wanted to leave Venice, so as soon as Ray’s gallery became available, we just felt like this was the perfect space,” Barish said.

The three originally looked at the former home of L&M Arts on Venice Boulevard, which was listed for sale at $6 million, but ultimately decided to wait.

Jewelry designer Liseanne Frankfurt’s LFrank shop — which has a nod to Azoulay in the way of two 19th-century French sconces she purchased from him — connects with Barish’s store via a portico entrance. An antique door, another purchase from Azoulay, connects Barish’s space with that of Lisa Bush’s store Mona Moore.

After 11 years on Abbot Kinney, Barish said she was ready for a change of scenery — one that has come with a new set of shoppers strolling the street.

“It’s a lot less people coming in and just looking,” she said. “When they come in they’re ready [to buy] and they recognize what this is.”

Part of that are fewer tourists and more residents walking the street, Bush said. Her store, which sells items from a mix of designers, had been on Abbot Kinney for about five and a half years before the move.

“Abbot Kinney has that huge reputation so anyone who comes to L.A. probably knows about Abbot Kinney and will come there even if it’s just to see it,” Bush said. “[Main Street] feels more neighborhood-y, which I wasn’t expecting, and it also feels more polished. I love Abbot Kinney, but it was a little bit gritty. It had its pros and cons.”

Time will tell if Main Street could be one of the next up-and-coming retail hot spots as the maturity of Abbot Kinney continues with larger companies, such as Lucky Brand and Toms, settled in on the street.

“I would never have predicted Abbot Kinney [becoming popular], and when I opened my store there it was because it was my neighborhood and it was my favorite street in the neighborhood,” Frankfurt said.

She’s lived in Venice for the past 20 years and opened her store on Abbot Kinney a little over seven years ago.

“I’ve seen the neighborhood over the last 20 years and it has been really interesting to watch it evolve,” Frankfurt said. “And when I opened my store everyone thought I’d lost my mind because it was nothing anything approaching the price point I had on the street and people would say to my husband ‘Is she OK? I mean, what is she doing.…But I’ve seen it change a lot and, you know, it’s an interesting evolution. I don’t know where it’s going, but I really enjoyed being there.”