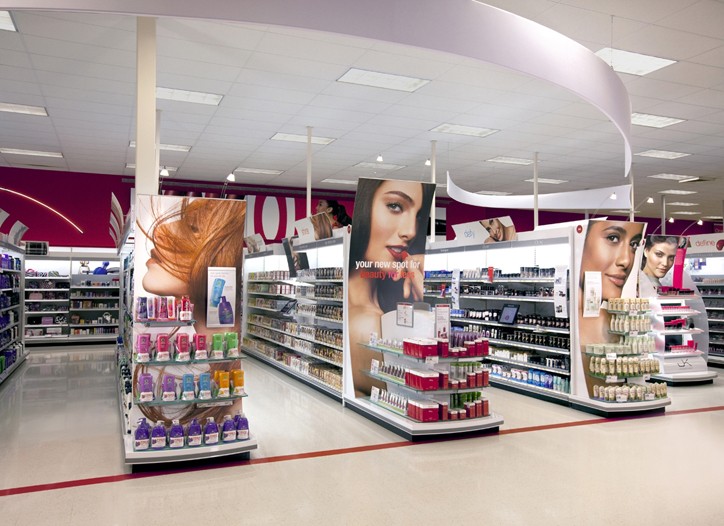 The U.S. mass establishment — which generated $38 billion in sales in 2008, according to Euromonitor International — has taken a hard look at its overflowing shelves and boldly decided to prune the assortment, trimming products and, in some cases, brands.

As part of the shift away from commodity and closer toward value, a host of chain retailers are introducing new store formats, each of which gives beauty its due with wider aisles, better lighting and colorful signage.

The moves coincide with a dismal economy, and along with it, the migration of department store shoppers to the big-box arena. But, the blueprints for these prototypes seem rooted in the retail landscape abroad.

“It is amazing to see the global impact on U.S. retailers,” said Wendy Liebmann, co-founder and chief executive officer of WSL Strategic Retail, pointing to the influence of London’s Selfridges on Bloomingdale’s 59th Street flagship and the impact of Canadian drugstore Shoppers Drug Mart on the metro-New York chain Duane Reade.

“Right now, most of the innovation in the beauty industry is coming from retailers,” said Liebmann. “It is all about getting people into your stores, getting them excited and wanting to buy.”

Many of these new formats were conceived prior to the recession, but upgrading the inside of the store is paramount to the future of retailers, said industry consultant Allan Mottus. “It is Darwinian and all about survival by finding your customer,” he said. “Store format changes are an evolving thing and are tweaked along the rollout, reflecting what works and what doesn’t. I don’t remember a time when so much format change was occurring simultaneously. This reflects how much change is occurring and the life-and-death need to survive in this environment.”

Wal-Mart has laid the groundwork for the next phase of Project Impact, having already eliminated weaker items and brands from the assortment. Wal-Mart is now in the second phase, which includes an updated store format complete with wider aisles and the removal of “action alley” — or aisle displays — from the layout, wrote SunTrust Robinson Humphrey analyst William Chappell in his report, “The Wal-Mart Walk Thru.” Chappell stated remodeled stores carry 10 percent less inventory than Wal-Mart’s non-remodeled units. The analyst expects beauty to be a prime beneficiary of the layout, stating, “Now, beauty occupies a larger chunk of real estate next to the more tangential personal care and grocery departments and is accentuated by diagonal aisles that can be easily located as the customer enters the store.” He added the new design designates 30 percent more space to fragrance, which is sold in an open-sell environment located near the checkout lanes. The beauty department is offset with fake-wood flooring and customized fixtures.

In Wal-Mart’s 2009 annual report, the company stated, “Under this plan, we expect to update approximately 700 new and existing stores this year.”

During an earnings call last month, Wal-Mart Stores Inc.’s vice chairman, Eduardo Castro-Wright, said, “The Project Impact investments helped us drive an impressive 6.9 percent increase in operating profit on a 1.2 percent sales increase during the third quarter.” He added, “The scores from the remodeled stores are growing at twice the rate of the rest of the chain. Customers love the open aisles, the ability to find what’s on their list because we have fewer inventories and the speed at which they can move through the new store.”

The concept, based on Target’s consumer research, began as an eight-store test in the Chicago area, said a Target Corp. spokesman. “We are offering customers the opportunity to learn more about the products but also test them,” he said. “The big idea is to create a [beauty] environment unlike any other in the mass market.”

Target also has pared back its merchandising assortment, cutting 5 percent of its stockkeeping units this year, the company told analysts during its November earnings call.

Drugstores are aggressively overhauling their chains, too, with perhaps Walgreens making the most sweeping changes to its assortment. The 7,000-store chain continues to implement its CCR initiatives, designed to boost front-end sales.

At an investor conference hosted by Morgan Stanley on Nov. 19, Walgreen Co. president and ceo Greg Wasson said, “We are updating store layouts, we’re improving product groupings and redefining the overall product selection, all aimed at improving the customer experience and increasing the number of visits and basket size.” He continued, “We’re on track to deliver the results we want. We’ve completed our CCR rollout in the Houston and Dallas markets. In fact, I was down there two weeks ago, visited both markets and several stores. I came away very pleased. I think the stores have come through the transition in a very good way. Better sidelines, less clutter, brighter looks, good customer feedback.”

Last spring, Wasson told WWD, as part of its first round of inventory reductions, Walgreens’ trimmed about 17 percent of sku’s across the entire store.

The CCR initiatives are visible in a Walgreens store in Hillsborough, N.J., where there are more convenience foods and an emphasis on core categories, including greeting cards, over-the-counter medications and beauty. The biggest change over older departments is illumination of the beauty fixtures. There is also better signage, lower profile fixtures and a streamlined beauty consultant area.

Walgreens’ physical store changes are not as dramatic as Duane Reade’s recently unveiled Look Boutique, but they do reflect a bid to elevate the shopping experience. Earlier this month, one of the architects of the CCR format, Chong Bang, Walgreens’ divisional merchandise manager, announced he is leaving the chain for a position at Shoppers Drug Mart.

Store format changes at Walgreens’ closest competitor, CVS Pharmacy, center on beauty. Since introducing its upscale concept in November 2008, CVS has outfitted five of its 7,000 stores with Beauty 360 and plans to end the year with about 30 units. Next year, an additional 50 are planned, said a CVS spokeswoman. Beauty 360 stocks some 40 brands, including Vincent Longo, Cargo and Lola in cosmetics; Mario Badescu, Bioelements and H20 Plus in skin care, and, in fragrance, Prada and Carolina Herrera.

To retrofit stores with Beauty 360, CVS typically clears out 3,000 square feet of space in an existing store, which is connected to the upscale concept via two breezeways. Each unit also has a treatment room.

In an eyebrow-raising move — at least to denizens of Manhattan — Duane Reade introduced a sleek beauty concept called Look Boutique in late October. The effort ties into Duane Reade’s yearlong, chain-wide effort to elevate its image — notorious for lackluster service and overstuffed aisles.

The Look Boutique includes circular fragrance counters filled with department store scents, including Lacoste, Juicy Couture, Usher, Burberry and Gwen Stefani’s Harajuku Lovers, to name a few. Tester fragrance bottles are tethered to the display, which also serves as the checkout counter for the beauty department. Brands in the department include, among others, Too Faced, Pür Minerals and Pop Beauty.

The 250-plus store chain plans to open 30 more renovated or new units next year, half of which will likely contain the Look Boutique, said Joe Magnacca, chief merchandising officer.

In the Duane Reade concept, the premium brands are located in close proximity to the store’s traditional mass market offering, unlike in CVS’ Beauty 360, which has a wall separating the boutique from the rest of the store.

Tony Oppé, ceo of Pixi, which is sold in Target, and Pop Beauty, sold in Beauty 360 and Look Boutique, said he decided to take a risk and strike distribution deals for his premium brands in the mass market. He said his research indicates consumers are shopping across all channels and buying upscale goods at mass without hesitation.

“This whole division between mass and prestige is going to break down more and more. The term ‘mass’ is outdated,” said Oppé. “The wider the distribution, the better it is for the brand and the retailer.”

Even Sears, which abandoned beauty some years ago, is jumping back in. “I’m pleasantly surprised with what they’ve done and it seems to be bringing people back to the store,” said one source.

And Ulta continues to nip at the heels of the department store business model by attracting upscale brands to its hybrid beauty mix. Some of the most recent additions include Philosophy, Benefit Cosmetics and, in a limited store test, Clinique.

Extreme makeovers also are happening upmarket, with Bloomingdale’s overhauling its entire beauty floor at its 59th Street flagship, and renovations at Saks Fifth Avenue, as well.