In a Troubled Time, U.S. Online Discounting Ratcheting Up

Retailers and brands could get into early clearance mode as inventories mount amid store closings and dwindling shopping.

As fashion inventories back up amid the coronavirus, discounting will accelerate.

It’s an e-commerce moment in the midst of the spreading COVID-19 pandemic — and dot-com discounting will soon be in high gear.

Online, brands in the U.S. this week began to ramp up deals, free delivery and services, attempting to offset losses from closed stores. But any online gains won’t be anywhere near enough to make up the shortfall, and to complicate the problem, online orders are less profitable than in-store purchases due to the logistics and shipping involved, particularly if they’re shipped to homes rather than made available to customers to pick up in stores or curbside.

On Thursday, J.C. Penney was offering 40 to 50 percent off select spring styles and free shipping for any purchase of at least $49. Neiman Marcus was offering 20 to 25 percent off site-wide on select regular-priced and sale-priced merchandise, and up to 40 percent off on new markdowns.

Macy’s was offering “an extra” 30 percent off and free shipping for purchases of at least $25, and 25 to 30 percent off clearance goods. On the Macy’s web site, Michael Kors items were priced 25 percent off, and the private Macy’s brand INC was 30 percent off.

While the online discounting accelerated, the cacophony has not reached Black Friday or Cyber Monday levels — at least not yet. As industry sources told WWD this week, as the pandemic crisis goes on, retailers and brands will find themselves stuck with more and more seasonal merchandise, forcing steeper discounts. Moreover, there are looming concerns about merchandise returns and fall and pre-fall cancellations by retailers.

“Retailers that have real in-season, spring fashion merchandise will be hit hard,” said Coyes Nokes, partner in the consumer and retail practice of OC&C Strategy Consultants. “There will be big discounting for apparel retailers left with inventory. For those selling staples, you won’t see as much discounting.”

Coyes noted that, long-term, after the coronavirus subsides, “You will see a bit of reset in participation in e-commerce. Some people who haven’t before gone online are now being forced to try it and will continue to engage with it in some form when we come out of this intense period.” Ahead: possible store closings beyond what retailers had planned pre-coronavirus.

Coyes noted the sharp shift to e-commerce already happening In China, citing statistics indicating that during January and February, retail sales overall in the country plummeted 20 percent but within that, there was a 3 percent e-commerce gain.

Online, according to industry sources, apparel hasn’t entirely gone south, with some demand holding up for loungewear and casual products like sweats, slippers and T-shirts, ideal for staying indoors as more people work from home, and comfort. Other bestsellers online correspond to social distancing and hunkering down at home, including electronics, particularly keyboards and monitors; wellness products, vitamins and skin care; furniture and tabletop items, as well as the obvious demands for food, pharmaceuticals and paper products.

Kate Spade on Thursday offered up to 75 percent off everything, including a “deal of the day,” a laurel way large carsen crossbody bag priced $59 from the original $229 price. Nordstrom launched a 25 percent off limited-time savings site-wide, with free shipping thrown in. Need Supply, a web site selling a range from casual men’s and women’s apparel, accessories and footwear to candles, sunscreen, tabletop and bento boxes, offered 25 percent off.

Designer John Elliott, whose family is filled with physicians, has made a $10,000 donation to the UCLA Health Fund and has pledged to donate 10 percent of sales on a couple of pieces that have been marked down 25 percent to the UCLA Health Fund. That includes the Hooded Villain and Escobar Sweatpants from his mainline collection.

“My family has dedicated their lives to helping people, and it’s something I’ve always been inspired by,” Elliott said Thursday. “My dad, brother, aunts and uncles are all physicians. My sister-in-law is a physician at UCLA. In these difficult times, I asked them what we could do. Their response was to give to our local hospital — to support medical personnel on the front line who are putting others before themselves. As of today, we’ve pledged to donate $10,000 to UCLA Health Fund — Coronavirus Greatest Needs in Patient Care. We hope to get to $100,000.”

Some web sites got creative. Ulta has been advocating its AI technology whereby you get on the app, take a photo of your face, and virtually apply lipsticks and makeup and see online what you look like with these products without actually trying them on. Casetify, a web site selling custom cell phone cases and tech accessories, was offering free sanitary wipes with every order. And the Thursday Boot Co. ran a contest for a $250 gift card, and 20 $20 gift cards. Saks offered 15 percent when using the Saks app.

According to Jefferies Research, demand at Best Buy was highest for keyboards, webcams, laptops, as well as freezers and refrigerators to stockpile food. “Anecdotally though, we are hearing of dual-income households shelling out $200 for an extra display screen to make these days more comfortable,” according to Jefferies Research. “Our analysis of Google searches shows interest in computer monitors are matching Black Friday volumes, which we believe speaks to the magnitude of spend being allocated to consumer electronics as consumers work remotely.”

Jefferies also noted that “big box retailers are beginning to adjust store hours, though they have been firm [thus far] in keeping doors open to serve local communities in this time of need.” That would include retailers like Walmart and Target, which sell food as well as basic necessities.

According to investment research firm Jane Hali & Associates, retailers that offer effective alternatives to in-store shopping, such as online services, online incentives, speedier deliveries and curbside pickups, have the best chance of reducing the coronavirus impact. Walmart, Ulta, Target and Nordstrom, among other retailers, have curbside pickups in many locations. Out of these key retailers, however, Walmart will pick up share since about 55 percent of its mix is in groceries, according to Hali.

Some retailers that have temporarily closed stores, such as Macy’s, have postponed pickups at their stores. Macy’s said online orders shipped to stores would be rerouted to customers’ homes. But Hudson’s Bay in Canada, which has also temporarily closed all of its stores, said that for order-online, pickup-in-store, curbside pickup is available from 10 a.m. to 3 p.m. 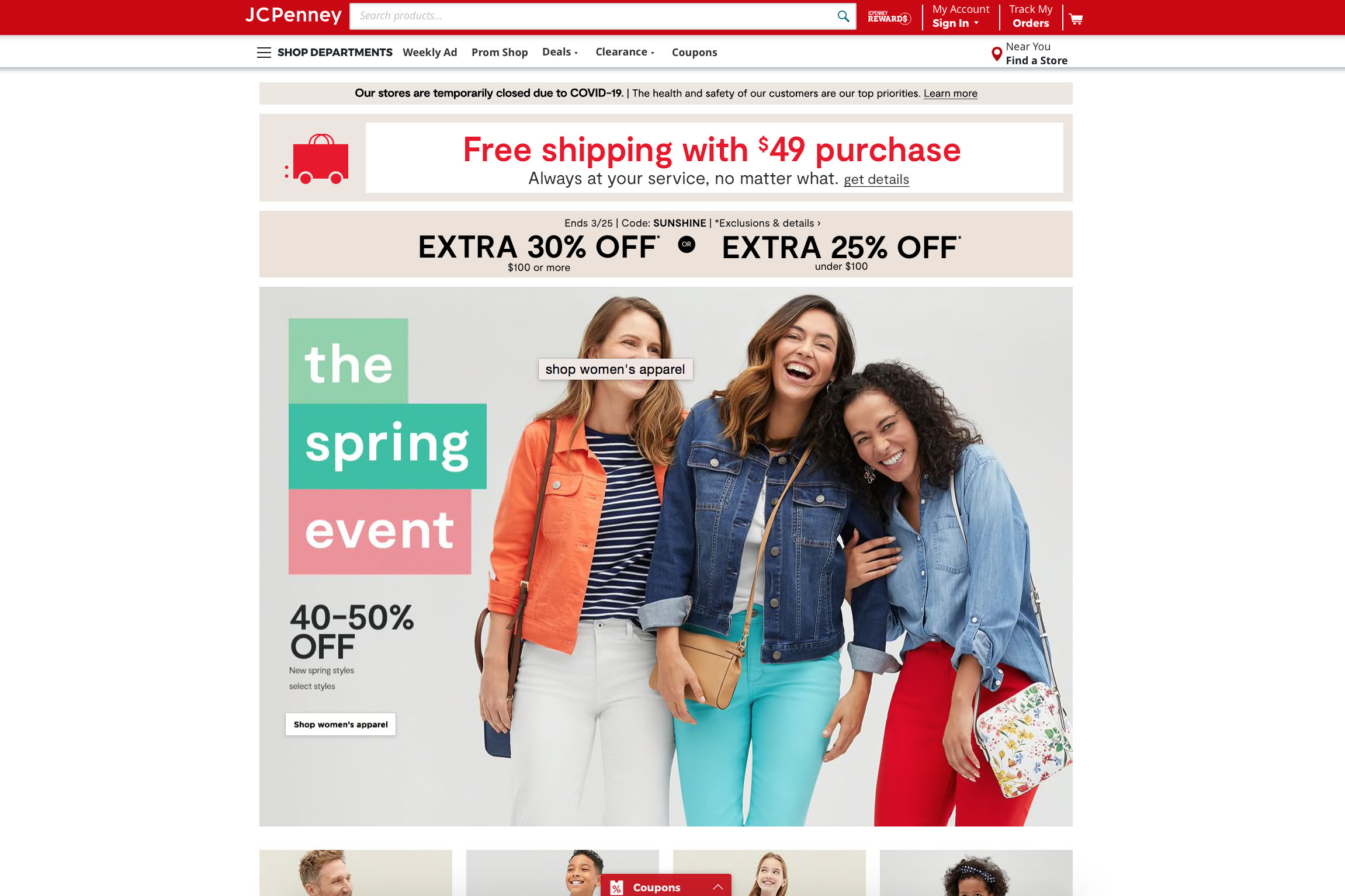 While the discounting inevitably ratchets up, according to Hali, “Retailers and brands need to create marketing strategies that enhance a sense of security, well-being and promote calm. Over the coming weeks consumers will be seeking greater assurance that the products they buy are free of risk and of the highest quality when it comes to safety standards, particularly with respect to cleaning products, antiseptics and food items.

“We saw Walmart being promotional on home goods, with people setting  up to work at home and needing furniture and technology,” Hali said. “West Elm is doing a lot of messaging around entertainment, working at home, being more comfortable indoors and a mental state of wellness. Social media is playing a part in that, too,” with messaging around mental wellness, keeping busy, self care and to-do lists.

“Companies are not going crazy yet,” with discounting, Hali said.

Asked about how the virus could alter shopping behavior after the virus subsides, Hali said, “People will always go into stores, but now many will learn to do much more online that they didn’t before. Those retailers that have seamless omnichannel operations are going to benefit. That was happening already.”