In Demand in Contemporary: What’s Selling for Spring

Jumpsuits and crop tops have emerged as bestsellers in contemporary departments at major department and specialty stores. 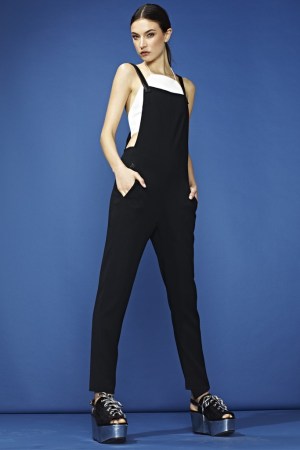 Are consumers opening their wallets at last?

That’s what retailers are hoping as spring weather begins to arrive nationwide and shoppers emerge from their long winter’s hibernation to refresh their wardrobes. Executives believe this spring could see strong sales given the long winter as well as that female shoppers have not updated their wardrobes in some time.

“The apparel business has really not participated in the last few years in any significant way in terms of the overall growth of our company, and we’ve had fairly significant growth, and so that means to us that it’s not in her closet,” Terry J. Lundgren, chairman and chief executive officer of Macy’s Inc., said last month at the Bank of America Merrill Lynch Consumer & Retail Conference. “So, the customer needs new apparel….I definitely believe there’s pent-up demand for apparel.”

The ICSC said Tuesday that retail sales last week scored their biggest sequential advance of the year, although lingering wintry weather kept a lid on apparel sales. The ICSC and Goldman Sachs weekly chain store sales index rose 3.6 percent in the week ended Saturday compared with the prior week, the strongest gain since 2014 began. However, the year-on-year advance was 0.6 percent, the lowest gain since a flat finish in the week ended Feb. 1.

Year-on-year comparisons were depressed by the timing of Easter, which last year fell on March 31 and this year occurs on April 20.

Department and specialty store retailers say that contemporary sportswear is selling briskly this spring, and the jumpsuit is an item that women don’t already have in their closets.

Cropped tops are another spring winner, as well as colors and prints in coordinated skirt and top sets, according to a spot check of retailers, who were asked to name their number-one bestseller this spring.

“The best thing to happen is jumpsuits and rompers,” said Brooke Jaffe, operating vice president, fashion director of ready-to-wear at Bloomingdale’s. She said she’s doing well with jumpsuits by Aqua, its private label brand, as well as Catherine Malandrino, Helmut Lang, Diane von Furstenberg and Parker. “Any brand that’s made a jumpsuit for spring is doing well. We’ve reordered and [are] trying to get as many units as possible,” said Jaffe.

The black jumpsuit is a replacement for the little black dress, said Jaffe. “People will wear the rompers with sandals, or slip-on sneakers,” she said, adding it can be worn as “festive” dress or as rompers to music festivals.

The trend began in February in warm weather markets, and it’s been going strong ever since, she said. She also noted that denim overalls are seeing a lot of action. “One-piece dressing is transcending fabrications,” Jaffe said.

Colleen Sherin, senior fashion director at Saks Fifth Avenue, was also enthusiastic about the jumpsuit. She said it’s selling from the casual overall style from Rag & Bone to a halter jumpsuit from Diane von Furstenberg, and a casual jumpsuit from Vince. The idea of “all in one” is a bestseller, from casual to dressy evening, incorporating both overalls and jumpsuits, added Sherin. “I called it out as a trend. It is an item that many women don’t have in their closets.” She also said it’s easy to wear and for the same reason that dresses have success, “you put it on and it’s ready to go. It’s easy to move in.”

The number-two bestseller in Saks’ contemporary departments is “the crop top.”

“It’s a trend that’s all over the market,” said Sherin. She said Milly had a good one, which was a scuba-style crop top, worn with a slim skirt with a higher waistline. Another cute one came from Clover Canyon with a matched skirt.

“Crop tops are being paired with high-waisted bottoms,” she said. The best-selling style has been AG’s high-waisted Farrah skinny jean. “Because it has been so successful, we are continuing to buy into this trend within the premium denim category,” she said.

The new summer jacket is “the bomber” and Pisane predicted the silhouette will gain momentum going into fall. The best-selling bomber is from Blank NYC.

Lastly, she said dresses are selling well, especially ladylike silhouettes. An exclusive style from Cynthia Steffe in a floral jacquard with collar and cuff detail is a bestseller.

According to Barneys New York, its best-selling items this spring in the contemporary department have been Isabel Marant’s plaid jacket, jumpsuits from Raquel Allegra and the Barneys brand and R13 Boy Skinny in black marble.

Heidi Hoelzer, the head women’s merchant at Scoop, said: “We are having a great reaction to our swim department,” including a Missoni fringe cover-up.

“Novelty knits have also been very strong,” she said, noting in particular an IRO white tank.“Knit dresses is a classification that does not seem to be slowing down.”

She said a Zac Posen exclusive white maxi and an RVN dress have sold well. Lace has also been a hot seller and Hoelzer cited a Nightcap exclusive fit-and-flare dress.