Major retailers, such as J.C. Penney Co., as well as bridal chains like David's Bridal and BridesMart Bridal and Internet entrepreneurs are trying to tap into the sales potential of the growing U.S. Hispanic population. 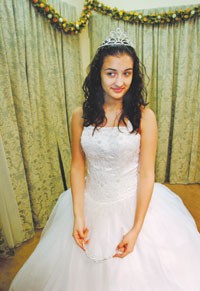 DALLAS — Bianca Villarreal had been to 10 stores, and at La Parisina in south Dallas she finally found the dress.

She looked like a bride as she modeled the strapless white gown with a beaded satin bodice and fluffy tulle skirt. However, the poufy confection was for her quinceaiera (pronounced “keen-say-nyair-a”), a 15th birthday celebration for Latin American Roman Catholic girls that is a cross between a Bat Mitzvah and a debutante party.

Major retailers, such as J.C. Penney Co., as well as bridal chains like David’s Bridal and BridesMart Bridal and Internet entrepreneurs are trying to tap into the sales potential of this rite of passage as the U.S. Hispanic population grows. The Census Bureau forecast it will soar to 69.4 million in 2025 from 37.4 million in 2002.

Villarreal studied the $400 gown — by PC Mary’s of Houston — in the mirror. “It’s not too much, and it doesn’t have too much sparkle, but it’s not too plain,” she said, sizing up how she would look at the party for 225 guests that was held May 14 at a Ramada Inn in a Dallas suburb.

Like several other 14-year-olds trying on voluminous gowns at La Parisina, Villarreal said she was shopping in specialty stores owned by Hispanics that focus on quinceanera. This niche of retail is becoming more competitive.

“We see it as an outstanding opportunity,” said Manny Fernandez, director of multicultural marketing at Penney’s, based in Plano, Tex. “By the year 2010, 47 percent of all teens in the U.S. will be Latinos. When you look at that vast number in population, and the fact they are starting to celebrate their culture more, particularly in metropolitan markets, it stands to reason that you will see this business growing.”

Sixty-seven percent of U.S. Hispanics trace their ancestry to Mexico, where quinceanera has origins in an Aztec coming-of-age ritual that evolved to include a Catholic liturgy. Most quinceanera events begin with a special Mass at which the girl reaffirms her commitment to Christianity. A reception follows with music and dancing.

For retailers, selling opportunities go beyond the dress. The celebrant sometimes has a “court” of as many as 14 boys and/or girls who are dressed in tuxedos or gowns.

This story first appeared in the June 1, 2005 issue of WWD. Subscribe Today.

The quinceanera herself usually gets gifts of fine jewelry and a doll, which symbolizes her last doll, a pillow to kneel on in church, a tiara, a Bible, a rosary and sometimes gloves and a scepter.

Adhering to custom is of vital importance to immigrants, said Caroline Brettell, an anthropology professor at Southern Methodist University in Dallas, who is studying how new immigrants are shaping some of the nation’s cities.

“First-generation immigrants are living in two worlds, and part of their identity comes with them from the world they left behind,” Brettell said. “The first generation does it for their own children as a way to expose them to their cultural traditions, which first-generation groups take very seriously.”

Brettell cited an Indian wedding she attended in Irving, Tex., at which the groom arrived in a carriage drawn by a white horse and was greeted by scores of guests in Indian garb dancing outside the hotel. The pageantry mirrored a traditional wedding in India.

Quinceanera “is a very important thing for a young woman,” said Dolores Barzune, a fifth-generation Hispanic Texan and a prominent arts fund-raiser in Dallas. “It’s a big party and a lot of fun. Everybody tries to look beautiful.”

At least 40 percent of Mexican-Americans — and probably more — retain the tradition, said Jose Limon, director of the Center for Mexican American Studies at the University of Texas in Austin.

“It is clear to me that in the last 10 years it has taken an upswing with the increase in Mexican immigration and the increase in the Mexican-American middle-class sector,” Limon said.

Traditional families say the event presents a young woman to God to receive the blessings of the church before she ventures into the secular world. The implication of the dancing is that she is ready to meet males. For the professional middle class, it’s an opportunity to display material success.

“We’re not talking about millionaires here,” said Limon, who is writing a book about Mexican-American middle-class identity. “But…it is a display of their achievement, and the best way to do that is with a really knockout dress.”

Some in retailing are tapping into the potential market, while others lag.

Peg Canter, vice president of trade shows at the Dallas Market Center, began thinking about how to cater to the quinceanera market last June after reading that Hispanics were underserved by the fashion industry. Most of the top 10 Hispanic markets are in Texas, and the average quinceanera party costs $8,000 to $10,000.

“I thought, ‘Here we are in the middle of it all, and what are we doing about it?'” Canter recalled. “This is a golden opportunity.”

The market center started to seek out Hispanic retailers, as well as bridal stores and vendors who make quinceanera-style dresses. It sent a promotional mailer to 4,000 Hispanic-owned stores nationwide and dispatched three staffers to visit Hispanic retailers in major cities to invite them to shop.

“I found out that a lot of the Hispanic stores … are not comfortable coming to our market,” Canter said. “They don’t feel their language is spoken, and nothing is in Spanish. What we want to do is roll out the welcome mat,” including translators and free long-distance phone service.

Yet quinceanera “is not on the radar” at Neiman Marcus, the Dallas-based luxury powerhouse, “but maybe it should be,” said Shelle Bagot, vice president and general manager of the Dallas flagship. The store has sold a few dresses to employees for their daughters.

Stanley Korshak, a Dallas specialty store that features bridal gowns in its luxury mix, has not had demand for quinceanera dresses. “We’ve had quite a few Hispanic debutantes, and we’re seeing more of those, but we’ve not seen a single quinceanera girl,” said Nina Austin, director of the bridal salon. “Those dresses are usually a lot more frilly than what we have.”

For other retailers in big Hispanic markets, quinceanera is a mainstay. The former Burdines-Macy’s, which now uses only the Macy’s nameplate, with 63 stores in Florida, has considered quinceanera part of its junior dress business for a decade.

“It does well,” said Carey Watson, senior vice president of marketing. “You can always depend on it.”

Besides serving local communities, the chain has linked with tour operators in Latin American countries to promote quinceanera shopping trips.

“Now the American businesspeople are starting to see what quinceanera really means,” said Gilbert Garza, who owns La Parisina. “We have more competition.”

Fine jewelry is one of several areas that Penney’s has begun to target for quinceaneras. The retail chain last year introduced a collection of 14-karat-gold quinceanera jewelry in more than 100 stores in its largest Hispanic markets — Los Angeles, New York, Miami, Houston, Chicago and Dallas, as well as border cities such as McAllen and Laredo, Tex., and Yuma, Ariz. The company is looking into offering quinceanera dresses and a registry in Spanish, Fernandez said.

“Our Hispanic stores are growing at a faster rate than the total company, and we felt this was another opportunity to demonstrate to the Hispanic customer that we are serious about their business,” Fernandez said. “We are facilitating everything that surrounds the quinceanera, from the dresses that the girls in the court wear to the tuxedos for the guys, apparel for the parents and salon photography.”

Another company seeking to capitalize on this business is David’s Bridal, a subsidiary of May Department Stores Co. It is the nation’s largest bridal chain, with 242 stores and 12 more set to open this year. David’s Bridal plans to introduce a Spanish edition of its Web site, which features quinceanera dresses as well as bridal gowns. The company has gotten more aggressive with quinceanera merchandising and is doing research on the Hispanic market.

“They found us before we started to market to them, because the similarities between bridal gowns and quinceanera [gowns] are very striking, so it was a natural outgrowth for us,” said Cindy Freeburn, vice president of public relations for the company. “And there are other benefits: The quinceanera [girl] is 15 years old, and her attendants range from young girls to older sisters, so they are our future brides and bridesmaids. It’s a great opportunity to introduce the customer to all that we have to offer.”

David’s Bridal also seizes the chance to refer shoppers to its tuxedo chain, After Hours, for outfitting male attendants. After Hours stocks cummerbunds and ties that match the palette at David’s Bridal.

There is also a growing quinceanera business online. John Crow, owner of WeddingAccents.com in San Jose, Calif., offers quinceanera dresses retailing from $80 to $160, as well as accessories.

“The beauty of the Internet is we have customers all over the U.S.,” Crow said.

And bridal manufacturers are getting in on the action. Alfred Angelo introduced its first quinceanera collection for spring selling this year, as did Mori Lee.

“We’re actually astounded at the response,” said Madeline Gardner, designer and a principal at Mori Lee. “We’ve sold many of our bridal accounts and specialty stores who cater to the quinceanera in southern Texas.”

The company declined to forecast sales.

The quinceanera typically wears a full-skirted white or pastel gown. Because she must look modest during the Mass, the dress often has a matching shawl, jacket or removable sleeves that come off for the party. Unlike brides, quinceaneras don’t wear veils or have trains.

The most experienced manufacturer may be PC Mary’s of Houston, which got into the category about 20 years ago when it discovered its bridal dresses appealed to quinceaneras. The company didn’t break out quinceanera sales.