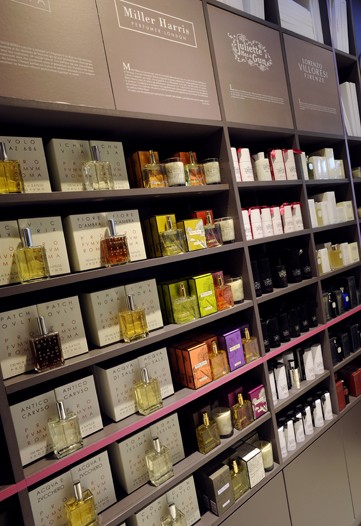 PARIS — Hot off the press is Aépure, a new beauty concept store selling solely independent brands from around the globe. It was opened on Paris’ Left Bank Thursday.

Located at 35 Rue Guénégaud in the heart of the sixth arrondissement’s gallery district, the 1,200-square-foot selling space has a magazine theme that’s evident throughout, from the stacks of actual magazine paper serving as podiums (five tons, in fact, were delivered to the store for that purpose) to the articlelike explanations of each brand lining the walls.

“They are brands with a soul,” he said, adding each was chosen to complement the others, among various criteria.

His store, whose streamlined design was conceived with Olivier Saguez of Saguez & Partners, is chockablock with fake books, some of whose bindings read “Extraits de Beauté” (or Beauty Extracts, in English).

Aépure is divided into three color-coded rooms, which de Grossouvre likens to a magazine’s “columns.” There’s “Cocon” (Cocoon), the main area painted white that is just inside the front door. Here are 32 treatment brands for the face, hair and body, most of which have formulas containing plant-based ingredients. Among them are Evidens de Beauté, Yu Be, Christophe Robin, Sacha Juan, Snowberry, Taer Icelandic, Antipodes, Dr. Bragi, Mama Mio, Erbaviva, Rodial and Lucia Iraci.

The “Séduction” (Seduction) area, brown in hue, includes nine fragrance brands, such as By Kilian, Juliette Has A Gun, Lorenzo Villoresi Firenze, Miller Harris and Nasomatto. To facilitate the trialing of scent, de Grossouvre has created and implemented a system of glass bottles — one for each fragrance — in which a juice is suspended in a type of gas. This allows for an entire scent, including its top, middle and base notes, to be sampled at once, he said.

The Séduction section has five brands selected for their products’ well-being properties, as well, such as The Laundress, Abahna and Yes For Lov.

Aépure does not have any makeup products, but starting in September it will carry one yet-to-be-announced mineral color collection that’s to be exclusive to the store outside of the brand’s home market.

At the back of Aépure is a “V.I.P. space,” where brands may give complimentary facials or meet with distributors and journalists.

Although many brands in Aépure are not sold elsewhere in France, de Grossouvre does not intend to maintain their exclusivity. Rather, he plans to nurture brands so that they can expand their distribution. De Grossouvre intends to make Aépure’s brands accessible to everyone.

De Grossouvre said he plans to open seven Parisian stores within three years. Locations abroad should debut in 2010. (In North America, Canada is a possibility, although the U.S. is not in the near term.)

The name Aépure, a newfangled word, was chosen for numerous reasons in sync with the concept’s philosophy.

“There is the notion of purity inside,” explained de Grossouvre, referring to a play on the French verb “épurer,” which means to purify or refine.

De Grossouvre added, “In French, it is — above all — the best of something.”