In Toronto, Holt Renfrew Gets a Bright Makeover 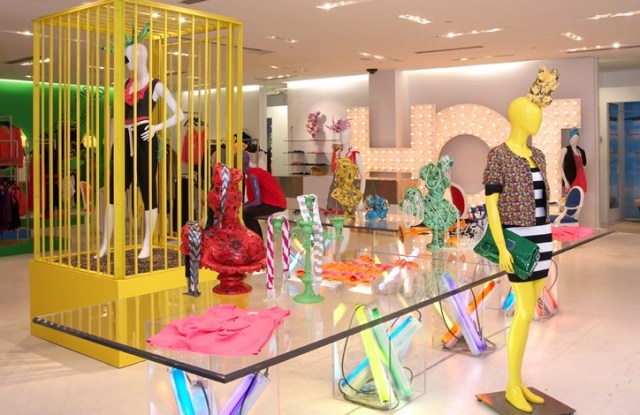 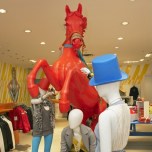 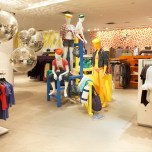 When John Gerhardt, Holt Renfrew’s creative director, received a bright green wallet as a gift last year, he was inspired. Now the result is in, and it comes in the form of the store’s new, brightly lit, colorful, redesigned contemporary floor.

“I had this wallet, and every time I took it out of my pocket I was just happy,” Gerhardt said. “I couldn’t figure out what made me so happy when I looked at it, but eventually realized it was the color — color has such an amazing way of transforming a mood.”

And so, Gerhardt, who had already been planning to give the Toronto flagship store’s contemporary area a facelift, decided to make color — mostly primary Pantone colors — a focal point.

The 8,928-square-foot space has gone through a complete metamorphosis, Gerhardt said. Before, the idea was to leave the walls a basic white in order to bring attention to the clothes on the racks. Now there are splashes of color throughout — an orange cheetah-printed wall is the backdrop for D&G’s spring mix, while giant disco balls hang over fixtures displaying more of what the season has brought in. Mannequins are seen throughout the floor and some can almost be mistaken for browsing customers — one is pushing a shopping cart, others are decked in motorcycle helmets wearing Alexander Wang dresses and another is enclosed in a giant neon-yellow metal cage. Whimsical art influences from such creatives as Dan Flavin, Shepard Fairey and Barbara Kruger can be seen throughout the space in oversize sculptures and paintings.

“We made it so the color enhances the clothing and works with the clothes, not against them,” Gerhardt said. “Right now we have an Eighties theme going on, but the floor will continue to evolve every season with new fixtures and artwork coming in. We will be changing it much more than we used to.”

The floor, which only took about a month to complete, was a true construction project — walls were demolished in order to create more open space, new electrical wiring allowed for brighter, more vivid lights and giant sculptures were brought in to bring more life to the space.

New brands were purchased for spring including Current Elliot, LaRok, Larsen Grey, Opening Ceremony and Erin Wasson X RVCA, to mix with the floor’s range of brands such as Elizabeth and James, 3.1 Philip Lim, Alice + Olivia, Rag and Bone, Mike & Chris, Seven For All Mankind and William Rast.

To help bring in more customers, the store is hosting an event every Saturday, ranging from designer appearances, manicure stations and art installations to guest DJs, graffiti artists, surprise musical performances and fashion shows. While the new design has only hit the retailer’s Blor Street flagship location, Gerhardt said Holt Renfrew is planning to roll it out to all nine locations throughout Canada, including the two others in Toronto; Ottawa; Montreal; Quebec City; Vancouver; Calgary, and Edmonton.