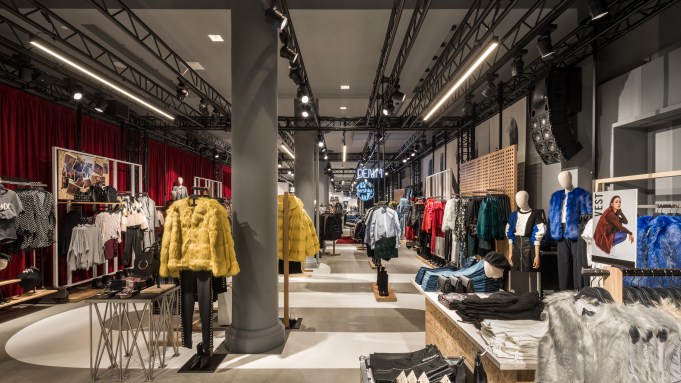 NEW YORK — Zara’s younger sibling is dipping its toe into the American market.

Today, Bershka, the juniors and young men’s division of Spanish powerhouse Inditex, will open a pop-up in SoHo here that is ostensibly intended to celebrate the company’s launch of its online store in the U.S.

But the store, which spans two floors and measures more than 8,000 square feet, suggests that the corporation is testing the teen market to see if it can carve out a niche here.

Bershka, which was established in 1998, has more than 1,000 stores in 71 countries and is the sister brand to Zara, Massimo Dutti, Pull & Bear and others. It was previously unavailable in the U.S. Bershka represents 9 percent of Inditex’s annual sales, which hit 11.67 billion euros in the first half of this year.

A company spokeswoman said the store, at 580 Broadway in SoHo, will remain open for only three months and no other American pop-ups are planned. Even so, it sports a design similar to the company’s other flagships in Europe, complete with movable shelving units, fixtures made from recycled wood and sections specifically designated for each product category.

“We won’t keep this store, but we’re always looking for opportunities,” the spokeswoman said.

Beyond that is the BSK  line, which is skewed to a younger customer and has a casual, almost rock-‘n’-roll aesthetic with graphic Ts and vinyl biker jackets. There is a separate section for jeans and related product; accessories and footwear are offered throughout the space.

In the rear is the men’s section, appropriately named Man. It has a similar vibe to the women’s wear and includes denim jackets, sweatshirts, wool coats, camo joggers, plaid pants and parkas with faux-fur hoods. The men’s area also has a separate denim shop.

Downstairs is more of the same with an added emphasis on footwear, accessories and makeup and spots to hang out while browsing. The store also offers the Start Moving sports-oriented collection.

New merchandise will flow into the store on a weekly basis and when something is sold out, it is not replenished, the spokeswoman said.

The spokeswoman acknowledged that the teen market in the States is tough right now, but is confident that Bershka will find its place. “It’s the right moment,” she said with a smile.

The company will host a launch event for the store on Oct. 27.