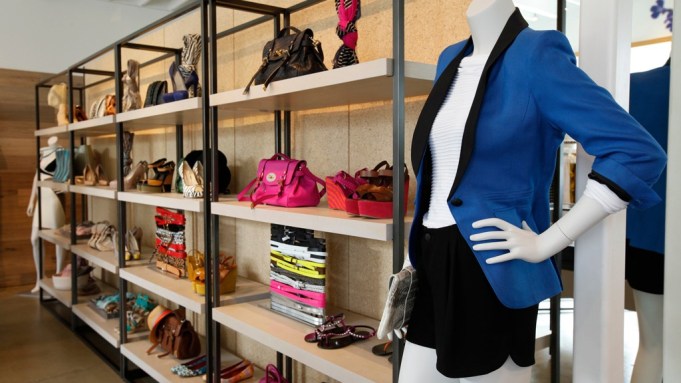 LOS ANGELES — Intermix is getting bigger.

The foundation for the fashion specialty retailer’s next retail push was laid last year when, in short order, it opened stores in the U.S. suburbs as well as its first store outside the country. The resulting discovery that its model resonates with more than just urban Americans has spawned a three-tiered growth strategy to spread Intermix units in major American metropolitan areas that may or may not already have existing units; those areas’ feeder communities, and abroad, initially with wholly owned stores in Canada before partners roll Intermix out across the globe.

“We always have a main flagship and a smaller, satellite store nearby. Once we get that done, we’re really going to focus on the international,” said Intermix chief executive officer and founder Khajak Keledjian, during an interview at the new Brentwood Country Mart store here, an example of the retailer’s fill-in expansion as one of what will soon be five stores in Southern California. Further addressing Intermix’s suburban expansion, he added, “We didn’t know it [would succeed] until we opened the one in Greenwich [Conn.]. We’re more of an urban player, but we do well with a diversity of customers from the young girl in her 20s who’s fashionable and trendy to the one who’s professional to the one married with younger kids and more of the sophisticated customer whose kids have gone to college already.”

Turning to the retailer’s international potential, Keledjian continued, “The customer is demanding us. They’re asking us to be in certain markets. However, there’s only so much we can handle on our own, that’s why we haven’t gone. I see the brand as international.”

After opening three stores last year, in Greenwich; New York’s Meatpacking District, its sixth store in the city, and Toronto, its first international location, Intermix plans to open about five stores this year, all in the U.S., and five to 10 next year, when it will move international again, most likely with a second Canadian location and perhaps elsewhere. For future locations in the U.S., Keledjian singled out as possibilities Philadelphia, Boston, Chicago, Washington, New York, both Northern and Southern California and Florida, most of which already have Intermix stores. In addition to Canada internationally, he suggested Europe, South America and the Middle East could be good fits.

Intermix has yet to strike partnership deals to build its retail presence abroad, but Keledjian indicated they could be close to happening. “We cannot learn every market because it could be too distracting. So [for corporate-owned retail], we have to pick the markets where we could scale in the market, where we could have multiple locations. I like Canada because I could see us having five stores in that market easily versus being in a country with one or two stores and doing all of that administrative work,” said Keledjian, who founded Intermix with his brother Haro, the company’s chief operating officer.

As Intermix looks to stretch abroad, it has sharpened its business at home. Although the size of the stores has varied little from the average of 2,300 to 2,500 square feet since Intermix started 18 years ago, what constitutes stores has changed. Intermix has begun to cultivate a localized feel. At its newest locations, including a Beverly Hills store set to open by next month, Intermix president Adrienne Lazarus said the company focused on customizing store designs to be consistent with the neighborhoods. Intermix stores cost on average $1 million to construct, excluding inventory.

When it comes to the clothes, the retailer is zealous about editing its assortment. “Intermix always has a strategy. Where most independent boutiques go out and see what is out there and cull down from that what they are really liking, Intermix goes out with a plan,” said Andrea Lenczner, who founded and designs the brand Smythe, which is available at Intermix, with Christie Smythe. Lazarus, who was a president at AnnTaylor Stores Corp. before joining Intermix about three years ago, explained, “When I came, Intermix was the best store for editing, selecting and always finding the newest. Even if it wasn’t the newest, it was the best vendor or best piece for the season. We needed to grab ahold of that.”

Intermix strongly gets behind key trends and pieces it believes suits its customers. Starting in 2009, the retailer has spotlighted them in look books that have grown from 12 to 16 pages to 20 to 24 pages filled with outfits cobbled together from various designers. Inside stores, instead of hiding key items on racks, Intermix has highlighted them on tables and mannequins, which have multiplied in the stores. “When they are passionate about something and when they really love something, they are unstoppable,” said David Neville, managing partner of Rag & Bone, “and you feel that energy when you walk into their stores.”

So as the most significant trends and pieces stand out, Intermix has rid stores of excess merchandise. The stockkeeping unit count has been trimmed 50 percent over the last four years. “Every year, we try to have a 15 to 20 percent reduction,” said Keledjian. “We’re really learning how to be even more focused, tighter, narrower and deeper.” Throughout the company, Intermix carries 225 to 250 brands at any given time, with 160 to 200 of them represented at flagships and 100 to 140 at smaller stores. Among the top brands at the moment are Rag & Bone, Smythe, Proenza Schouler, Stella McCartney, Equipment, J Brand, ALC, Iro and Yigal Azrouël. An average transaction at Intermix is $450.

While whittling down its sku count, the company has aggressively sought out exclusives, and Keledjian estimated that about 50 percent of the assortment is now exclusive merchandise. Intermix can demand exclusives because brands register sales there equal to or greater than at most department stores. “They are powerful like a department store,” said Lenczner. “An independent boutique can’t come and ask you to make five exclusives jackets. They would never put enough quantity behind them. Intermix has the volume with their stores and the new openings. They have a lot of muscle.”

Neville said Intermix differentiates itself from brand stores with exclusives (Rag & Bone has four ready-to-wear styles, three sportswear styles and several denim styles exclusive to the store this season) and the fact that at the retailer a brand “does not sit as a collection.”

Lazarus said comp sales per square foot have risen in double digits for the past two years. Keledjian said sales per square foot at Intermix’s 27 current locations run from $1,000 to $5,000, but average $1,500. Similar to other retailers, Keledjian said Intermix’s Web site accounts for 5 to 15 percent of sales. Improvements to Intermix’s online content, visual experience and back-end technology, which are expected to be fully operational within six months, should give them a boost. Keledjian wouldn’t disclose the company’s overall revenues. Industry sources pegged them in excess of $150 million annually.

In 2007, Intermix received a minority investment from New York-based private equity firm Goode Partners Inc. Since then, it hasn’t received additional outside investment. From a cash perspective, Keledjian said Intermix doesn’t need it and could actually acquire companies itself, which he suggested is being considered, but not a priority.

“However, a strategic partner that is going to help us scale as far as operations, back of the house, and international to be able to easily expand into more markets, I find that appealing,” he said. He cautioned, though, “They’ve got to understand the uniqueness of the brand. We’re very controlling.”