The Everafter children's stores and The Westside casual California chic boutique were both designed by Steve Scuro of Janson Goldstein. 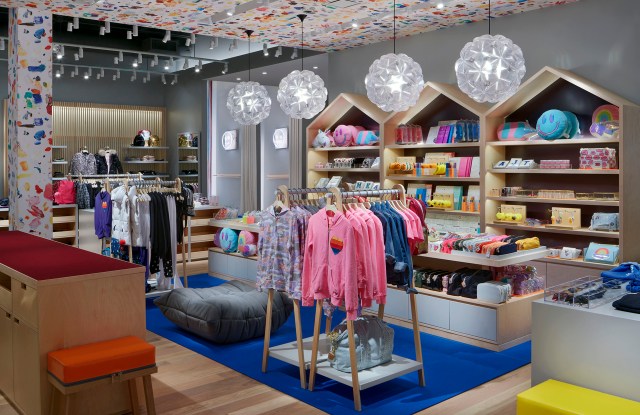 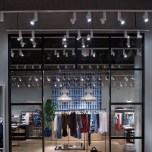 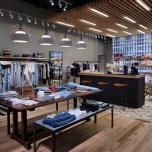 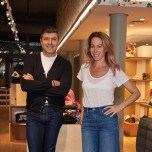 Four years after selling Intermix to Gap Inc. for $130 million, cofounder Haro Keledjian and his wife, Sari Sloane, are back at it.

They’ve quietly started two new concepts: Everafter, a children’s wear boutique, as well as The Westside, a casual California lifestyle store. Everafter unveiled its first location on Greenwich Street in TriBeCa in April and two others opened around Labor Day on the Upper East Side and in Manhasset, N.Y. The first The Westside store is next door to Everafter at Wheatley Plaza in Manhasset and also opened last month. The stores are connected by a wood and glass-frame opening.

“This is what we love and what we know how to do,” said Sloane, who had served as fashion director for Intermix.

Although she and her husband had never been in the children’s business before, they have three kids and realized there was a void in downtown Manhattan for a reasonably priced store for girls and boys age 4 to 16.

“We started this as a passion project,” she said. “There are so many families and kids and schools downtown, but there’s no place to shop. I’m a mom with three children between 4 and 9 and we’re done with the little boutiques that sell onesies. There was no one-stop shop for families.”

So she turned to Steve Scuro, a partner in the New York-based architecture and design firm Janson Goldstein, to help them create Everafter, which spans 3,500 square feet in TriBeCa. Scuro had worked with the couple — and Keledjian’s brother Khajak, Intermix’s other founder who is now in the wellness business and not involved in this project — on Intermix and has also designed Ferragamo’s Fifth Avenue flagship, large stores such as Holt Renfrew and will also create the Neiman Marcus at Hudson Yards.

“I’ve done 40 Intermix stores with them, so we’re very simpatico,” Scuro said. “What they wanted to do with Everafter was to create spaces that are integrated into neighborhoods and don’t reveal their national identity. They’re not looking for the tourist trade. At one point, it was even being discussed that each store location would have a different name. They wanted to create a place where clients would stop in on their way home. The stores were to be cool, comfortable and effortless.”

And since they’re targeted to kids, they also needed to be “fun and exciting, but at no times, juvenile,” he stressed. It’s designed to appeal to both young people shopping alone or with their parents, so there are big, comfy chairs — “they’re like adult bean bags” — and fitting rooms with striped wallpaper to encourage “socialization and hanging out,” he said.

He said retail design today has to be more thoughtful than in the past. “It used to be, stack it up and let if fly,” he said. “But nothing is flying anymore.”

Instead, he seeks to appeal to peoples’ inherent need to socialize. “They want to be out but we need to give them a reason to come in,” he said. “You can’t merchandise and tell a story online. Stores have to be exciting and invigorating and the mix constantly has to change. Retailers have to become stylists — experience and editing are the key words right now. It’s a tough environment but that means it’s time to reinvent.”

Sloane said since opening this spring, Everafter has experienced a “great response,” and gave the couple the impetus it needed to move ahead with a controlled rollout.

“We knew this wasn’t just going to be one location when we opened,” she said, adding that the infrastructure required for one store could just as easily be applied to other locations.

She admitted that running a multibrand store is “very hard to do, but if you have a formula and a niche and know what you’re doing,” success is attainable — even in this challenging retail environment. “We believe you can succeed if you have the right location, leases and product,” she said. “We’re less worried about the overall retail landscape.”

Sloane said the plan is to open one to two more stores in New York and the surrounding suburbs before branching out. “We definitely want to start opening close to home,” she said. “But we’re also looking at the West Coast. In the short term, we’d like to open 10 locations and then see where it goes. In these local pockets, we see a lot of families and a void of children’s businesses.”

E-commerce, which was launched in August, is also expected to be a “significant” business for the brand.

“We’re going to grow this organically,” she added. “It’s enjoyable and a lot of ex-Intermix employees work for us.”

She said the “pace” of the children’s market is “less intense” than that of women’s, which was the specialty of Intermix, which the Keledjian brothers founded in 1993. But a lot of the names are still well-known. Top brands at Everafter include Stella McCartney, Chloé, Kenzo, Scotch & Soda, Little Marc Jacobs, Aviator Nation and Spiritual Gangster.

The second concept, The Westside, is a “California-inspired” store that Sloane described as “laid-back luxe,” influenced by Santa Monica or Malibu beaches. The idea is that women can “dress in style but in a casual way.” The store will also carry some men’s wear.

“The women’s market is saturated, but it’s hard to shop for casual clothes, which is one of my passions,” she said. “That’s our angle — cozy, comfortable, easy clothes.”

“Where Everafter is playful and pop,” she said, “The Westside is more residential. You feel like you’re in somebody’s home in Malibu. There’s a cool vibe and feel.”

Sloane said they’d like to open a Westside store in New York and will also look on the West Coast for the right locations. “It’s something I’m very passionate about, but there’s a lot of competition, so we’ll be thoughtful on that expansion,” she said.

So why would Sloane and Keledjian decide to go back into the retail business? “Some things just happen at the right time,” she said. “Before we sold Intermix and the two years prior, we’d just gotten really big. What’s nice about this is that we’re starting very organically and the way of working is different. We’re constantly searching to be the best, but we also want more family time.”