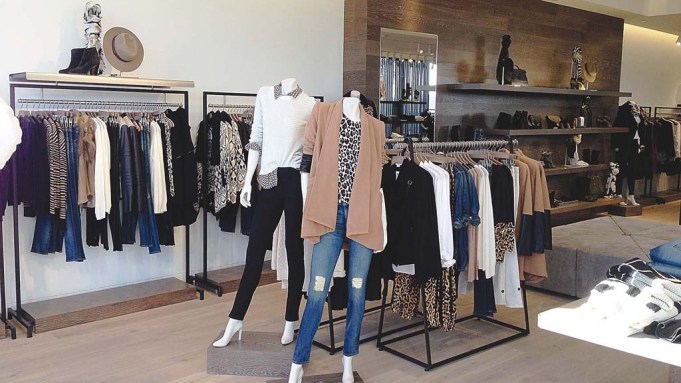 NEW YORK — Since its acquisition by Gap Inc. in January, Intermix hasn’t wantonly expanded or transformed into a collection of lower-priced brands, as some retail experts predicted. In fact, the opposite has happened. Intermix is strengthening its designer and luxury assortments, expanding units and upgrading store design using high-end materials and furniture and the inclusion of original art. It’s also giving stores a more localized focus, working on a men’s collection and preparing for international expansion.

Gap’s infrastructure and support, including back-office functions, have allowed Intermix to focus more on its assortments while improving its physical stores, Keledjian said. “We’re elevating all of the stores,” he added. “It’s not a quantity game. It’s a quality game.”

Intermix operates 38 stores and an e-commerce site. Keledjian declined to reveal the company’s volume but, as an example, cited the SoHo unit, which does over $5,000 a square foot in sales. He stressed that not all stores do such high volume.

Stores in secondary markets have turned out to be surprisingly productive for Intermix. “We didn’t know Marin County [Calif.] or Greenwich, Conn. would be as successful as they are,” said Keledjian. “That opens a whole horizon. In Bellevue, Wash., the customer reception inspired us to look at similar markets. We’re sitting in a great void between department stores and mom-and-pop stores. We’re expanding into secondary, more suburban cities.”

Intermix is utilizing the muscle of the $16 billion Gap’s real estate team, Keledjian said. The brand opened six stores this year, including Montecito and Marin County, Calif. In 2014, Intermix will unveil between five and 10 new units.

“There are many markets we’re not in yet. You can squeeze a lot of juice from the lemon you have on hand,” he added, referring to existing units. “We have to be outperforming because our margins are difficult. We’re competing with vertical retailers.”

Intermix is updating its stores with a sophisticated palette of finishes and furnishings. Stores on Madison Avenue, Fifth Avenue and SoHo, here; Rush Street in Chicago; Robertson Boulevard in Los Angeles, and Manhasset, N.Y., are scheduled for facelifts.

The retailer recently opened stores in Brooklyn, Boston and Seattle. A 2,300-square-foot flagship on Smith Street in the Carroll Gardens section of Brooklyn that recently opened preserves elements of the building’s original design, including an exposed brick wall and wood beams on the ceiling. The store also reflects the new elevated prototype with blackened steel fixtures, distressed leather tabletops and original art wallpaper from Brooklyn’s Calico Wallpaper.

“As some companies get bigger, they get more cautious,” he said, explaining that Intermix has remained true to its edgy self, citing a mural on a wall of the Malibu, Calif., store. “The store felt white, so instead of wallpaper, I said, ‘How about getting an artist to paint palm trees.’ You have to touch the customer’s heart with product that’s well edited and local. Madison Avenue is different than Malibu. and Malibu is different than SoHo.”

“Gap has allowed us to stay entrepreneurial,” said Keledjian, who reports to Art Peck, president of Gap Inc.’s Growth, Innovation and Digital division.

“They are very strategic thinkers. Parts of the business have complete autonomy. They [Gap] are where we need them to be. We have our long-range plans in place and we have to deliver.”

Those plans include the Internet. “The Web is one of our biggest doors, comparable to Fifth Avenue or Madison Avenue,” Keledjian said. “We’re using it to find the next location.”

That applies to international stores, too. “We’re going to follow international customers to Europe, South America, the Middle East and Asia,” he said, noting that Intermix ships to 100 countries worldwide. “There’s an international sensibility to the brand. It’s adaptable [overseas]. We proved that going into Toronto,” where Intermix opened a flagship in 2011.

With so many brands and limited space in each store, Intermix is expanding select categories judiciously and editing out others. “We’d like to expand accessories, handbags, footwear and sunglasses,” Keledjian said. “The [handbag] industry has been highly dominated by luxe brands [such as Gucci and Louis Vuitton]. We’re launching A.L.C. handbags. I see the success of Rag & Bone boots. It’s designer contemporary.”

Keledjian has no interest in collaborating with designers for the sake of a hookup. Nor does he have patience for gratuitous private-label products. “Private label is a void in the marketplace,” he said. “It has to be great product that is complementary to the mix. We won’t be competing with our vendors for the sake of higher margins.”

Building on its heritage, Intermix is developing a culture of personal stylists, Keledjian said, referring to the training sales associates receive that teaches them to put complete outfits together for shoppers. “We have 200 brands in an average of 2,500 square feet,” he said. “You have to be curated and edited at the local market level. That’s what we’re perfecting. I don’t think we’re there yet.”

Intermix is introducing 60 new brands this year and reducing or eliminating close to 40 brands.

“We’re very nimble,” Keledjian said. “Some designers are one-hit wonders. We want to be the first in and the first out of a line.”