International Brands Are Investing in London, Despite Brexit Questions

Fusalp, Forte Forte, Snow Peak and Mackage are all debuting new store concepts in the British capital this month.

By Natalie Theodosi
with contributions from Samantha Conti
on October 22, 2019

Inside the new Forte Forte store in London.

LONDON — There are only nine days left until the Brexit deadline of Oct. 31, and after the latest defeat in Parliament Tuesday for Prime Minister Boris Johnson’s plan, the way ahead remains unclear – as does what the real impact on the retail and fashion industries would be.

Despite all the question marks, luxury retail seems to be on an upward trajectory in the British capital, with a flurry of openings from international brands.

Italian contemporary label Forte Forte opened its first freestanding store in London, in South Kensington, while across the street the French skiwear brand Fusalp has also just set up shop. In St James’s, an area that has undergone major redevelopment by the Crown Estate, the Japanese outdoor brand Snow Peak is opening its first European flagship, while Canadian brand Mackage has chosen Sloane Street to debut a pop-up store, its first retail foray in Europe.

These brands say they trust the potential of the London market, given the international clientele it draws and the growing success they’ve been seeing at wholesale to date.

“The U.K. is our second-largest market in the world and we’ve been offered a premium spot on Draycott Avenue that is well positioned to cater to a British and international clientele and an attractive location for our existing customers, including the French expat community,” said Alexandre Fauvet, Fusalp’s chief executive officer.

The new Fusalp space is located next to brands such as Joseph, Chanel and Chloé and right across from the private members’ health club KX, which creates high footfall on the street and which the brand says will help it target the right type of fitness and luxury-loving locals.

In addition to the store opening, the brand is further investing in strengthening its presence in the U.K. with a pop-up at Selfridges that’s set to open by the end of the month, and an exclusive capsule designed for Net-a-porter. 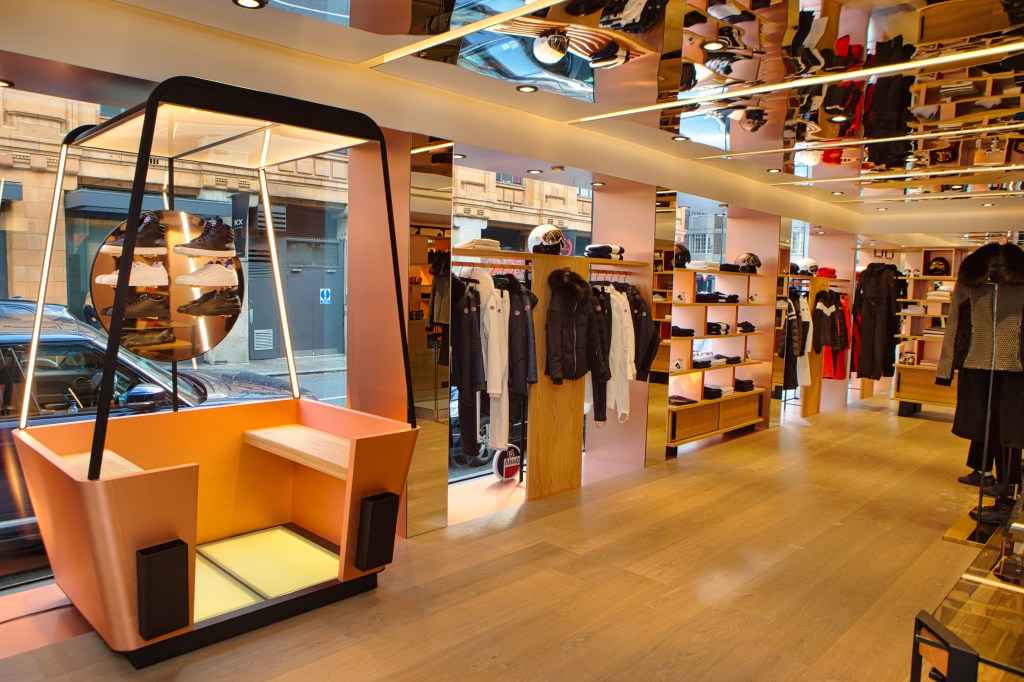 Inside the new Fusalp store in London.  Courtesy Photo

“Our wholesale presence in London is increasing: Selfridges is a newcomer and we already have a brand presence in Harrods, Matchesfashion.com and Net-a-porter. But a large proportion of our clientele enjoys the brick-and-mortar experience. The technicality of our products is something we take very seriously, so having a store is just the extra mile we want to go for,” said Fauvet, adding that more stores in London, as well as other key U.K. cities, such as Manchester, are in the works.

Having a physical store will offer the brand the opportunity to offer a broader assortment beyond its popular skiwear, according to Fauvet. He added that the classic, technical nature of the product means that demand can be sustained even if Brexit causes a temporary strain on retail.

“Brexit is a phenomenon that will certainly put a strain on retail activities for many brands, and we, of course, hope not to suffer too much from it. We strongly believe that this first London flagship is essential for our international development,” he said.

Snow Peak, which specializes in camping equipment, gear and clothing, also said that it’s been seeing continued interest from U.K. customers and chose to establish a presence in the St. James’s area, which is filled with specialty stores ranging from Paul & Shark to Dover Street Market.

“This is not only a retail store, but just as much a venue for workshops, talks, events, or company meetings. After opening the store in London, our next project will be setting up our own campsite where we can engage with our customers. The activity part, and meeting customers is in our backbone and just as important as the retail part of our business,” said Gunnar Björling, Snow Peak’s general manager of the new space, which spans 4,300 square feet and three floors. 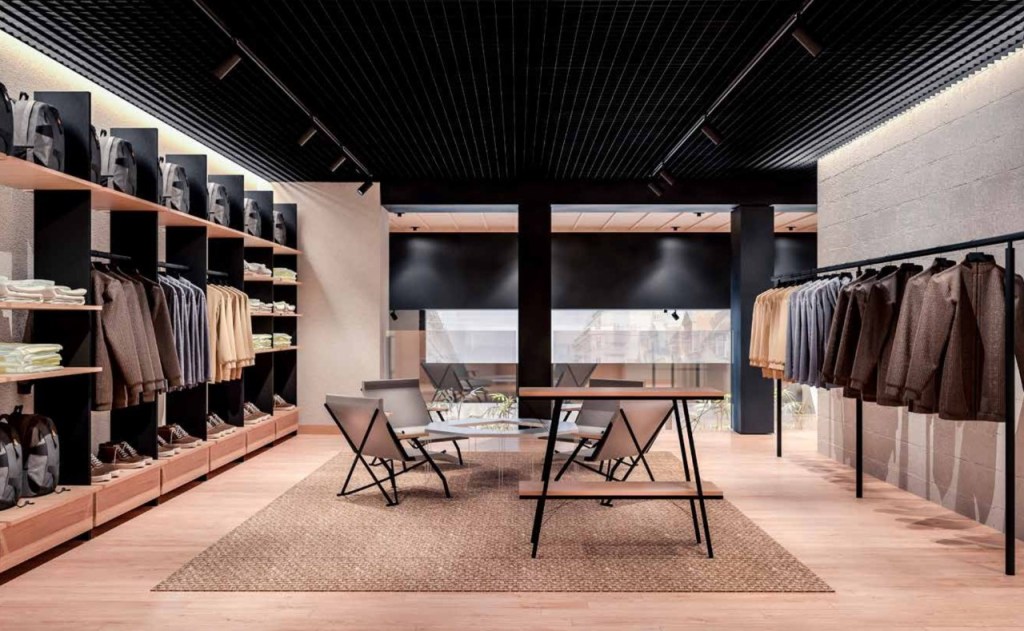 Inside the new Snow Peak store in London.  Courtesy Photo

An e-commerce site catering to British customers launched at the same time as the store opening.

Another label specializing in the great outdoors, Canada-based Mackage, is entering the European market with a pop-up store on Sloane Street, which is set to stay open for a six-month period. The Canadian brand has garnered a lot of media attention as of late, with the likes of Gigi Hadid, Hailey Baldwin and Britain’s new favorite style icon Meghan Markle, the Duchess of Sussex, spotted in its outerwear. It’s now looking to turn the buzz into a more solid retail business.

“Opening our first European store in the city of London is the perfect initial step to establish our retail network in Europe,” said Eran Elfassy and Elisa Dahan, the brand’s co-creative directors, pointing to the store’s design, which has a product-first approach, as a nod toward the “global store concept” the brand is working toward. 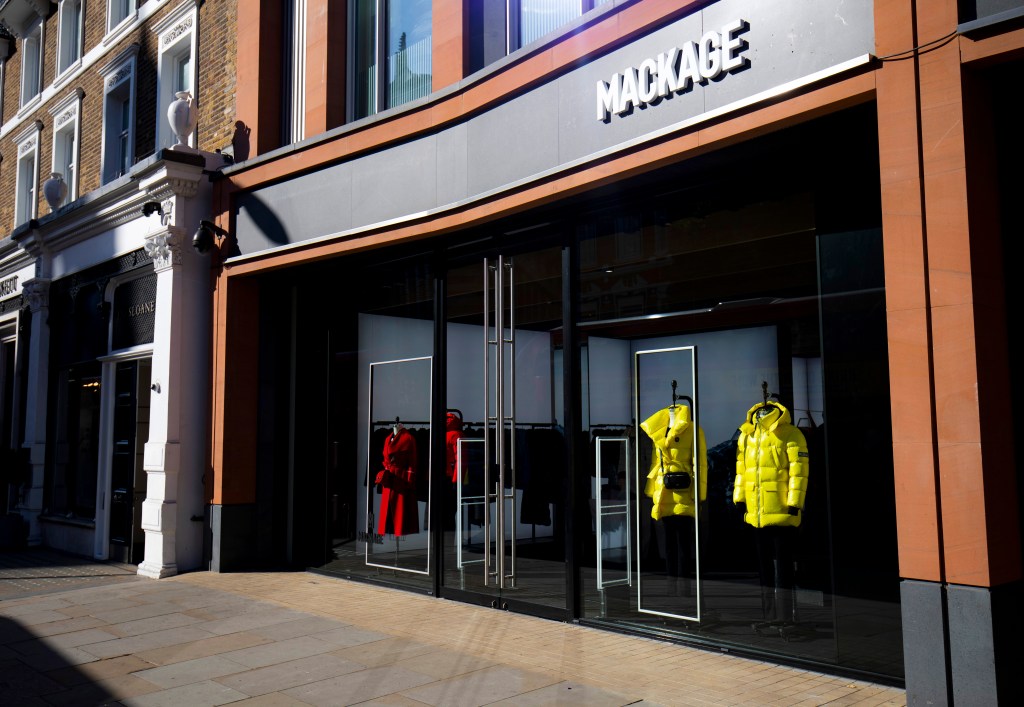 Another brand bullish on the U.K. is Forte Forte, which has opened at 108 Draycott Avenue, not far from Golden Goose, Chanel, Joseph and Stella McCartney. The London store is part of a larger rollout, which began in Milan and Paris and will continue in New York, Madrid and Rome in 2020.

Roberta Benaglia, chief executive officer and founding partner of Style Capital, Forte Forte’s parent company, said the company sees the new London store as a launch pad into the U.S., as the customer in both markets is a similar one.

Forte Forte already has a thriving business at nearby Harvey Nichols, so the principals thought it would be a logical next step to open a stand-alone store and build more brand awareness.

The new unit spans 1,728 square feet (about the size of the Milan store) and has sunlit interiors with touches of the natural world everywhere, from the Japanese maple tree to the terra-cotta floors and the paintings of the sea.

Asked about the risks of Britain leaving the European Union, and whether this was the right moment to open a store in London, Benaglia said she was thinking more about the brand’s robust sell-throughs at Harvey Nichols, and the long-term more than Brexit itself.

“It’s important for us to have a store in London: In the long term — in five years’ time — London has the chance to be a new Switzerland. Also, the uncertainty has frightened some, but it has given us the opportunity to strike, and to get a great deal on a key location,” the ceo said.

She said the soft opening earlier this month was a success and the store was already hitting its sales targets.