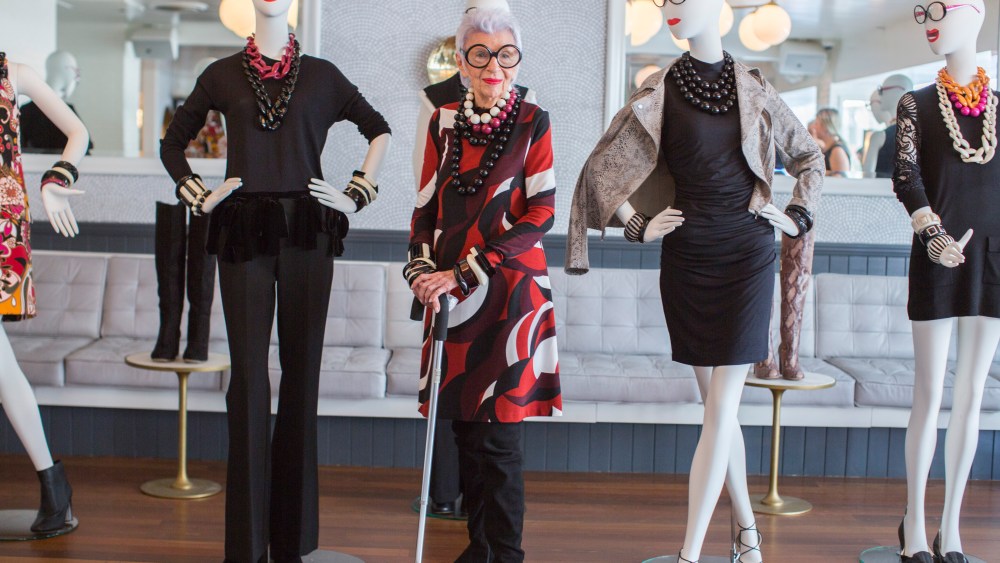 NEW YORK — “Everything is so lovely — oh definitely,” exclaimed Iris Apfel, at her 95th birthday party thrown Italian-style by Macy’s at Mario Batali’s La Sirena restaurant in Chelsea on Tuesday.

Apfel was dressed in a lightweight swing ponte dress and a stack of big necklaces from INC International Concepts, the Macy’s private label that she guest edited for fall. “I feel naked when I don’t have them on my neck,” Apfel said. “They’re resin and they are ridiculously priced. If you spent $1,000 on this collection, you would look like a million.” When one guest asked if there was a trick to stacking jewelry, Apfel replied, “You just do it and if doesn’t work for you, you change it.”

Macy’s teamed with Apfel to launch a collection within the INC line called Iris Meets INC. It’s 40 “must-have” pieces capturing the spirit of Sixties Mod styles, which Apfel embodies. According to Tim Reid, Macy’s group vice president of marketing strategy, Apfel-INC products have just begun to trickle into the stores. “It will be in full force next week. The amazing prints and the layers and layers of jewelry are really the standouts,” he said.

Monday was actually Apfel’s birthday, but that milestone doesn’t seem to be slowing down her daily pace. The designer has collaborated with Happy Socks to create a series of women’s and men’s socks, and a few styles of men’s briefs hitting stores Sept. 12. She is the headliner for the company’s 2016 Local Hero project, which recruits a creative spirit to help spread happiness. The unmistakable New Yorker will also appear in the brand’s fall ads, wearing her signature owl-like glasses, multiple bangles, necklaces and scarves. Appel is pictured by lensman Bill Gentle in her Palm Beach home amidst assorted collectibles and art books. Her vibrant, printed socks and underwear will be sold on Happy Socks’ site, and in its concept stores and select retailers.

Asked if she had another retail project outside of Macy’s coming up, Apfel replied, “There is no other Macy’s. This is it.” But she did mention she’ll be attending the Naeem Khan fashion show and doing a shoot with Tag Heuer Monza.

Apfel started her own textile company, Old World Weavers, in 1950 with her late husband, Carl. Aside from having a hand in nine restoration projects at the White House during her multi-decade career, she has racked up her share of campaigns in recent years including Kate Spade, MAC Cosmetics, Alexis Bittar, HSN and Le Bon Marché.