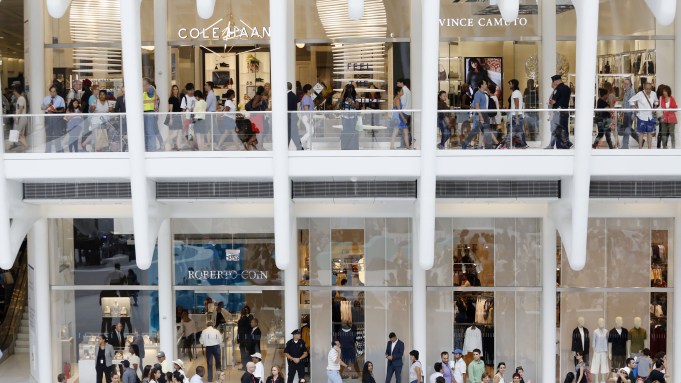 Is the drought over, or is it just another case of wishful thinking?

A rare burst of enthusiasm over apparel emerged this month in a string of second-quarter reports from retailers. Some were downright elated. “I believe the change is now upon us. Our customers are adapting to new looks and silhouettes as we speak,” crowed Richard Hayne, Urban Outfitters’ chief executive officer. “The fact is, there’s an abundance of exciting fashion happening.”

Even Macy’s chairman and ceo Terry J. Lundgren told WWD that there was a sales lift in apparel amid an overall 3.9 percent decline in revenues in the second quarter. He cited denim, juniors, dresses and athletic apparel as standouts.

Target’s comp-store sales dropped 1.1 percent though the women’s apparel business saw a mid-single-digit comp increase driven by in-house brands such as Xhilaration and Who What Wear. Wal-Mart fared better than Target, with a 1.6 percent comparable-store sales gain and strong performances by children’s and ladies basics.

Yet for every retailer touting an apparel rebound, or at least seeing some consistency in the selling, there’s another that says, “play it cool, boy.”

“I don’t think anything has happened to give us a firm indicator,” said Pete Nordstrom, copresident of Nordstrom Inc., when asked if apparel has turned a corner. “It’s appropriate for us to still be cautious and to balance conservative inventory levels with making sure buyers are buying new things. When we get new deliveries of exciting products, it works really well.”

“The only time you see the ready-to-wear business really percolate is when there is a major change of silhouette,” said Stephanie Solomon, fashion director at Lord & Taylor. “The last big news in ready-to-wear,” she added with an air of concern, “was colored jeans four or five years ago.”

“There is a lot of cost-cutting. Shopping center traffic numbers are really down. Stores are still talking about negative comps, except for Urban Outfitters,” said one retail ceo. “People are beating expectations but nobody is beating last year. The stock goes up. Why? It’s this false hope that the consumer is back. Even if our business had a good week or two, there is no reason to get optimistic right now.”

“In apparel, specifically, the environment remains challenging,” said Gap Inc. ceo Art Peck, in a conference call with Wall Street analysts. “And quite frankly, it remains most challenging in the higher end of the market,” targeted by retailers like Neiman Marcus and Saks Fifth Avenue and not Gap Inc.

For the past three to four years, the performance in women’s apparel has been afflicted by a confluence of factors — lack of innovation, oversupply, markdowns, deflation, declining mall traffic, and consumers spending more on electronics, restaurants, spa, travel and experiential entertainment. There are also too many stores, though retailers are trimming their fleets, and the rise of fast fashion, fashion web sites, outlets and off-pricers has grabbed market share from traditional department stores and specialty chains.

It takes a couple of seasons of solid gains to say with certainty that a turnaround has arrived, though this month’s chorus of optimism can’t be ignored. Within the universe of fashion, retailers are talking up denim the most, where there has been innovation, specifically softer hand, distressed, cuffed, released hems, anything that shows ankle, and colored denim in burgundy, blush, black and gray. Denim that’s more basic or considered core replenishment product is not selling that well.
Merchants cite men’s wear as outperforming women’s, driven by the application of activewear characteristics, such as stretch, flex, wicking and waistband treatments, to casual bottoms. Dockers, Wrangler and Under Armour are among the brands benefiting. Similarly at Gap, Old Navy and Banana Republic, there’s “a compelling” stretch offering, Peck said. “That’s a direct lift from the active space and we’re not stopping at denim. We see significant opportunity for accelerating technical innovation in ready-to-wear, whether it’s stain repellent, stretch, moisture managing, et cetera.”

In women’s rtw, there are pockets of strength spurred by retro Nineties styles, throwback streetwear and ath-leisure, i.e. Juicy Couture and Adidas. Fashion that is seasonless or transitional; off-the-shoulder and cold shoulder styles; pattern mixing; body suits; bralettes; panties with pronounced, logoed waistbands including intimates from Calvin Klein and Victoria’s Secret, are selling. So are bomber jackets and cotton anoraks, suggesting a shift away from cardigans.

Ath-leisure is still a healthy category, yet some retailers feel the category has plateaued. Nineties-style side-stripe pants with track jackets, are popular, and Lululemon has made a comeback after some product difficulties. The dress cycle has simmered, though special occasion dresses that are fluid, less body-conscious, and those with lace and crochet are selling, retailers said.

Footwear has been tough with exceptions being booties, open-toes, cutouts and chunky heels. Sandal sales picked up with the warmer weather; athletic footwear, slip-ons and white sneakers are trending including Stan Smith leather models from Adidas. Style changes in bottoms encourage women to update their footwear. A key look: booties with cropped, ankle-revealing denim pants.

Off-pricers such as TJX Cos., Ross Stores and Burlington Coat Factory, as well as Urban Outfitters, Dick’s Sporting Goods, Foot Locker and American Eagle Outfitters, have been standouts, while Hollister has also been improving.

Luxury stores such as Neiman Marcus and Saks Fifth Avenue, as well as most teen and missy specialty chains and midtier department stores continue to be challenged for business, including Aéropostale, Abercrombie & Fitch, American Apparel, Sears and Macy’s.

In the luxury arena, it’s tough to get a read on privately held Barneys New York, but the company said designer rtw brands that are selling well include The Row, Valentino, Unravel, Ambush, Nili Lotan and Yohji Yamamoto. “It’s driven by transitional buy-now-wear-now styles as well as emotional, must-have pieces such as fur and shearling, velvet, and novel item jackets and dresses,” said Jennifer Sunwoo, executive vice president and general merchandise manager of women’s. “In our developing space, customers are also responding to casual but edgy street looks, vintage, salvaged field jackets and denim, and graphic Ts. Highlights are NSF, Icons, Off-White and R13.”

At Neiman Marcus, “Transitional trends that speak to seasonless dressing continue to be the focus,” said Ken Downing, senior vice president and fashion director. Customers are also responding to what’s “unique and  emotional,” Downing said, citing embellished, decorated and adorned handbags, shoes and rtw that speak to the Ziggy Stardust, glam rock opulent irreverence of the season. “In the same theme of stage-worthy style, bold gold and shiny metallics are an important addition to a customer’s closet giving immediate fashion credit to her wardrobe.” And then there’s “velvet, velvet and more velvet. Velvet shoes and booties have been a popular trend.”