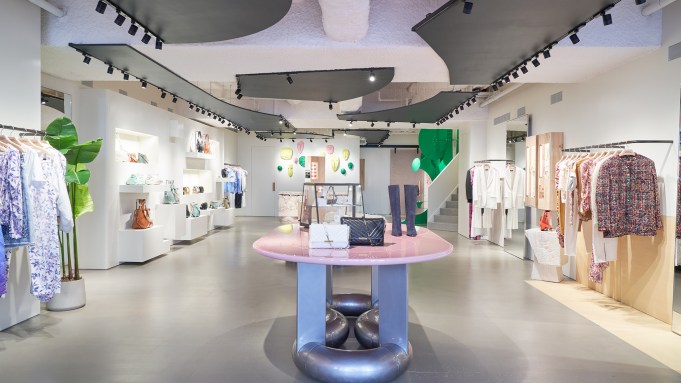 NEW YORK — Isabel Marant has opened a new flagship at 677 Madison Avenue, the biggest store in the company’s fleet.

The 2,950-square-foot store replaces an uptown store at 23 East 67th Street and joins another New York boutique at 469 Broome Street in SoHo, which Marant has had for 12 years.

Known for her bohemian nonchalant style, Marant opened her first store in Paris in 1998 and today has 66 stores globally, 10 percent of which are franchises. There are eight stores in the U.S.

The new two-level store carries women’s ready-to-wear, bags, shoes, accessories, jewelry and sunglasses, as well as menswear, which was introduced four years ago. Some 20 percent of the new store will be dedicated to menswear. Pre-fall is in stores, and the fall collection will be arriving shortly.

Designed by Marant and an in-house architecture studio, the store’s main floor showcases Isabel Marant mainline, accessories — bags, jewelry, sunglasses and some shoes — while one flight up is the shoe section, Isabel Marant Etoile, a women’s secondary line, and Isabel Marant Homme.

“There’s more space dedicated to each category,” said Anouck Duranteau-Loeper, deputy chief executive officer who, along with Marant, was interviewed on Zoom earlier this week.

Asked who she’s catering to in her new boutique, Marant said the customer range is quite wide. When she visited one of her New York shops recently, she said she was surprised to see mothers and daughters and mothers and sons shopping together “and they’re all attracted to different things.” She said she caters to her own generation who grew up with the French label the last 30 years, as well as the new generation. “They don’t wear the collection the same way,” said Marant, who founded the company in 1994 and is credited with inventing the bohemian Parisienne hipster-meets-tomboy look.

Marant anticipates that the prints will be bestsellers, along with key embroidered pieces in the ready-to-wear.

Duranteau-Loeper said two thirds of Marant’s business is rtw and the dresses do very well, along with outdoor pieces such as coats, jackets and overcoats. “Bags and shoes are also performing quite well,” she said.

“And the boots, of course,” added Marant.

Expanding its retail footprint in the U.S. is a key initiative. At present, Marant has two stores each in New York, Los Angeles and Miami, and one store each in Dallas and San Francisco. There are openings planned for Chicago, Atlanta and Houston. The company doesn’t have a presence in the Hamptons but is looking at pop-ups for the summer. Marant has more than 800 points of sale globally.

As far as the Madison Avenue store’s decor, the building’s facade is decorated with engraved concrete panels and has two large display windows. The store was the former home of Berluti. Inside is a concrete floor, adding a mineral touch, which is dotted with natural stones and terracotta tiles.

Marant and her team worked with a group of local young designers and artisans. On the ground floor, the women’s collection is displayed on artisanal podiums and hangers. Artist Arnold Goron designed the space’s centerpiece, a bright pink table showcasing this season’s key accessories, as well as a colored metal sculpture located at the foot of the stairs.

Inspired by the concept of “cabinet de curiosities,” a common thread in all Marant stores, the furniture is a mix of statement pieces: a fluffy Berber sofa sits next to fiber porcelain display units, hand-carved wooden shelves and floor-to-ceiling mirrors.

While primarily pared-back and minimalist, the space is decorated with touches of color: green, pink and yellow accents adorn the mural installations, mixing unusual sculptures and travel souvenirs, while the shoe section features a vibrant yellow shelving unit.

She said the company is not looking for new investors right now because the climate is not right, but she said perhaps they might when the market is quieter and more stable. As reported, according to WWD sources, J.P. Morgan has been tasked with selling Montefiore Investment’s 51 percent stake in the brand, which it bought in 2015.

Duranteau-Loeper noted that the U.S. is a big focus for the company, representing more than 20 percent of the overall business, as well as Asia. Its largest market is Europe.