As it continues to shift its focus to include not only traditional department stores but also small- and medium-sized concept shops, Isetan Mitsukoshi Holdings is opening a new multibrand boutique in Tokyo’s Roppongi district. 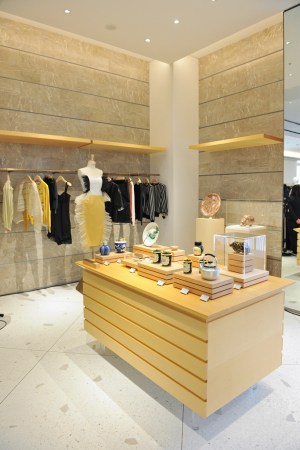 TOKYO — As it continues to shift its focus to include not only traditional department stores but also small- and medium-sized concept shops, Isetan Mitsukoshi Holdings is opening a new multibrand boutique in Tokyo’s Roppongi district.

The store, called Isetan Salone, is set to open Friday at the Tokyo Midtown luxury mixed-use complex and is about 9,700 square feet of selling space on two levels. It will stock a selection of women’s fashion, accessories, beauty products, jewelry and gift items from about 90 brands. Hiroshi Onishi, president and chief executive officer of Isetan Mitsukoshi Holdings, said while, product-wise, the store is almost like a mini version of one of its large-format department stores, the company hopes to use it to attract new customers.

“There actually aren’t that many people from this area who go to our Shinjuku store,” Onishi said. “So this time we wanted to create a store where people from around here who like fashion can come to find things that fit into all aspects of their lifestyle.”

The Roppongi neighborhood was seen as mostly an entertainment district until just over a decade ago, when the Roppongi Hills complex opened, bringing the area its first luxury shopping destination. Tokyo Midtown followed a few years later, and the area is now known not only as a retail center, but also as a business and cultural hub. It is home to many wealthy residents, from business people and diplomats to artists and creative types.

The interior of Isetan Salone was designed by well-known photographer and architect Hiroshi Sugimoto. It was his first retail project, which he said was challenging because the standards and requirements are so exacting. Sugimoto used mainly traditional Japanese materials, but applied them in unexpected, modernized ways. The wall behind the staircase, for example, is covered in overlapping round pieces of galvanized tin, which was used on the exterior of buildings at the beginning of the 20th century due to its fireproof properties. Another wall is covered in hammered aluminum, which was traditionally used to make Japanese kettles. Other elements include Japanese rice paper; natural, unfinished Japanese cedar, and tiles baked specially by a centuries-old workshop that normally fills orders from Buddhist temples.

The product selection at the store is eclectic but luxury focused. Sportswear by Adidas Originals hangs near clothing by Carven and Sacai. There are shoes by Valentino, handbags by Fendi, casual tops by No. 21, perfumes by L’Artisan Parfumeur and Penhaligon’s, cosmetics by Nars, and jewelry by Franck Muller and Georg Jensen.

Onishi said he hopes to open more of these smaller-format, fashion-oriented boutiques, ranging in size from roughly 10,000 to 50,000 square feet. One such store is being planned for the central Japanese city of Nagoya, with a targeted opening of next spring. At about 32,000 square feet, Onishi said the store is large enough to include not only fashion and beauty products, but also interior and lifestyle goods. He added if the company finds the right locations, it could open up to 10 of these kinds of stores over the next three years.

The opening of Isetan Salone coincides with a handful of other store openings within the Tokyo Midtown complex, including Aesop, Tasaki and Bamford.