While Black Friday is firmly entrenched in the Thanksgiving holiday as much as turkey and pumpkin pie, the term would lead to blank stares in other parts of the world until a few years ago.

That has changed thanks to a big marketing push from global brands and many international consumers took the bait this year, taking to their smartphones, tablets and laptops to shop the sales from Thanksgiving Day through to Cyber Monday despite not having Thursday and Friday off work like many Americans.

Outside of the U.S., the busiest international shoppers were those based in the U.K., with online revenues up 71 percent from a year earlier, according to eShopWorld, a cross-border commerce company that works with many major brands.

In the U.K., over the five-day period, year-over-year sales growth was strongest on Thanksgiving Day at 82 percent and lowest (although still extremely robust at 65 percent) on Cyber Monday.

The U.K. was followed by Canada and Australia, where online revenues were up 23 percent and 114 percent, respectively. Germany was in fourth place, while the Russian Federation was in fifth place.

“The Black Friday-Cyber Monday shopping phenomenon has caught hold in markets well beyond the U.S. and the extended weekend is now a key retail period in many regions across the globe,” said Cynthia Hollen, eShopWorld’s U.S. president. “Many of the regions that we work closely with saw record-breaking e-commerce sales growth over the long holiday shopping weekend this year, particularly on Black Friday.”

This followed figures out earlier this week from tech firm Adobe Analytics, which showed that Americans spent a combined 11,000 years shopping online Monday — shelling out a record $7.9 billion. 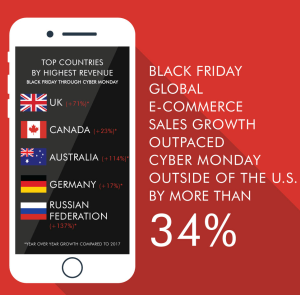