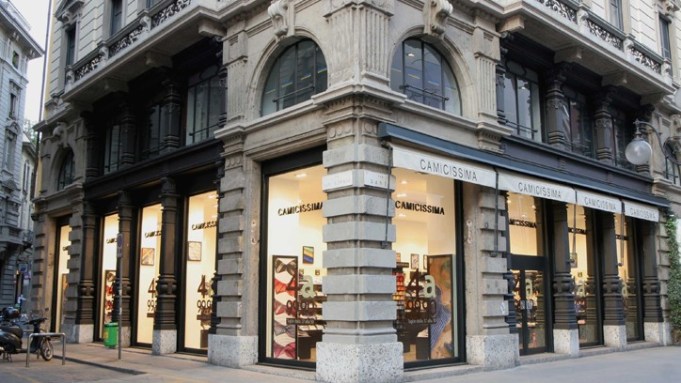 Camicissima, an Italian shirtmaker with 100 stores in Italy, is heading to the U.S.

The privately held company, which was founded in Palermo, Italy, in 1931, has signed a 10-year lease for a New York unit at 509 Madison Avenue on the southeast corner of 53rd Street. The 1,677-square-foot, two-level store is slated to open on Black Friday, according to Fabio Candido, president and grandson of the founder, who owns the business with his brother Sergio. The ultimate goal in the U.S., Candido said, is to “surpass the number of Italian stores.”

Calling itself the Zara of the men’s shirt business, Camicissima has found fame in Italy for its sharp pricing. It sells four shirts for 99 euros, or $146.72 at current exchange. In the States, it will sell four shirts for $99.90, and three ties for $39.90. The company’s overall volume is $45.5 million.

Although its Italian stores only sell shirts in bulk, Candido said that in the U.S. market, Camicissima will sell one shirt for $49.90. Ties, however, will still only be offered as a bundle.

The store will carry only dress shirts in a variety of solids and patterns. In fact, every month, 300 to 400 styles of shirts will be delivered to refresh the company’s offering. All are 100 percent cotton, designed in Italy and manufactured in China. Ties are 100 percent silk.

In Italy, the company carries both traditional and slim-fit models, but in the U.S., only a traditional silhouette will be offered, the company said. That may change, however, once the store is established. “We will see what sells and then refine the concept,” said Liberio Romano, managing director of Camicissima’s U.S. operation.

Candido, who expects the store to have sales of $1.5 million in its first year, said the company is also testing a casual line in Italy that offers vintage, washed looks, but that collection is not slated to be carried in the U.S. unit.

The Madison Avenue store is the first of many Camicissima hopes to operate in the States.

“We’re looking at suburban, downtown and mall locations as well as outlets,” said Romano.The company is working with Alex Cohen, senior director of Cushman & Wakefield, on its U.S. rollout.

Cohen said the company’s choice of 509 Madison fulfills its quest for a site “with excellent visibility. With its double-height glass and corner site, 509 Madison was an ideal location for Camicissima to launch its U.S. presence.”

Despite its focus on the U.S., Camicissima is not turning its back on Italy and expects to grow to 160 stores there over the next two years. It is also seeking to expand in Spain, Greece and Poland, Candido said.

“We thought it would be two years before we came to the U.S., but the rents are down and we saw the opportunity to come into an expensive market,” Romano said.