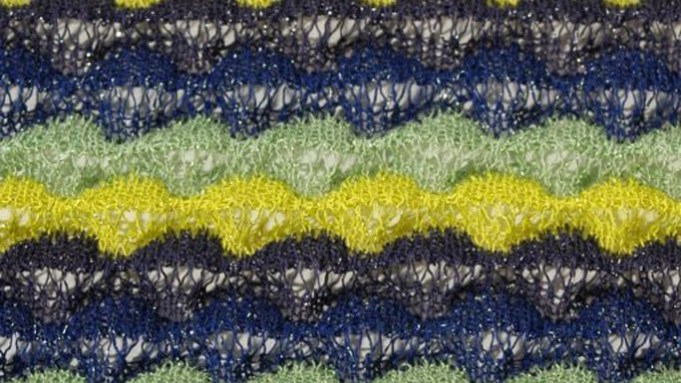 MILAN — Yarn makers showcasing their spring 2015 collections at the three-day Pitti Filati fair that ended Jan. 24 forecast an economic turnaround this year thanks to an improved domestic outlook.

Experts said Italy will likely show moderate economic growth during the last quarter of last year and this year seems to be off to a good start economically. Yarn firms felt the industry will follow the trend and perform well in the first half of this year.

“There has been a change in the mood,” said Raffaello Napoleone, chief executive officer of organizer Pitti Immagine. “After two years of low domestic consumption, we presume that 2014 will be better than 2013.”

Data compiled by Istat and fashion lobby Sistema Moda Italia showed that the Italian yarn industry posted a 2.1 percent drop in revenues and a 1.8 percent decline in exports in 2013, yet the rate of decline has slowed significantly compared with 2012, when the industry saw revenues fall 7.8 percent and exports decrease 6.8 percent.

“Unlike recent years, we are starting 2014 with the idea that things are more or less stable. There are no signs of danger or unexpected surprises,” said Zegna Baruffa Lane Borgosesia ceo Paolo Todisco, noting that the company is offsetting potential rises in raw material prices by purchasing cashmere and wool in U.S. dollars, which has weakened over the past year against the euro.

Leading Italian cashmere maker Cariaggi said its sales grew 36 percent in France, 30 percent in the U.K., 29 percent in Germany and 17 percent in China in 2013.

“We are especially satisfied with our growth abroad, which this year accounted for 38 percent of turnover, because our clients around the world recognize our talent for delivering the properties of a fiber…and the craftsmanship, creativity and quality that are typical of our country, in one package,” said Piergiorgio Cariaggi, ceo of Cariaggi Fine Yarns Collection.

Cariaggi said the company will be investing 2.5 million euros, or $3.4 million at current exchange, in research and development this year.

Botto Giuseppe and Lineapiù said they will also make investments this year of about 2 million euros, or $2.7 million at current exchange, and $1 million each in machines and innovation.

Lineapiù will buy machines that are specialized in dyeing viscose due to a 30 percent rise in requests for the material, which is made from regenerated wood cellulose.

The Pitti Filati fair, which ended Jan. 24, hosted 102 brands, versus 100 at last year’s edition. Some 18 of those were from abroad, including the U.K., Japan, Turkey, China, Germany and Romania.

The trend spotlight was focused on sophisticated and sustainable yarns. Airy yarns incorporated with vegetable fibers, mélange and knits with moiré-type streaks and macramé looks were prominent. Loro Piana implemented new coloring techniques to infuse silks with a light and luminous aspect, while linen took on more worn and sporty looks.

Cariaggi emphasized the natural qualities of wool and cashmere fibers by expanding its range of natural white and gray without using whiteners or dyes.

Alpes Manifattura Filati showcased yarns that took cues from the ancient ruins and sculptures of the Middle East, North Africa and Europe. Terra-cotta and cold blues and aged pinks dominated the palette.

“The trend is moving toward a more sandy, natural, dry touch,” said Valeria Bigolin of Alpes’ research and development department.

Despite concerns over rising wool prices, there was a continued push toward rendering wool more luxurious.

“Fifty years ago, wool consumption was higher than ever,” Servente said. “Now, wool is returning and it is the quintessence of sustainable, bio and has become versatile, elastic and more comfortable to the skin than ever.”