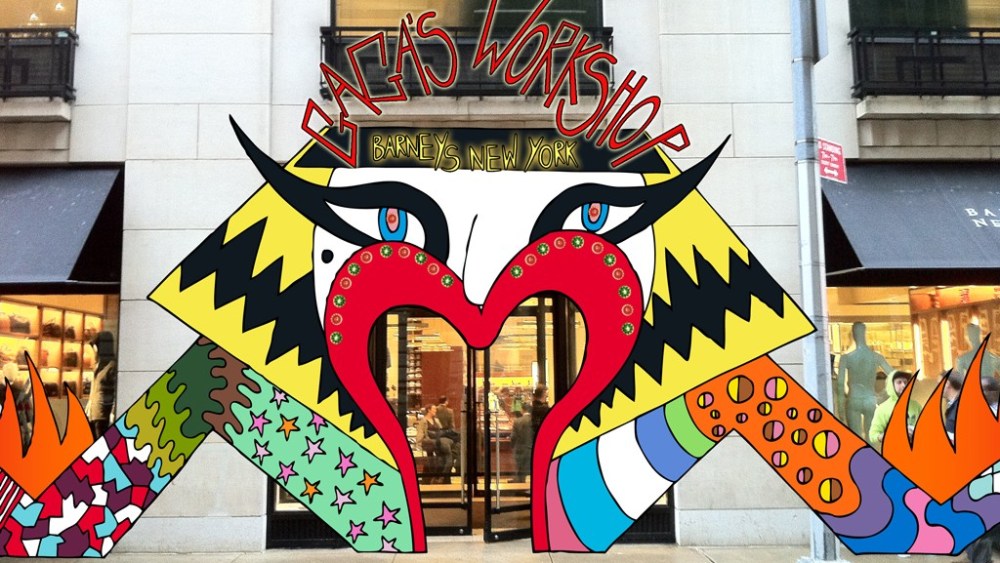 Believe it or not, Lady Gaga’s childhood favorites were quite similar to those of most kids, particularly during the holiday season. The young Stefani Germanotta liked books, especially the works of Roald Dahl, and she had a sweet tooth for candy lipsticks, malted milk balls and gum balls. All of the above — along with chocolate “poker face” chips, disco stick lollipops, hair-bow headbands and press-on nails — will be among the 170 or so items available at Barneys New York’s much-anticipated Gaga’s Workshop.

Today, Barneys kicks the holiday campaign into high gear with a “12 Days of Gaga” countdown and the launch of the barneys.com/gagasworkshop microsite. It will allow glimpses into Gaga’s world and debut a product a day from the workshop until its official unveiling, which has been set for Nov. 21 at 11:59 p.m. The workshop will be open through that entire first night and into the next day, closing on Jan. 2. (Come Nov. 21, a significant selection of merch will be made available for purchase on the site.)

The project has been in the works for nearly a year, with Gaga stylist and Thierry Mugler designer Nicola Formichetti and installation artists Eli Sudbrack and Christophe Hamaide Pierson of Assume Vivid Astro Focus collaborating with Barneys creative director Dennis Freedman and his team to bring Gaga’s world to life in a multifaceted, multimedia campaign.

“It taps into her world and into her imagination,” Freedman said. “It’s the kind of space that is going to appeal to adults as well as children. It’s like going to a movie that you take your children to and [you] end up loving it more than your children, and I think that’s one of the great accomplishments.”

Gaga’s mandate, according to Formichetti, was to make the workshop “amazing and fun, for kids and for adults. She was very much involved in coming up with the ideas and overseeing the whole process, but I also got her mom, Cynthia, involved,” he said. “She knew Gaga’s favorite chocolates or her favorite books when she was little. We really wanted this experience to be like going through her memories, in a very surreal way. For that, I needed the help of Mrs. Germanotta.”

They worked with multiple undisclosed vendors to come up with every item, from $6 chocolate Christmas ornaments to a $4,100 one-off pair of black shoes inspired by the ones she wears in the official Gaga’s Workshop visual. Most pieces, however, are more accessibly priced and intended as small gifts and stocking stuffers, including a $95 Barneys flagship snow globe topped by a Gaga figurine, a handmade chocolate skull for $68 and a clawlike Christmas stocking for $65. “This is the first time you can actually go into a space that has been directed by her,” Formichetti noted. “We have never done a store before. It was very important to make sure that everything has Gaga’s feeling.”

That applied to the actual display features, too. Gaga is a performance artist, thus shoppers entering the store on 60th Street will be greeted by a showstopping Sudbrack-created installation: a giant neon Gaga monster framing the doors. Sudbrack is also transforming the 5,500-square-foot fifth floor, formerly the men’s Co-Op space, into a parkland of sculptures with eight stations that, as the artist put it, are “representations of her and somehow inspired by her.

“We have a candy shop, which is a sculptural piece that holds the candy; the boudoir, this giant wig that will host all the makeup, fake nails and lipsticks; the spider with Gaga’s face with all the fake jewelry and stuff, and this giant pop-up book for all the books Gaga chose.”

A large three-dimensional train, meanwhile, will house stuffed animals, and instead of a traditional Christmas tree, Sudbrack designed a large topiary that spells out Gaga’s name.

The pop star also weighed in on the concept for the store windows, which Formichetti described as “a mixture of conceptual and clothing,” adding that, “We really used it as a performance space. We have taken four different themes for the windows from her songs.” Case in point, a digitalized window will feature a unicorn and Gaga as the Goddess of the Universe inspired by her “Born This Way” persona. Another display will be based on her “Hair” song; the entire space, from the walls to the furniture, will be made of, you guessed it, hair.

This being Gaga, the initiative comes with a significant social media element. Starting today, the microsite will display The Gaga Machine visual with a feature that allows visitors to scan a QR code or type in an alpha code — distributed on stickers all over the city and on barneys.com — to access more information about the workshop. Meanwhile, a Gaga Workshopper feature allows fans to upload their photos into Little Monster frames and post them on Facebook and Twitter, and a Golden Ticket contest will give 30 people a stay in New York and entrée to the opening night.

Proving that it’s no Scrooge, Barneys will donate 25 percent of all sales in the workshop to the Born This Way Foundation — the charitable program Gaga and her mother launched last week, which aims to empower youth and promote equality through programs on antibullying, self-confidence, mentoring and career development.

The big question — the one everyone is asking — is if and how Gaga herself will show up to the Barneys festivities. Whether she will don a red suit and take kids on her lap remains to be seen, but Formichetti thinks she’s already spreading good cheer, regardless of the time of year.

“It’s what she represents,” Formichetti said. “She makes you dream and escape. When you are down, she gives you positive energy, and when you’re happy, she is happy with you. She is everyone’s best friend, even though she cannot obviously talk to every single person. She is almost like a little secret friend.” Or a certain guy named Santa Claus.