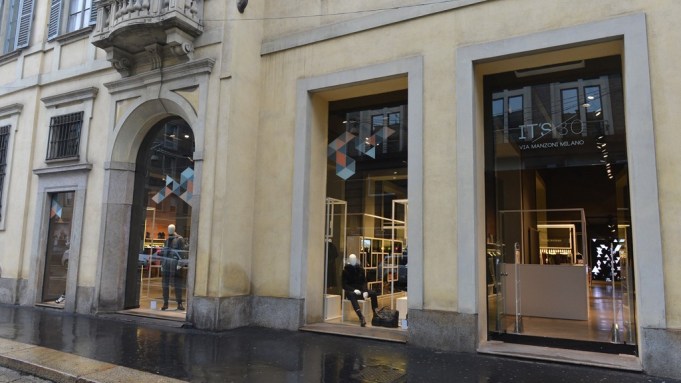 MILAN — Ittierre SpA has unveiled its first department store here, carrying all the brands licensed to the Italian fashion firm.

The 10,800-square-foot store, which will be officially inaugurated Dec. 15, carries ready-to-wear and accessories from brands ranging from Aquascutum, Costume National, Galliano and Pierre Balmain to Karl Lagerfeld Paris and Tommy Hilfiger Collection. The unit also sells innerwear and beachwear for labels including Chloé, Just Cavalli and Vivienne Westwood that are licensed to Albisetti SpA, owned by Antonio Bianchi, who took control of Ittierre last year.

Ittierre also has unveiled its first online flagship to carry all the brands it produces and distributes.

The brick-and-mortar store is called It’s 30 Manzoni since it is located on Via Manzoni 30 opposite Giorgio Armani’s megastore and a few steps away from Via Montenapoleone. The temporary unit, which will be open at least for six months, stands in the 18th-century Palazzo Gallarati Scotti, decorated with Tiepolo and Baroque frescoes.

White metal stands, mirrors and honey-colored oak panels contrast with the original cement floors and ceiling beams. Conceived by Bianchi’s son Alessandro, the store mimics the layout of a department store in a unique setting. “We want the brands to stand out and, with our displays, we’ve been very respectful of the historical building,” said Alessandro Bianchi.

General director Alessandro Locatelli said “Milan is a unique opportunity” in light of the tourist traffic — one that is also emphasized by the palazzo, its strategic positioning and its extensive square footage. He underscored that the project is “a challenge” for Ittierre, which is banking on the “potential of the brands.” The department store could find a permanent location in Milan and be replicated in other cities such as Rome, Paris or London, he explained.

Ittierre has been building a network that today counts 28 directly operated stores and 50 franchised units. In addition to designer stores, such as those for Pierre Balmain and Costume National, there is an existing department store concept in Hong Kong, called Hit Gallery, that carries all the group’s lines and was designed by architect Fabio Novembre specifically for the Asian market. Ittierre plans to open other Hit Galleries in the region next year. Locatelli revealed he is relocating to Hong Kong to better control the expansion of the company in Asia.

Hit Gallery is also the name of the new online store, which will target 35 countries in Europe and the former Soviet Union. Tommaso Bianchi, brother of Alessandro and project manager of the Hit Gallery e-store, said it was a must to offer a “very accessible site, which allows customers to finalize their purchases in four clicks. At the moment, it’s extremely important for Ittierre to develop an online store because it allows at once to reach all the group’s strategic markets at the same time.”

In 2011, Ittierre, which is based in Italy’s Isernia, posted consolidated sales of 190 million euros, or $264.1 million at average exchange.