The more than 3,000-square-foot, two-story location on Madison Avenue is the brand’s third U.S. store and its largest worldwide flagship to date. 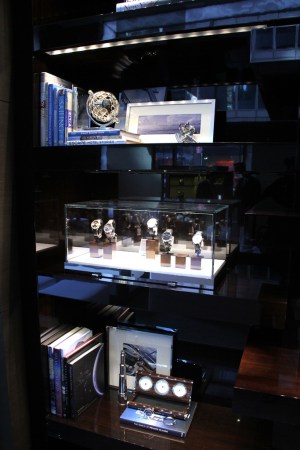 NEW YORK — International Watch Co. Schaffhausen opened its first store here last week, and it’s unlike any of the brand’s other boutiques.

The more than 3,000-square-foot, two-story location on Madison Avenue at 54th Street is the Compagnie Financière Richemont SA-owned brand’s third U.S. store — other boutiques are in Las Vegas and Los Angeles — and it’s the largest worldwide flagship to date. It carries the brand’s six collections — Portuguese, Da Vinci, Ingenieur, Pilot’s Watches, Aquatimer and Portofino, which relaunched in September — and is the only place besides the original flagship in Hong Kong to offer IWC’s entire collection. But what’s different about this door in particular is that each watch family is housed in a setting that complements its unique attributes, including the new IWC Flagship Collection of hand-curated items, “toys for boys” and accessories that reflect each line.

“There’s a lot of movement, it’s not your typical watch store. It’s a different kind of experience. No other mono-watch brand is doing this. We have a clear differentiation. We want to engage the consumer in the store,” president of IWC North America Gianfranco D’Attis said, seated on a vintage cigar chair in ebony leather in the designated Pilot’s Watch room, pointing to a fully maneuverable flight simulator.

“You feel like you’re in an early 1900’s pilot lounge. You’ve got items curated from all over the world to evoke that,” added Maria Tiu, director of marketing for IWC North America. Among these items is a wall of steel lockers filled with actual Top Gun flight gear from the Navy, flying goggles and a remote controlled $38,000 model of a Spitfire mounted on the ceiling.

The store was designed by Christoph Grainger-Herr. The first and largest room one sees upon entering is the Portuguese, named after the brand’s most iconic line. Decor ranges from custom made furniture comprised of couches in white cotton sailcloth to a 6-foot model boat built by John Into, a Wittman, Md.-based master model boat maker for more than 50 years. Across from the Portuguese is an armoire with Portofino timepieces and leather footwear from Italian leather company Santoni, which produced corresponding bracelets in leather and alligator for the pieces in the collection.

In the Ingenieur portion of the store, there’s a $14,800 carbon fiber bicycle next to a slate wall, smoky gray mirrors and real climbing equipment. The Diving Room — equipped with professional diving gear — has watches encased within a lit-up wall with an undersea backdrop, while the Da Vinci section is stacked with art, science and history books, scrolls, globes, a magnifying glass and a quill with ink.

According to D’Attis, the 144-year-old brand is in the process of expanding its U.S. presence, and this door was a key step. As previously reported, through 2014, the company intends to open a store in Miami, and additional locations in Las Vegas and Los Angeles.

On the marketing end, D’Attis voiced the importance of IWC using digital technology to spread the brand message to a new audience.

“The new consumer wants to be part of a social media strategy. We’re combining digital tools with traditional marketing initiatives like print and p.r., but we’re [targeting] this towards the next generation,” he said, adding that an effort is being made to use online to drive foot traffic in-store.

Tiu contended that online is a major focus for the brand, and making sure IWC is digitally savvy is a must. The company has Twitter and Facebook pages and recently joined Pinterest, but for Tiu what’s important are friends of friends talking about the brand on the digital platforms, not just the company talking about itself.