Celebrating a 20-year partnership with illustrator Izak, Henri Bendel frames the artist's work in its windows. 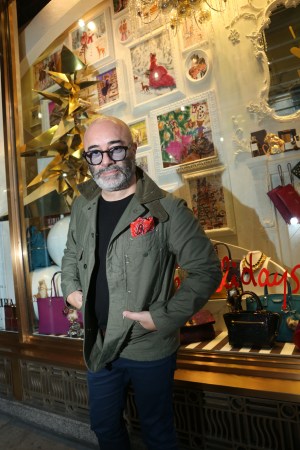 NEW YORK — Izak has painted hundreds of variations of his Bendel girl for the Fifth Avenue retailer, yet he never tires of the assignment. Even after 20 years, Izak continues to find inspiration for his Henri Bendel illustrations.

“Happy and spirited, that’s my girl,” he said, standing in the center of Bendel’s first floor, where his images hang on walls, display cases and decorating products. There’s even a scarf with five girls frolicking across the silk.

“I was finishing a big campaign for Chanel,” Izak said on Tuesday, recalling how the partnership with Bendel’s began. “I showed a promotional piece to Bendel’s and started. In one or two months, I became the in-house illustrator.

The Bendel girl has evolved quite a bit in 20 years, but she’s always an “It” girl of unspecified age and boundless vivacity.

“Initially, my girls were very French-y, with big noses like Maria Callas,” Izak said. “In the beginning, the drawings were very demure.”

That is evident in a black-and-white illustration of a woman glancing shyly underneath a cloche hat and wearing a black jacket that bleeds into the black background.

A recent illustration shows five women with their hair flying in different directions and wearing short dresses, partying at a bar and holding balloons and cocktails.

“I was slowly able to infuse my sense of style,” Izak said. “They gave me that freedom. It’s been an amazing playground for me.”

The Bendel girl is alive and well in the retailer’s holiday windows, inspired by a Parisian apartment replete with a fireplace and chandelier. A white winding staircase draws the eye upward toward the Venetian plaster decorative border and Izak illustrations in while frames.

In the store, Izak illustrations are illuminated in marquee light medallions over the entrance. Izak works sit on easels on the balcony and the artist on Tuesday evening drew the likenesses of guests at a reception celebrating the holiday windows.

Izak has certain faces in mind when he does his illustrations. “Natalie Portman, Charlotte Gainsbourg, Kate Moss and Ines de la Fressange” are a few of his favorite women. “I love Natalie Portman, but she’s too perfect,” he said, adding that he loves to add spontaneous “flaws” to illustrations, such as dots of black or other colors.

“These are whimsical illustrations,” he said. “I can push a little bit.”

Izak is aware of fashion and chooses the styles for his girls. “I love The Row, Valentino, Prada,” he said. “I love streetwear chic from Alexander Wang and the whimsy and craziness of Marc Jacobs. It’s about an attitude.”

Something Izak almost always incorporates into his illustrations is the trademark brown and white stripes that are Bendel’s signature. He often has girls holding striped Bendel’s hat boxes, shopping bags, totes and cosmetics bags. One image shows a girl lying on a rug surrounded by beribboned Bendel’s products. There’s a redhead riding a bike that has piles of Bendel’s boxes on the bike rack.

“The hair is an important element,” Izak said. “It’s the essence of femininity.”

Izak also has illustrated advertising campaigns for Sephora and L’Oréal. A $20 million licensing business features his illustrations on everything from luggage to credit cards.

“I use watercolors, China ink and bamboo reed,” Izak said. “I play with colors. And spots…I love spots.”