Iziz’s Avocado to the Rescue

NEW YORK — Iziz Dezigns wants to capitalize on Baby Boomers’ complaints that they can’t find anything to wear.

The Menlo Park, Calif.-based company has launched a shopping concept aimed at women aged 35 and older who have lots... 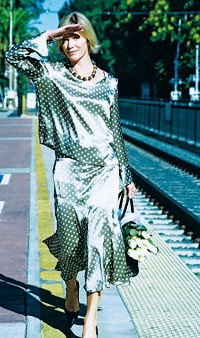 NEW YORK — Iziz Dezigns wants to capitalize on Baby Boomers’ complaints that they can’t find anything to wear.

The Menlo Park, Calif.-based company has launched a shopping concept aimed at women aged 35 and older who have lots of disposable income but feel today’s fashions often overlook their needs. The Atelier Avocado Collection features made-to-measure clothing in luxurious fabrics at bridge prices ranging from $120 for a silk shell to $1,500 for a 100 percent cashmere wrap coat lined in silk.

On Sunday, the company held an open house at its Atelier Avocado store, located in an historic inn in Menlo Park in the heart of Silicon Valley, close to Stanford University. The company plans to open two more stores in Northern California next year, then roll out the concept nationwide. If all goes according to plan, the company hopes to become at least a $100 million business in five to 10 years, said Iziz chief executive officer Judy Balint.

Iziz isn’t the only fashion company interested in this market segment. Eileen Fisher and Chico’s have successfully targeted Baby Boomers, and Gap is developing a retail format to do the same.

Balint has worked at three startups and was formerly an executive with E*Trade Financial Group, Federal Express and DHL. Designer Fiona Henderson comes from Krizia, Paul Smith and the Limited Express in Hong Kong. The Avocado concept has been in the works for three years, though it was incorporated only in April 2003. Prior to launching Iziz with her own savings, Balint took two years off to complete a degree in fashion design at the Academy of Art University in San Francisco.

“Fiona has created a collection that is inspired by European classics and interpreted for the California lifestyle,” said Balint. The concept is based on extensive market research and focus groups, and is intended to appeal to the 17 percent or so of Baby Boomer women with household incomes of $100,000 or more.

“Women were telling us they were frustrated with the shopping experience,” she explained. “They couldn’t find people who could really help them select clothes; they couldn’t find clothes that fit, and they couldn’t find styles that were age-appropriate. Designers do not focus on designing for women who are 35-plus. Either the clothes are for their daughters, who are 18, or their mothers.”

This story first appeared in the October 13, 2004 issue of WWD. Subscribe Today.

In addition, Balint’s research revealed that the reason for 70 percent of clothing returns is fit.

Avocado aims to fix that by offering trend-relevant, but “not ridiculous,” styles chosen to flatter an individual women’s coloring and body shape. The store, open by appointment only, is warm and inviting with a fireplace and classic decor in shades of bronze and cream. The service concept is similar to a spa, in which a woman gets individualized attention and pampering for about an hour.

Clients can see a presentation of the collection on a flat-screen TV in the sitting area, and in the “atelier,” which is like a dining room with a big table and six chairs, they can look at samples and play with fabrics. If a customer cares to try on a sample or be measured, she gets to stand on a pedestal while wearing leggings and a silk robe so she doesn’t feel exposed. An order takes about three weeks to complete and, as of Monday, the company had received two orders, said Balint.

The Avocado concept of a chain retailer that offers made-to-measure clothing will be helped along by software from OptiTex Ltd. In the future, the company plans to create individual three-dimensional avatars, or virtual dummies, for each client, so they can see accurate 3-D renderings of what they will look like in particular designs and fabrics, using OptiTex’s Runway 3D. Iziz Dezigns also plans to use the same software and avatars to fine-tune fit for individual clients without requiring them to return to the store or the company to send a garment back and forth from the factory to the store.

Nonetheless, the Avocado designs are not strictly tailored, and each customer will get a final fitting at the store, said Balint. The company is also using Modulate, OptiTex’s made-to-measure software, to create patterns for each customer. Iziz Dezigns currently employs eight people and sews the clothes in its own workshop in San Francisco. The company plans to subcontract production out locally when orders increase.

The company’s label, Avocado, was chosen because it reminded the staff of the “beautiful, primitive shape of the goddess,” said Balint. And, “It’s a luxury fruit and a green fruit,” she said. The line uses primarily natural fibers, including organic cotton. The name echoes that of Mango, the popular European brand, although Avocado is much more about individual beauty than the latest trends and is also more expensive.

“We’re trying to break the mold,” Balint said. “This is all about women looking good naturally, not about nip and tuck, Botox and all those things.”