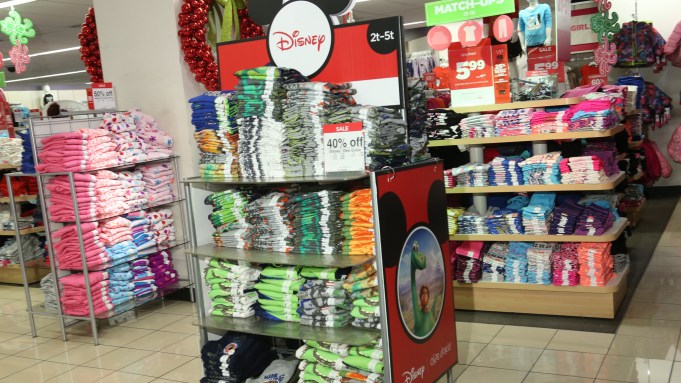 At 10 a.m. on the Monday before Thanksgiving at J.C. Penney in Manhattan, general manager Joe Cardamone does what he always does when the store opens — walk the floor. And he stays with it throughout the day.

“Boots — they’re going to be huge. I’ve got to show you these,” said Cardamone, as he guides a guest to a stretch of private brand Arizona side-zip leather boots, original priced $90, marked down to $39.99, and dropping to $29.99 for a Thanksgiving Day doorbuster. Next to them are Arizona booties, originally $70, but selling at $29.99, and dropping to $19.99 on Thanksgiving. “There’s no way the competition is ever going to come close to these,” he added. “We own some great items at great prices.”

It’s clear that this holiday season Penney’s is taking its promotional pricing to another level and looking better with reinvigorated inventories more in sync with what Penney’s customers want, compared with recent past seasons. Penney’s, said Cardamone, feels like the Penney’s of old, partly because the new regime led by chief executive officer Marvin Ellison encourages store managers to act with a degree of autonomy, but also because Penney’s has emerged as competitive as it’s been in years which is apropos to a season expected to be as promotional, if not more so, than any in recent history. Promoting is squarely in Penney’s wheelhouse. Penney’s sales trends last quarter were better than most of its peers, but the middle-American chain, at $12.5 billion in revenues for the trailing 12 months, is still in turnaround mode and needs to recover market share. The chain had $18.5 billion in sales in 2008, but lost billions in revenues during the disastrous Ron Johnson tenure from 2011 to 2013.

Still, Penney’s in Manhattan remains among the top four or five volume producers in the chain, along with older units in the Bronx, Queens and Puerto Rico. As Penney’s first and only Manhattan store, it naturally came under scrutiny, initially cited for being overbloated with merchandise and hard to shop, being a two-level below ground store with low ceilings. Inventories were eventually reduced and aisles were de-cluttered for easier shopping. Today, the store seems heavily merchandised for holiday, though Cardamone said inventories overall are about even with last year’s. Compared to other Penney’s locations, it’s more career-oriented for women, with a big presentation of Nicole by Nicole Miller for example, and Penney’s new and first “fast-fashion” collection called Belle + Sky, which was introduced in August. Each quarter, the collection completely changes. Currently, it shows a lot of stretch, denim and evening dresses, including a black evening dress for $29.99, marked down from $55.

The store is dwarfed by the Macy’s flagship a block north, which is 2.2 million square feet. But Penney’s last quarter showed stronger selling trends than Macy’s and seems ready to stand its ground this holiday.

“We started staffing up the first week of October,” Cardamone said. “We hired 100 seasonal associates,” bringing the total for the holiday season to 400. Seasonals work through the first week of January, including some who will be hired on a permanent basis.

During the holiday stretch, two-to-four truckloads of merchandise arrive to the store each night, for a delivery rate roughly 50 percent higher than the rest of the year. Last week, Penney’s in Manhattan began offering same-day pick up for customers placing orders on jcp.com, and is among the first units in the chain to provide the service. The store can also ship products ordered online but Cardamone said that doesn’t happen much.

All of the registers are being staffed from the get-go, Cardamone said, and there will be “linebusters” with hand-held devices scanning the merchandise customers have, as they wait on checkout lines for the registers. The linebusters hand each shopper on line a bill for the goods so by the time they reach the register, they only have to pay. “That saves a lot of time — five to seven minutes a customer,” Cardamone said. “We had linebusters last year but we will have more this year.”

Penney’s has extended its hours to get a head start on the competition. Stores open at 3 p.m. Thanksgiving Day, which is three hours before Macy’s Herald Square opens. Penney’s will stay open continuously until 11 p.m. Friday, and reopens at 8 a.m. Saturday. Penney’s is taking some heat for its Thanksgiving schedule, but according to Cardamone, “Eighty percent of our associates want to work overtime. They asked to work even before we started scheduling.” They were motivated by Penney’s decision to pay double time this year for overtime, while last year they received time-and-a-half.

With the deep discounting, Cardamone isn’t worried about running out of inventory. “Trust me — I’ve got a team in place that will keep the shelves filled. I’ve got as many [stockkeeping units] on the floor as in the back,” he said referring to the women’s boots. Then there’s the company’s allocation team, Cardamone added, which tracks sales and notifies the home base if additional sku’s need to be shipped to meet the demand, and while back-of-the-house space is limited, the store does utilize a warehouse in Manchester, Conn. to replenish merchandise.

On the men’s side, the private St. John’s Bay brand, along with Docker’s and Izod, both national brands, will be the biggest attractions for holiday, Cardamone predicted. “St. John’s Bay is our number-one label for men’s,” occupying about 1,000 square feet of the store for holiday, up from 500 to 700 square feet from the rest of the year. “Now it’s propped up because of all the sweaters” for holiday, Cardamone said. He singled out the crewnecks, priced $19.99 and reduced from $42, and noted they’re set to be further reduced to $14.99 as Thanksgiving Day doorbusters. “That’s a heck of a price and we’ve improved the quality. We’ll sell thousands of them….You are going to see a lot of items up to 70 percent off throughout the store for doorbuster deals.”

Another key holiday category for Penney’s is activewear, across men’s, women’s and kids. Nike is the leading brand, with sweatshirts currently marked down to $41.25 from $55. T-shirts are down to $18.75 from $25.

Penney’s exclusive Disney shop is expected to be “a hot spot,” Cardamone said “There is a good 30 to 40 percent more inventory because of the Disney movie, ‘The Good Dinosaur.'”

Private brand cookware is also primed for holiday, with Penney’s offering, among other deals, 12-cup programmable coffee makers under the Cooks label, currently priced at $24.99 and dropping to $19.99 on Thanksgiving Day at 3 p.m. until 2 p.m. on Friday. The kicker is the $12 mail-in rebate which brings the price down to $7.99. There is also a 12-piece cookware set, originally priced $100, selling for $27.99 and on Thanksgiving Day dropping to $19.99 from 3 p.m. until 2 p.m. on Black Friday. “Look at all this cookware and appliances,” Cardamone suggested. “The prices you see here, if you compare to our competition, especially Kohl’s, it’s not even close, particularly with the quality and the selections customers get here.”

“This is my 41st Black Friday,” said Cardamone who started his Penney’s career managing the store in his hometown of Rochester, N.Y. “Last year on Thanksgiving Day, we had 1,000 customers lined up at the door for the 6 p.m. opening. This year we are opening at 3 p.m. We expect the same, if not bigger, crowd.” About 5,000 shoppers a day, on average, visit Penney’s from Black Friday through the season.

Asked what he thought is his biggest challenge, Cardamone said, “I think through the holiday we have to make sure every customer leaves with something. We’re focused on helping shoppers pick out versus just pick up.” Another challenge has been the unseasonably warm weather, hindering outerwear and sweater sales. “The weather has been a big factor,” Cardamone said. “This weekend [in New York]  will be in the Sixties, but I feel good about Christmas because we have had some good trends and we are better-positioned from a year ago,” from merchandising and pricing standpoints. “Customers are very price conscious, more so than past years — without question.”