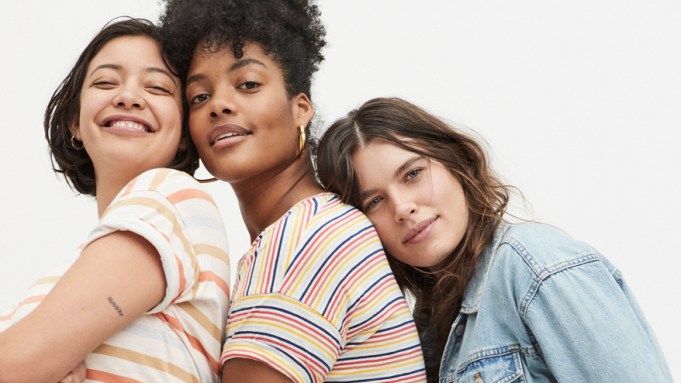 J. Crew Group will expand its sustainability efforts by launching its first Fair Trade Certified collection today for its J. Crew and Madewell brands. The initial product will be an assortment of more than 30 styles of denim jeans for men and women that were made in a newly certified factory in Vietnam.

“We have admired Fair Trade and all they do and have been working with them for the past year or so,” said Libby Wadle, Madewell Brand president.

The company funded the Saitex Factory for its Fair Trade certification and is looking into several factory locations to be added to the roster in the near future.

Fair Trade USA is a third-party firm that works with companies and their suppliers to ensure safe working conditions, protect the environment, build sustainable livelihoods for employees, and help them earn additional money to give back to their communities.

The initiative has its largest reach within the food industry — it started 20 years ago with coffee — but is now working to certify apparel and home goods factories as well.

Wadle said J. Crew sought out a factory that produced some of its best-selling styles and categories, “and landed on denim,” which is what Saitex has produced for the brand in the past.

She said this is not J. Crew’s first foray into sustainable fashion, but the expansion of the program came as a result of the “appetite from customers.”

For example, the retailer has a successful program called Blue Jeans Go Green where consumers can bring their old jeans in for recycling and get a discount on another pair. The old jeans are upcycled into housing insulation.

Gonzalo Pertile, director of corporate social responsibility at J. Crew Group, said this is part of a broader five-year plan by the company to bring more of its factories into the program.

He said the company works with factories in 26 countries around the world and will nominate other facilities to be added to the Fair Trade program and pay the cost for them to become certified.

The Fair Trade Certified collection features 19 J. Crew styles and 16 Madewell styles and will retail for $59.50 to $128 on the web sites of both brands. Wadle said the pricing is no more expensive than other products.

She said the certification will be explained on the web sites, as well as through e-mails, on social media and in stores to educate consumers about the process.

Maya Spaull Johnsen, vice president of apparel and home goods at Fair Trade USA, said she was “so excited to have J. Crew join our growing number of brands. The company reaches a multitude of consumers with a different type of style than Patagonia, Athleta” and other participating brands that are more centered around outdoors and athletics.

The nonprofit organization partners with more than 1,300 brands to certify more than 30 product categories. The first apparel and home goods factories were certified in 2013, and now count 48 certified factories with an additional 39 in the pipeline. These factories directly benefit more than 77,000 factory production employees in 13 countries. The program has generated well over $7.5 million in additional income for factory staff and their families.

Johnsen said Patagonia, which was the first company to get involved, now certifies 67 percent of its products.

“It’s interesting to see companies embrace this as core to what they do,” she said. “And the ethical consumer wants it. This is not a trend, people want to know where their clothes are made, to know that they’re not contributing to environmental degradation and that people are working in safe conditions and making a wage they can live on.”