J. Crew Group said Tuesday it has reorganized and streamlined its top management team and is eliminating 150 full-time jobs and 100 open positions, primarily from its corporate headquarters, to save approximately $30 million annually.

The company will record a charge of about $10 million in the first quarter of fiscal 2017 for severance payments and other termination costs.

Among those who have exited the company in this round is longtime men’s designer Frank Muytjens, who has been leading the men’s category since Todd Snyder left the company in 2008.

The reorganization of senior-level management is geared to streamline operations and help the company respond faster to changing consumer demands and market conditions and reverse recent disappointing results.

An eventual successor to J. Crew Group’s 72-year-old chairman and chief executive officer Millard “Mickey” Drexler is being sought. However, a source close to the company said the senior management changes announced Tuesday don’t reflect a succession plan and that Drexler remains entrenched and very engaged in fixing the business.

In the management streamlining, the corporation’s president, chief operating officer and chief financial officer Michael J. Nicholson has been given additional responsibilities for the J. Crew brand, including the planning and allocation, merchandising, marketing and design functions. Nicholson joined J. Crew in 2016 and has been instrumental in directing J. Crew’s strategic evolution. He will continue to report to Drexler.

Lisa Greenwald has been named chief merchandising officer of J. Crew’s women’s and men’s collections and crewcuts, the kids’ collection. Most recently, Greenwald was senior vice president of merchandising for Madewell, a division of J. Crew Group. Greenwald will report to Nicholson. She joined J. Crew in 2004 and has held various positions of increasing responsibility in the J. Crew and Madewell merchandising organizations.

In addition, Libby Wadle has been named president of the Madewell brand. Wadle was president of the J. Crew brand. She will continue to report to Drexler. Wadle  joined the company in 2004 and has held senior management roles in different areas of the business, including J. Crew Factory and Madewell.

Earlier in April, J. Crew veteran Jenna Lyons left the company as president and creative director. The role will not be filled, though Lyons continues in a consulting capacity. She worked at J. Crew for 26 years and was involved in design, visuals and brand aesthetics.

The company said the men’s wear design will be handled by the company’s in-house team, who will now report to Sikhounmuong. Muytjens could not be reached for comment Tuesday on his plans.

While the departure of Lyons has been a hot topic in the industry, “The key management change of recent years was not the departure of Jenna Lyons but the naming of Mike Nicholson, former chief operating officer of Ann Inc., as J. Crew Group president,” in December 2015, said Craig R. Johnson, president of Customer Growth Partners.  “Mike’s rise since last year and now today, along with the creative skills of Somsack and his Madewell team, made Jenna’s departure almost inevitable,” Johnson said, adding that the cost-cutting will help return the company to healthy growth and provide a cost structure that better matches lower sales volumes.

“Today’s retail environment is changing more rapidly than ever before. Customers demand greater speed-to-market, convenience and personalized shopping experiences,” Drexler said Tuesday. “At J. Crew, we are embracing this change and making necessary adjustments to our business and teams to move us forward in a more efficient and dynamic way. We have an incredibly talented team of passionate leaders and will further leverage their strengths and talents as we continue to focus on making critical improvements in our business.” 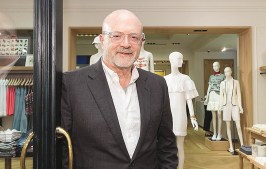 Regarding the headcount reduction, which represents roughly one-quarter of the team at the headquarters, Drexler said: “We take these difficult decisions very seriously, but believe they are absolutely necessary. We are streamlining our teams as we evolve our business and processes to cater to the new demands of the retail industry. While challenging, we know what needs to be done and this is a critical step to position J. Crew for the future. We are committed to treating impacted associates with respect and support through this period of change.”

J. Crew Group has been working to turn around its J. Crew brand, while the Madewell brand has been performing well and growing. J. Crew has $1.5 billion in debt and is fighting with some creditors over a move late last year that put nearly three-quarters of the J. Crew trademark in a separate subsidiary. J. Crew’s revenues slipped 3.2 percent to $2.4 billion last year, with a 7 percent comparable-sales decline.

While reducing its overhead, Drexler and the team are working to hone the J. Crew product while maintaining the personality of the brand; better meet the needs of customers and pay more attention to their feedback, and change the perception of its pricing from being too high and exclusive to accessible and affordable. In addition, the company is working to be more digitally focused.