J. Crew Group Inc. is advancing its global retail agenda this week via high-profile maneuvers for two of its divisions.

By David Moin and Ellen Sheng on May 21, 2014
View Slideshow 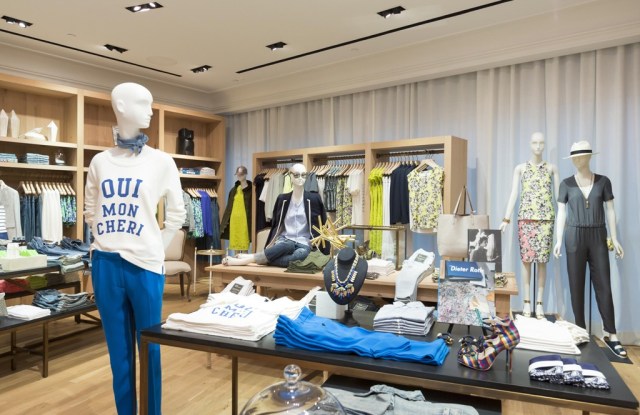 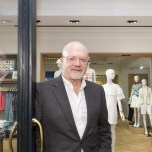 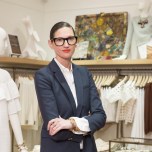 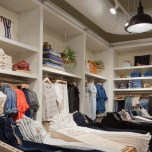 J. Crew Group Inc. is advancing its global retail agenda this week via high-profile maneuvers for its J. Crew and Madewell divisions.

The company will open J. Crew men’s and women’s units on Thursday in Hong Kong’s Central district, marking its first two stand-alone stores in the Asia-Pacific region. The Madewell division, which is designed and operated separately, opens a unit today on New York’s Madison Avenue, flaunting a new store design that plays up the brand’s strengths.

Madewell is stepping up its U.S. expansion, with store openings since February in Portland, Ore.; Bridgewater, N.J.; Carlsbad, Calif.; Jacksonville, Fla., and Charleston, S.C. In August, Madewell stores will open in Richmond; Dedham and Hingham, Mass.; Louisville, Ky., and Murray, Utah. A total of 18 openings are seen this year.

The expansion of the two nameplates comes as there is recurring speculation that J. Crew Group’s owners, TPG and Leonard Green & Partners, might seek an initial public offering or sale of the business. But the retailer’s chairman and chief executive officer Millard “Mickey” Drexler on Tuesday played down the possibility of an IPO or sale.

“For investors to get returns, the only way to see a return on investment is probably to go public or sell the company,” he told WWD. “That’s true of any company. We have no plans to do either at this point.”

The team at J. Crew, Drexler stressed, is running the business for the long term and to build a larger customer base. The overseas expansion for J. Crew has been extended to find a Paris location.

“Most importantly, our clothes and our accessories represent a business that we don’t see specifically similar to that in terms of design and style, quality service and value. I think as long as we do that, we win,” said Drexler, who was interviewed fresh off a flight to Hong Kong to celebrate the openings there.

He explained that the separate men’s and women’s shops in Hong Kong came about because retail space in the city tends to be small. The women’s shop, located on the ground floor of IFC Mall, is 3,252 square feet and offers a selection from J. Crew Collection along with more basic T-shirts and shorts plus Point Sur denim, jewelry, accessories and shoes. The men’s shop, located a few blocks away on On Lan Street, is 2,816 square feet spread over three floors. It includes a full range of J. Crew’s Ludlow suits, plus Wallace & Barnes denim as well as sneakers and shoes. Both stores will offer a VIP program with special services such as home or office delivery, monogramming, alterations and stylist appointments.

The IFC location, formerly a McDonald’s, became available first but it wasn’t quite large enough to “do justice” to a combined men’s and women’s store. It all turned out for the best, said Drexler, as “I think guys like shopping in their own environment.”

Relatively late to international expansion, J. Crew began selling on Net-a-porter.com in 2010 and has been selling its apparel at six Lane Crawford stores in Hong Kong and Mainland China since 2012. J. Crew also distributes to many countries via jcrew.com.

Like at Lane Crawford, J. Crew’s mix of merchandise at its stand-alone stores in Hong Kong skews toward the higher end of the price range, with a heavy emphasis on Collection pieces.

“It’s more reflective of what you would find of some of our New York stores or stores that are geared toward Collection products,” said Jenna Lyons, the firm’s president and executive creative director. Lyons and Drexler emphasized that there is a mix of high- and lower-priced items, from $35 to $1,200.

Prices in Hong Kong skew higher than in the U.S., Drexler acknowledged. “I don’t know where that’s not the case. It’s just the cost of doing business, currencies and all. We are no higher or lower relatively speaking than all the other competitors out there. For some reason, people talk about it,” the ceo said.

Other than the prices, the store’s look and selection are similar to those in the U.S. While some retailers feel it’s beneficial to introduce exclusive pieces or specific collections for the region, J. Crew doesn’t see the need. Launching with Lane Crawford “gave us a lot of insight into who the customer wasn’t and what he or she was looking for. We’d been told by many people that we might need to do a special product and the fact is that it’s been the exact opposite for us,” said Lyons.

J. Crew opened its first store outside the U.S. in 2011, in Canada. Since then, the retailer has expanded to more than 100 countries through jcrew.com, opened three stores in the U.K. and sells through its Lane Crawford partnership in Asia. The retailer is also planning a fourth location in the U.K. later this year and eyeing Paris for a site.

Before Drexler joined J. Crew in 2003, the retailer expanded quite rapidly overseas, at one time operating 65 licensed stores in Japan. The company then pulled back and shuttered the stores. Drexler has said he is taking a slower and more targeted approach to international expansion this time.

For now, Hong Kong is J. Crew’s largest market in Asia. Japan is in the top five. Drexler said he’s looking at more locations in the city but first “wants to see what happens over the next few months here.” The retailer doesn’t have any plans to open elsewhere in the region as of yet.

So far, the expansion of Madewell is focused on the U.S. At the eight-year-old brand, which Drexler started, “we’re cleaning up our store layouts and making them feel more loftlike and industrial,” said Somsack Sikhounmuong, the brand’s head designer, giving a tour of the Madison Avenue store, situated between 84th and 85th Streets. It’s filled front to back with hanging black pendant lamps, evoking old factories, and other special touches, like the kilim rug and the reupholstered vintage ottoman in the accessories section. Sunglasses are stacked on small wood platform displays, and jewelry is displayed like art, on framed canvas push boards.

The store has 2,500 square feet for selling and a more intimate feel than others in the chain, given that the denim, accessories, jewelry and swim categories are clearly defined by having separate areas. “There’s lots of denim. It’s always about what would look good with the denim,” said Sikhounmuong. The denim bar, including “skinny skinny,” “high-riser” and “skinny crop” styles, has gridded shelving units, making it easy to shop. “Other than denim, accessories is another category we want to be known for,” said the designer, who pointed to the “transport” tote, a key item, which can be monogrammed on-site for free this week.

He also highlighted the robust range of sandals, ranging from flat to heeled and dressy styles; the “sun and sand shop” with separates and one-piece swimsuits, cover-ups, muscle T-shirts, maxidresses, suntan lotion, totes and even Panama hats and the extended third-party assortment including Chimala premium jeans and Vans slip-on sneakers with Madewell’s Indian block print, as well as items from Birkenstock, Bamboula, Honeydew, JanSport, Piece & Co., Superga, NSF and Mara Hoffman, among other brands.

“The message for spring or summer is what you would pack for your travels or find along the way on your trip,” said Sikhounmuong. “Easy, no fuss, effortless pieces.”