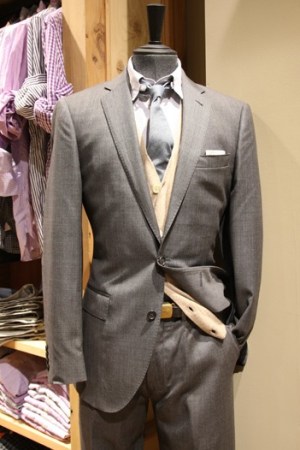 J. Crew will open its third men’s-only store today at 484 Broadway in Manhattan, sandwiched between the new Topshop/Topman and the company’s Madewell women’s concept.

The 3,406-square-foot men’s store is in a 19th-century building in SoHo and features a curated and edited assortment of J. Crew standards, limited edition product and vintage pieces. It also houses the company’s first Suit Shop space dedicated to tailored clothing.

“As we started to develop our men’s business from a design, edited and curated point of view, we felt we couldn’t effectively articulate the assortment in our normal J. Crew store,” said Millard “Mickey” Drexler, chief executive officer. “We saw an opportunity in the marketplace for a store that is dedicated to men only, where a man would see it as his world and he didn’t have to share it with women’s or Crewcuts [the company’s children’s wear concept].”

As a result, the company removed men’s from the 2,600 square feet that it occupied on the lower level of the 13,000-square-foot J. Crew store on Prince Street, a few blocks north, to give men’s its own home. The decision also allowed the retailer to expand its women’s collection and Crewcuts selection on Prince Street, Drexler said.

The Broadway unit joins men’s stores on West Broadway in TriBeCa, known as the Liquor Store because of its location in a former bar, as well as in Garden State Plaza in Paramus, N.J. The TriBeCa space, J. Crew’s first men’s-only store that opened in August, retains many of the hallmarks of the former watering hole, including the bar, fireplace and the old neon sign outside the entrance saying “Liquor Store.” That space, however, is only 925 square feet.

Upon entering, a center table offers pieces from the company’s Always List of must-haves, which include gingham ties, chambray shirts, cashmere sweaters and chino pants, displayed alongside the third-party brands. For example, a Baracuta jacket is shown with J. Crew white carpenter pants. Jeans are offered in medium-dark washes only, and vintage-inspired J. Crew classic T-shirts have been expanded to encompass polo and henley styles, as well. Accessories include vintage ID bracelets, tie bars and money clips.

“The store is a curated version of J. Crew,” Muytjens said. “It’s our chance to show a guy how to combine all of the elements.”

In the rear is the Suit Shop, which is sectioned off from the rest of the store and has its own fitting rooms. The company is offering three styles of suits: the classic Aldridge as well as the slimmer Ludlow, which retail for $375 for jackets and $175 for slacks and are sold as separates. A made-in-Italy model, as yet unnamed and not priced, is set to make its debut within the next few weeks, Muytjens said.

“The Liquor Store showed us we could sell suits,” he added. “So we took the opportunity to offer more of them in a larger space. It’s another way that we’re working to elevate the men’s brand.”

To create a masculine vibe, J. Crew restored the building’s original storefront, including the thin metal moldings and front glass window. There are coffered ceilings and black lacquer accents and reclaimed barn-wood knotty pine was used for the displays and floors. Antique furniture, including tables and chairs, are also used as display pieces.

“It’s masculine but warm and a little moody,” Muytjens said.

Although men’s has been a challenging business recently for J. Crew, Drexler said opening men’s-only stores is “not a short-term decision” for the company. “We see a lot of opportunity for the long-term positioning of men’s business. As we look at the landscape, we believe there’s not enough choice out there for hip, cool, high-quality clothes that are edited carefully. And then you factor in the price, and it’s clear that we offer more value.”

Drexler said the next men’s-only space will open at the end of this month in J. Crew’s expanded East Hampton, N.Y., store. Men’s will have its own entrance and will encompass 1,200 square feet adjacent to the women’s store. That is the only other men’s unit in the works, Drexler said.