It's a new role at J. Crew and a critical one in getting customers more engaged with the struggling brand.

It’s a new spot in the organization and crucial to the company’s efforts to restore the J. Crew brand back to profitability and get customers more engaged with the label, as they once were.

As reported, the company is seeking to launch a Madewell initial public offering, possibly in the second half of this year, to satisfy debt holders and give a new lease on life to the troubled J. Crew brand. An IPO would also pay a return to the company’s private equity backers, TPG Capital and Leonard Green & Partners. J. Crew Group has $1.7 billion in debt, with the biggest portion being a $1.4 billion term loan due in 2021.

May, who joins J. Crew on July 15, has a strong background in direct-to-consumer and e-commerce operations. At J. Crew, he will lead customer-facing aspects of the business and will be responsible for “advancing J. Crew’s digital transformation across marketing, loyalty, stores and e-commerce,” the company said Monday.

May will report to Michael J. Nicholson, interim chief executive officer of the J. Crew Group.

“Billy’s significant industry experience across a range of well-known consumer brands, and his track record of innovative leadership in omnichannel marketing will elevate customer engagement across our digital, mobile and store channels,” Nicholson said. “He brings a collaborative, integrated approach to brand development, and we are looking forward to partnering with him to return J. Crew to profitability and long-term growth.”

May said he was “eager” to work the J. Crew team “to reignite the brand and more actively engage J. Crew’s customers.” 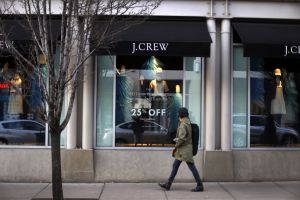 May was most recently ceo of Sur La Table, a privately held kitchenware retailer based in Seattle. Earlier, he was a senior vice president at Abercrombie & Fitch, where he led marketing, direct-to-consumer and corporate development globally. According to J. Crew, while May was at A&F, he established the company’s digital presence, scaled its $1 billion e-commerce business, developed an integrated, omnichannel operating model, and launched two branded loyalty programs. Earlier in his career, he served in digital and business leadership roles at Adidas Group and Lowe’s Cos. He started his career as a management trainee and buyer at the former May Department Stores Co., which merged into Macy’s in 2005.

J. Crew’s last ceo was Jim Brett who left in November 2018. A team of senior executives led the company until last April when Nicholson was named interim ceo.