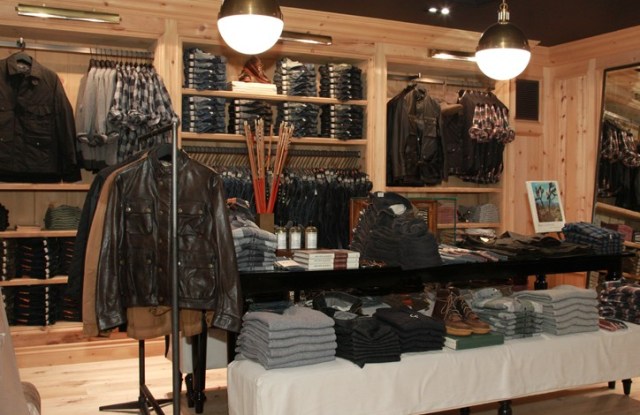 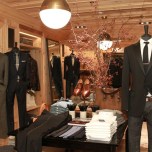 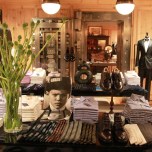 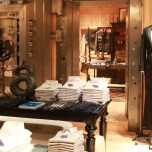 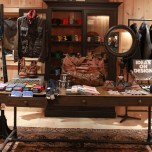 J. Crew is saving its men’s customers on the Upper East Side cab fare.

Today, the specialty store retailer will open its fourth men’s-only store, a 3,400-square-foot, two-level unit at 1040 Madison Avenue at 79th Street, across the street from a J. Crew women’s collection boutique.

The men’s store joins two others in Manhattan — the pioneer, a unit on West Broadway in TriBeCa, known as the Liquor Store because of its location in a former bar, and one in SoHo at 484 Broadway. There’s also a mall location, at the Garden State Plaza in Paramus, N.J.

Each of the units is unique to its locale, and Madison Avenue is no exception. The paneling and floors are constructed from unfinished knotty pine, giving the store a cozy, rustic feel. The pine contrasts with a black ceiling and is highlighted by David Hicks pendant lamps. “I like how knotty pine weathers,” said Frank Muytjens, vice president of men’s design. “It’s like a leather jacket that you wear in.”

The overall design of the store takes its cue from old men’s clubs, he added, pointing to the Danish leather chairs and industrial metal display tables. “It feels like a haberdashery.”

Like it did in the Liquor Store, J. Crew retained elements from the store’s former use, in this case a bank, using the vault on the lower level as an intimate location to merchandise accessories such as Corgi socks, Mister Freedom belts, Hill-Side ties and scarves and sportswear including Belstaff jackets.

Muytjens said the decision to open an uptown store was “born out of the growth of the suit business.” He said customers from uptown would venture to the Liquor Store or SoHo to buy suits, so “it made sense to open a store for them on the Upper East Side.” The assortment of tailored separates is about 15 percent higher than at the other men’s stores and includes an exclusive cashmere version of the company’s slim-fit Ludlow suit. It’s available in a two-button silhouette with double vents and pickstitching on the lapel. With a jacket that retails for $995 and pants at $495, the suit is priced significantly higher than a traditional Ludlow suit, which sells for around $600. “We’re elevating the product here more than ever before,” he said. “This is a huge step up, but it fits here.”

J. Crew introduced suits when it opened the Liquor Store in 2008, expanded the assortment with a Suit Shop in SoHo and now is “making an even bigger statement,” Muytjens said. “We see the suit business as a huge opportunity for us in this location.”

The company is calling that out right inside the front door, where it showcases suits and suit separates. “When you walk in,” Muytjens said, “you will see a suit statement, but in a rugged, sophisticated way.” Although there are tuxedos, for example, Muytjens has shown the jacket with jeans. “It’s for the guy who is not loud but still wants to be seen,” he said.

Throughout the store, vintage and new books are available for sale, along with DVDs. “They’re what we’re inspired by and what has meaning to our customer,” he said.

Men’s overall accounts for around 25 percent of the company’s $1.4 billion volume and is an important priority for the company. At the annual shareholders meeting in June, Millard “Mickey” Drexler, chief executive officer, said men’s had been “a nongrowth business for decades.” But the men’s-only initiative “has reinvented the business for us.”

Next up, J. Crew will take its men’s concept on the road. A store at Copley Place in Boston is slated for a late September opening.