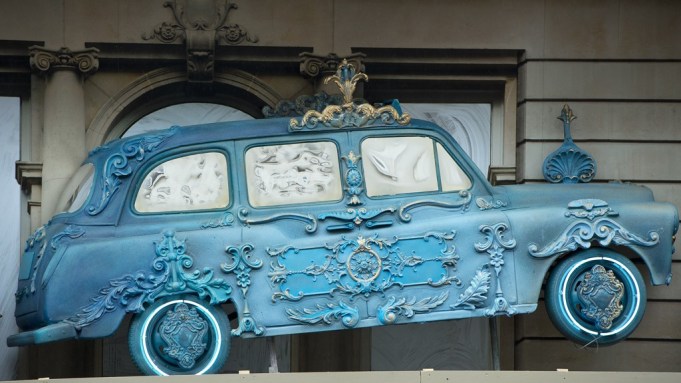 LONDON — J. Crew has drafted Shona Heath, the London-based set designer and art director, to spice up the plywood outside the brand’s soon-to-open Regent Street flagship and a J. Crew Collection store that will open in South Kensington in early November.

Heath’s Regent Street designs will be unveiled on Thursday, and feature a three-dimensional installation of life-size London taxi cabs floating above the sidewalk, and along the front and side facades of the building. Each taxi will be individually designed and decorated.

For the J. Crew Collection women’s store, which will span 3,500 square feet at 175 Draycott Avenue, Heath has created a whimsical, colorful mural called “Blossom Explosion.” The design, which will be unveiled later in August, will look as if a tree is growing up the building.

That store, in the former John Paul Gaultier space, will carry an edited selection of J. Crew and labels such as Comme des Garçons, hats by Patricia Underwood and boots by Penelope Chilvers.

J. Crew has also tapped the artist Hugo Guinness to pretty up the plywood covering 38 Lamb’s Conduit Street, where the retailer plans to open a third shop, stocking men’s wear only. That store is set to open on Oct. 10 and Guinness’ designs will be unveiled later this week.

The shop will be housed in an early 19th-century townhouse and will offer primarily shirting, with an assortment of the brand’s Ludlow suits, accessories and exclusive products from Thomas Mason, London Undercover, Han Kjobenhavn, M&P timepieces, Corgi and Begg & Co.

The 1,300-square-foot shop, in the former Bailey Clothing men’s store, will offer services such as monogramming, customized stitching and buttons and a complimentary delivery service. Going forward, the store plans to invite customers in for workshops such as how to tie a bow tie and how to take care of their shoes.

“We walked the streets of London, and we fell in love with Lamb’s Conduit Street and Brompton Cross [in South Kensington], and we think the smaller stores give a different message than a flagship,” said Drexler, pointing to the performance of the J. Crew Liquor Store in TriBeCa in New York.

“The reach and impact of that store has been extraordinary,” said Drexler, adding that a store’s size doesn’t necessarily matter if the location is right.

As reported, J. Crew is breaking into the European market — from a brick-and-mortar perspective — big-time with a flagship that will open on the corner of Regent and New Burlington Streets in Mayfair in early November. The 17,000-square-foot store will stock Crewcuts, the brand’s children’s line, and have a separate men’s wear entrance on Regent Street.

J. Crew is planning to celebrate all three openings with a movable feast on Oct. 30. The current plan is to kick off festivities with an event at the South Kensington store, followed by one at the Lamb’s Conduit Street unit. The evening will culminate with a party on Regent Street.