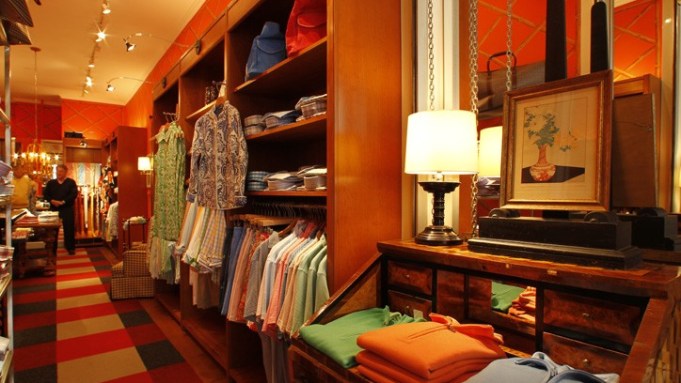 Don’t be fooled by the laid-back, prepped-out, country club aura of the brand — J. McLaughlin is a business on the move.

As other retailers cut capital investment for expansion, J. McLaughlin is stepping it up dramatically. The retailer on Monday opened men’s and women’s stores in Manhattan on Lexington Avenue between 72nd and 73rd streets, remodeled its Madison Avenue store between 92nd and 93rd Streets in time for Fashion’s Night Out, and opened its first Brooklyn unit this summer. Seven other locations were launched between this year and last. There’s also a 5,500-square-foot format in Westport, Conn., opening in October. The larger store poses challenges to broaden the selection and test new categories, and represents a quantum leap from the 420- to 1,200-square-foot boutiques the 44-unit chain typically operates.

Now the brothers who founded the business, Jay and Kevin McLaughlin, hear the cry of the West. “There are many opportunities to go beyond the East Coast,” said Jay McLaughlin, the chief merchandising officer. “Landlords have been appropriately softened up.”

“We could open 300 locations,” added Steven Siegler, J. McLaughlin’s president and chief executive officer, who was recruited seven years ago to help grow and manage the business and shares in the ownership. “The American lifestyle that we represent is very much sought after and emulated.” All stores, save two in the St. Louis and Chicago areas, are on the East Coast.

The McLaughlins’ elevated profile and pumped-up store program is raising speculation about selling the business or seeking outside investment to further the growth. When asked about the possibility of an ownership change, Kevin McLaughlin, chief creative officer, suggests he’s ready for a lifestyle change: “We are Baby Boomers growing older.” He’s 59, while Jay is 60. And Siegler added further fuel to the speculation by saying, “It’s premature to comment” on such matters.

According to the brothers, J. McLaughlin is a $30 million, vertically structured specialty retailer with little debt on its books, and a high expense structure because of its design and development processes. Yet the owners say it yields 10 percent pre-tax profit annually. There are 250 employees, including 45 in its headquarters. As a small company with room to grow and a clear brand identity, there’s potentially investment appeal, even if the collection itself doesn’t rock the industry.

The McLaughlins, native New Yorkers who shopped Brooks Brothers for blue blazers as school kids, opened their first store 32 years ago on 74th Street and Third Avenue on Manhattan’s Upper East Side, when Kevin, who worked for a men’s haberdasher, and Jay, who was restoring brownstones in Brooklyn, saw Upper East Siders hard-pressed to find traditional weekend attire. Bell-bottoms and army fatigues were the rage then. The store eventually moved to larger quarters at Madison Avenue and, in 1986, the brothers raised their stake in the neighborhood by opening the Island restaurant on the same block.

By and large, they’ve kept the J. McLaughlin stores quaint, like with the new 420-square-foot shop between Montague and Remsen streets in Brooklyn Heights. Despite the tight space, the site packs in many of the grosgrain ribbon belts, hand-quilted jackets, bright prints, five-fold handmade silk ties and colorful Catalina T-shirts that establish the signature look, and the shop design reflects the historical brownstone character of the community, with cherry cabinets that match the burgundy storefront, bright orange walls, plaid carpeting, chinoiserie pieces and antique inlaid furniture.

“We have a slightly left-handed approach to location,” Kevin McLaughlin said. “Because a store might be a little bit off, it feels a little bit special. Small really works for us. We are able to get a lot of product into a location. We purposely avoid cookie cutter. We customize each boutique to reflect the community it’s in.” Resort communities also work for the brand, places like Vero Beach, Fla., or the Hamptons, where there’s not a lot of competition.

Their following is “cultlike,” the McLaughlins say, which translates to a small clientele that’s very loyal to the label in part because it’s not on everybody’s radar and partly because it’s more timeless than fashion-forward.

About 70 percent of the volume is women’s; 30 percent, men’s. Some 40 percent of the product is domestically produced at the McLaughlin’s 40,000-square-foot factory in Greenpoint, Brooklyn, which generates 2,400 styles a year, mostly cut and sewn garments. The facility houses the administrative offices, a photo studio, the print library, a fabric warehouse, and operations for product development, design, merchandising, merchandise planning, IT and distribution. The rest of the product is manufactured in Europe and Asia. The factory has the capacity to triple its volume output, Siegler said. There’s also the advantage of filling reorders quickly. “We can make something in three weeks on a reorder. From design to delivery, it’s five months,” Jay said. “We are a simple operation, but we are capable of doing anything from conceiving the product to wrapping the gift box.”

The business is based on an array of items, rather than being collection-based. There are no licenses, no fragrance and the stores stage just two major sales a year, in June and after Christmas. “All we do is retailing in the classic sense. We make product, mark it up and sell it to a full-price customer,” Kevin said. “ As far as image, it’s “edgy prep,” he added. “We make a nod to fashion without having to be tied to it. We’ve been selling the same corduroy pants for 30 years. That makes people very loyal, but sometimes we will challenge them with something they don’t expect,” such as the fur vest with paisley print lining that he holds up.

But the big surprise will be in Westport. At almost five times the size of a typical J. McLaughlin unit, the store represents a new format that will showcase a broader selection with more styles and colors. Also being considered are about a dozen merchandise vignettes that will change each season, such as a Christmas shop, a garden shop, an equestrian-themed shop, or those for home products and antiques.

The McLaughlins had a store on Main Street in Westport for 25 years until about a year-and-a-half ago when they decided not to renew the lease and saw business declining as the town’s flavor shifted from home grown retail to national chains. However, “the recession has brought about real estate opportunities,” said Jay, noting the new Westport site, the former Heyday supermarket at 1026 Post Road, which resembles a barn, dropped 25 to 30 percent in rent over the last few years.

“We might be selling antiques, some home-related products and possibly put in a swim shop and children’s wear in a bigger way. We have talked subtly about possibly selling some food-related items, and using our restaurant capabilities to create some specific things,” said Jay. “This is a difficult store to design, but the perfect way to showcase the brand as a lifestyle brand with an expanded selection over time. It’s an experiment, but it’s where we see the brand going forward.”