The J.McLaughlin pop-up at Holt Renfrew in the Square One Shopping Centre in Toronto.

For J.McLaughlin, it’s been “steady as she goes” on the retail front, averaging 10 to 12 openings annually in the U.S. for a decade.

But recently the classic all-American brand eased into the international arena with its first two pop-ups, inside Holt Renfrew in Canada, in the Square One Shopping Centre in Toronto and in Calgary. They’re men’s only, 160-square-foot summer pop-ups that will stay open through August.

“This is such a great way to put our toe in the water and test these concepts with a fantastic partner,” said Mary Ellen Coyne, chief executive officer of J.McLaughlin.

Aside from pop-ups, different resort destinations and lifestyle centers are being targeted, and even Asia is a consideration, as J.McLaughlin seeks new markets. Executives said the 140-unit J.McLaughlin chain hasn’t yet set a specific cap on how many stores could operate. It’s a relatively small national chain that while growing, strives to maintain its neighborhood-like, quaint character, and never gets cookie-cutter.

Regular stores set to open this year include Essex, Conn., on May 17; Sun Valley, Idaho in June; Maui, Hawaii in July; Hanover, N.H., in August, and Phoenix, in September. A store in Manalapan, Fla., opened last month, and a store in Providence was relocated and updated.

J.McLaughlin shops are generally found in affluent resort towns and on neighborhood Main Streets, though the retail program has evolved into what Coyne called “a diverse strategy to deepen and expand our commitment to an exceptional in-store experience.”

“There is a lot happening. We are always looking at opportunities,” said Kevin McLaughlin, chief creative officer and cofounder of the 42-year-old brand, along with his brother Jay, who is retired from the business. It’s been owned by the Brentwood Associates private equity firm since November 2015.

In New York, “We’re doing a major renovation of our Madison Avenue flagship,” by 92nd Street. The 25-year-old, two-level, 2,000-square-foot store will shut down from June through September. “It needs a facelift. It will still be classic, but a bit more contemporary than we have traditionally been,” said McLaughlin. “This urban spot requires our highest level of sophistication.

“What’s apparent is there is a place for brick-and-mortar,” McLaughlin said. “The experience we have in our stores is very hard to duplicate in any other way,” meaning online or in catalogues. “Customers want to shop, so we are committed to continuing this expansion. Many of our new stores are in new markets, like Sun Valley, which is a ski resort town. Then we have a location going in Hawaii. That one could [lead to] multiple locations. It really opens the door for the Asian market.”

North and South Carolina have been strong markets for J.McLaughlin, particularly Bluffton, Charleston and Charlotte, and Columbia, S.C., is being eyed for a store. J.McLaughlin’s paisleys, bright “sunshiny” resort dresses and other classic styles go over big in the South, though the collection has been evolving with the addition of certain contemporary styles such as distressed jeans and short, fitted leather jackets. “We feel there is an explosion of population and interest there,” in the Carolinas, he said.

“We are open to new and interesting concepts,” Coyne said. “We love the lifestyle idea,” where centers strive to keep people on the premises for much of the day by offering an array of restaurants, cafés, spas, exercise centers, activities, events and other forms of entertainment, on a scale much smaller than a mall.

“We’re not looking to enter malls,” Coyne added, noting that the company has only three shops in malls, in Palm Beach Gardens, Fla.; The Somerset Collection in Troy, Mich., and The Galleria in Edina, Minn.

“Our decisions are really not demographically driven. They are quite nuanced,” McLaughlin added. “The experience of entertainment and food converging in a much smaller setting can be very appropriate for us. In Lexington, Kentucky, we have a great store in a relatively new lifestyle center,” The Summit at Fritz Farm. “It’s sort of like the village green of the 21st century. We just try to weave ourselves into the fabrics of our customers’ lives and commerce follows. Brick-and-mortar has been working for us.”

The Holt Renfrew collaboration, aside from being J.McLaughlin’s first pop-ups, also marks McLaughlin’s first men’s-only concept. They’re also the brand’s only international channel, albeit on a small, temporary scale. Decades ago, J.McLaughlin had a licensing arrangement in Japan with Sanyo involving shop-in-shops. It was eventually discontinued. 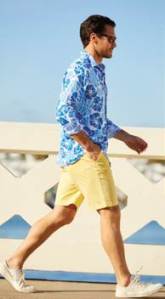 With beachy wicker furniture and rattan accents, the summer pop-ups inside Holt Renfrew are merchandised with colorful linen shirts and pants, navy and white batik patterns and novelty swimwear.

The pop-up idea didn’t just pop out of nowhere. J.McLaughlin already has a significant business with Canadians who vacation or snowbird in the U.S., in such locations as Palm Beach and Nantucket. Also, the company sponsors a polo event in the Windsor seaside development in Vero Beach, Fla., founded in 1989 by the Weston family which owns Holt Renfrew. And Holt Renfrew president Mario Grauso, who has a house in the Hamptons on Long Island, has visited the J. McLaughlin shop in Bridgehampton. J.McLaughlin, said Grauso, is “part of our ongoing pop up and experience strategy, and for our men’s customers, it’s a new option for their summer wardrobes.” Pop ups and “activations” have become priorities at Holt Renfrew, occupying 10 percent of the chain’s square footage on an ongoing basis.

“We think this is good way to test the market in Canada,” said Coyne. “If there is a strong response we would want to do women’s as well. We will have a very quick read to see if want to expand in Canada.”

Sometimes pop ups lead to wholesaling, but Coyne downplayed the possibility. “Right now, our thought is not for wholesale. We have a lot of exciting things going on in the retail front.” 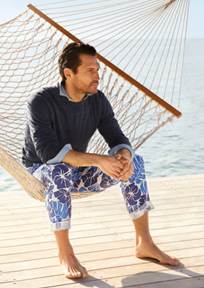