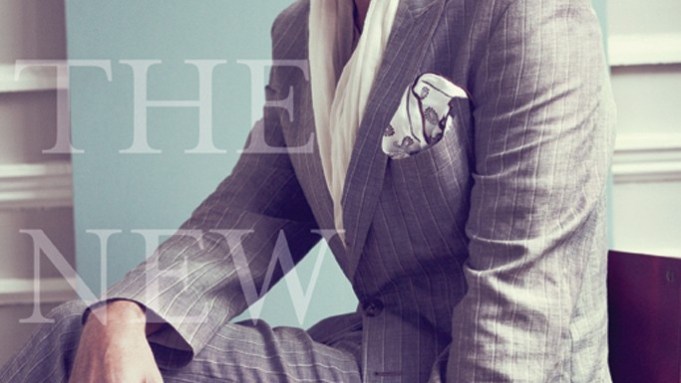 The owner of the Joseph Abboud and Joe by Joseph Abboud brands is expanding its reach through several key licenses, marketing initiatives and technological advances. This includes an iPad application for made-to-measure suits with Nordstrom, extensions of partnerships with PVH Corp. and Peerless and the introduction of a men’s jewelry collection with Aston Luxury Group.

The backdrop for all of this is the company’s Made in the New America advertising campaign that speaks to the company’s U.S. roots. The campaign is running in major men’s magazines including Esquire, GQ and Out.

“We are reinventing the brand and propelling it forward,” said Kenton Selvey, president of Joseph Abboud Brands Group. “We are proud that we are becoming an innovator again. And the American part of who we are is becoming more important.”

He said company research has shown that 60 percent of American men prefer to buy American suits, “so we need to let a few more guys know we’re made in America.”

The Joseph Abboud Collection product is manufactured in the company’s factory in New Bedford, Mass. That plant produces 950 suits a day and can turn out a stock suit in three-and-a-half weeks and a made-to-measure garment in two weeks, according to president and chief executive officer Tony Sapienza.

Last month, the company introduced an exclusive iPad application for made-to-measure with Nordstrom that allows customers in the store to browse through a wide array of styles and fabrics to create a customized garment. Selvey said it results in a “collaborative customer experience,” that keeps shoppers on the sales floor instead of tucked into a corner somewhere poring over books of fabric swatches.

“We’re looking at comp growth of 25 percent in our stock orders,” said Sapienza. “And we’ve doubled our made-to-measure business over the last 12 months. With the iPad application, we think that will double again.”

Sapienza said there are no immediate plans to offer the application to other retailers at this point.

At the same time, company executives denied the persistent rumors that J.W. Childs Associates, JA’s principal owners, is still shopping for a new owner for the label.

“We are not for sale,” said Sapienza. “We’ve taken the position with our owners that strength and consistency are very important for the long-term future of the company.” So rather than actively pursuing a sale, the owners are “making an investment” by supporting creative director Bernardo Rojo and the company’s growth initiatives. Sapienza said a sale may happen at some point down the road, but the executive team is instead focusing on building the brand today. “We have the opportunity to come out of this long recessionary period and be more valuable in the future,” Sapienza said.

“For us, it’s all about being an American designer brand,” said Selvey. “The people we compete against are different — they’re preppie, static and large. We’re constantly evolving.”

A key part of that evolution was the appointment of Rojo as creative director in May 2010. A one-time designer for Michael Kors, Izod furnishings, Perry Ellis International and Alfred Dunhill, he has put his own mark on the brand while at the same time maintaining a healthy respect for the past. The label was launched in 1987 by designer Joseph Abboud and changed hands a couple of times before J.W. Childs purchased the trademarks in 2004.

“Bernardo is the new face of the brand,” Selvey said of the designer, who made his runway debut for the label in February.

Under Rojo’s supervision, the label has achieved a new level of modern sophistication with the fall collection inspired by mid-Thirties America.

To further increase the brand’s reach, JA extended its existing licensing agreement with PVH for an additional 10 years under which PVH will produce dress shirts, neckwear, loungewear and underwear under the Joseph Abboud label. In addition, the company’s licensing deal with Peerless has been extended another six years. Peerless currently manufactures tailored clothing under the Joseph Abboud White Label and will now produce Joseph Abboud Collection outerwear, rainwear, boys’ clothing and dress furnishings as well.

The final license allows the company to expand into a new product category — men’s jewelry. Aston Luxury Group has acquired the rights to produce a broad assortment of products under the Joseph Abboud by REVV name. The company has already offered cuff links and also has a watch license with Genesis, but the offering will be expanded to items such as tie bars, key chains, bracelets and necklaces. “The aesthetics will be very simple and refined,” said Rojo. “We’re going to play with different materials, but they will be timeless and sophisticated.”

The executives said they expect to continue to be a presence during Fashion Week in New York and they are working on “new, unique and artistic ways to show the collection” in September. “We will continue to do runway shows from time to time,” said Selvey, “but we want the editors to come and be surprised.”