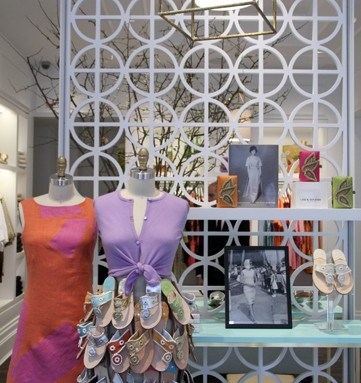 NEW YORK — For six decades, the Navajo sandal has been the mark of Jack Rogers footwear. Now a casual chic collection inspired by the singular look is emerging, and the progress is most visible on Madison Avenue here between 87th and 88th Streets, where the first Jack Rogers store gets christened with a party tonight.

“We want to become a lifestyle brand,” said William Smith, chairman of Jack Rogers and managing partner of Global Reach Capital, during a visit to the 1,240-square-foot space.

The classic sandal has been interpreted into a full line of footwear with more than 100 stockkeeping units, including closed-toe shoes, ballet flats, moccasins, high-wedged espadrilles, pumps, heels, shoes with Swarovski Elements micro beads, with monograms, in glazed suede or distressed leather, and even a rain boot for fall with a side zipper. The footwear is complemented by a smattering of handbags, clutches, dresses, sweaters, caftans, swim suits and sarongs, straw hats and bags, jewelry, ties and pocket squares.

Girls footwear and dresses are also offered as well as Sister Parish small trays and dishes; two candles — the Artemis and the Merriweather, and a few books, including “Jacqueline Kennedy: The White House Years.” The average price is just less than $200, with women’s footwear priced $68 to $218; ready-to-wear, $88 to $458; handbags and small leather goods, $48 to $325, and jewelry, $115 to $525.

“An entire handbag line, that’s my next big project,” noted Rachel Barnett, the chief operating officer of Jack Rogers, underscoring that the assortment is in its early stages. After handbags, apparel gets fueled.

In November 2008, Global Reach, along with investors Northwood Ventures, Richard Mishaan and Christopher Burch, purchased the brand from JMR Management, and not long after, got the product development process in gear. “There still is a lot of work to be done,’’ Smith said, though after a year of growing footwear, volume has doubled, he said, while the rtw and home items are just being introduced with the store opening. Smith declined to specify revenues or the store’s volume projection. Sources said Jack Rogers generated around $20 million last year.

No additional Jack Rogers lease signings are imminent, but the Hamptons, Palm Beach, Nantucket and Bal Harbour are logical destinations considering the sandals are as ubiquitous as polo shirts and tennis skirts in such resort areas. In the meantime, the Madison Avenue store serves as the showcase to support wholesaling, as will a Web site, which is also launching this week.

Lauren DuPont, the brand’s creative director, said the design focus is on color, whimsy, living the resort life and a Jackie O sensibility. The fashion icon was often seen wearing the sandals in the Sixties, as did Talitha Getty. For traveling, “You can buy everything you need, from supercasual styles to something for your night out,” DuPont added. There’s also a cross-generational, upscale appeal.

In the front of the store, there’s a mannequin in a dress, a table of shoes, ties and pocket squares, some books evoking past eras and travel, serving as a sampling of the collection ahead. The store’s virtually all-white interior is a contrast to the black-oak floors, and the products and their colorful character. Accessories are displayed on upper shelves, atop cabinets with a custom-made lighting system integrated into the front edges. The cabinet system is adjustable and can accommodate folded and hanging merchandise and the upcoming larger assortment.

Perhaps the most distinguishing feature are Moroccan-styled wood screens, in the windows and on the selling floor, creating a mystique so visitors are encouraged to see what’s just beyond the partitions. “It’s really architectural lingerie,” said Dag Folger, managing director of a+i design, which created the store. “It hints but doesn’t give it fully away.” With Jack Rogers expanding beyond shoes, “We wanted the store not to be a one-liner,” Folger said. We wanted it be layered.”