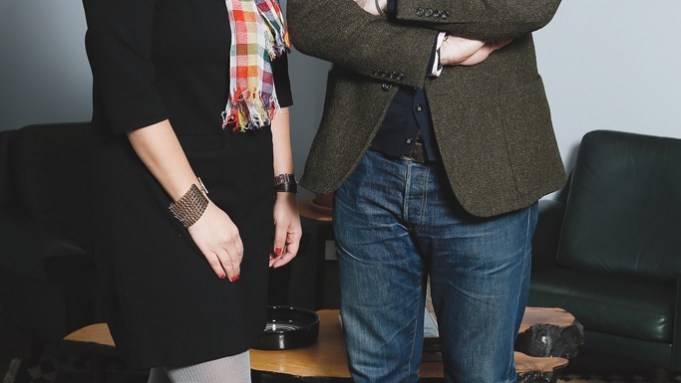 Kate Spade’s little brother, Jack Spade, is getting ready to bust out of his sister’s shadow.

Founded in 1996, Jack Spade began selling men’s messenger bags made from waxed cotton and heavy canvas. Durability and function were the focus for cofounders Andy and Kate Spade, who opened their first Jack Spade store at 56 Greene Street in New York’s SoHo in 1999.

Under Fifth & Pacific, Jack Spade has begun to spread its wings and is now poised for broader expansion. Although management would not disclose a precise volume breakdown, Fifth & Pacific’s ceo William L.  McComb said on an earnings call last year that Jack Spade “can be a $100 million men’s business with very high margins.”

According to Melissa Xides, Jack Spade’s vice president of global sales and retail, the company decided to invest heavily in the brand last year, as it moves closer to attaining lifestyle brand status.

That investment has taken the form of store expansion. In a year, Jack Spade grew from three units to 10 stores. With two doors in New York and a store apiece in Boston, Washington D.C., Chicago, Los Angeles, Portland, London, Tokyo and New Canaan, Conn., Jack Spade is readying for its next boutique in Atlanta in March. The brand is also sold in 200 specialty boutiques and department stores, including Barneys, Bloomingdale’s and Nordstrom.

Those numbers are expected to rise, as the retailer sets its sights on domestic and international markets, notably China, said vice president and brand director Cuan Hanly.

Driving that growth is demand for Jack Spade’s classic-yet-hip clothing and colorfully accented bags, which target the “creative class,” said Hanly. To elucidate whom that includes, he pointed to professionals ranging from artists and graphic designers to architects and journalists.

“We’re going for simplicity and function, that’s our design philosophy,” Hanly offered. “It’s classic, American men’s wear, but we bring color and humor to it.”

With a tongue-in-cheek blog blending pop culture, art, music and films that influence the brand, Jack Spade reaches out to its consumer base on a more personal level. The platform seems to be working, as its sales are spread evenly between e-commerce, its wholesale channel and its retail channel, Xides said.

To further strengthen the digital side of the business, Jack Spade is “re-platforming” the Web site by the end of April, Xides noted, explaining that the site will include a social feed component. This new element will add more cohesion to the brand’s Twitter, Facebook and Instagram following.

“It’s about engagement,” Hanly added. “It’s not just about the product.”

But the product is at the heart of the endeavor, and Jack Spade has managed to come into its own, offering outerwear, apparel and accessories. The brand recently added denim, and it sells footwear through a third party. Currently, 35 percent of its sales comes from bags, another 35 percent comes from outerwear, and the remaining 30 percent is made up of small leather goods and other categories.

Next, the brand is venturing into watches, which will hit the market on March 7. Timepieces will range from $95 to $500 and include a variety of case shapes and materials. The lower-priced watches for $95 incorporate Japanese movements, round cases and color-blocked or patterned rubber straps. Nylon straps are also offered.

The higher-priced timepieces, which start at $295, employ sapphire crystal and Swiss movements. This collection has a variety of case shapes, from round and pillow to tank and square. It also has a sporty pilot’s model that has four hands, allowing timekeeping of two time zones simultaneously. Straps are leather, stainless steel or gold-brushed stainless steel.

“There’s a lot of bling in the marketplace at the moment,” Hanly said, as he flashed his own Jack Spade watch. “I just feel like that’s starting to get a little tired.”

Moving forward, Jack Spade aims to cycle in more categories as it rounds out its collection.

“We’re very collaborative here,” Hanly said. “I firmly believe that no idea is a bad idea, and we try to engender that in our teams.”

“There are some bad ideas,” Xides piped in, “and I’m not afraid to tell them.”