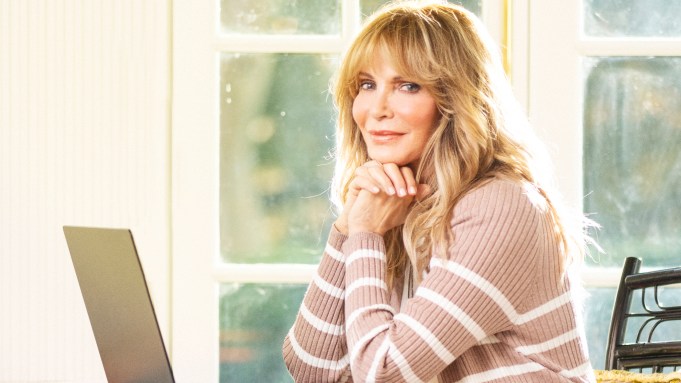 Jaclyn Smith has parted ways with Kmart, but her fashion collection is being rebirthed for a fall/holiday 2022 launch through a licensing agreement with RDG Global LLC, WWD has learned.

“I can’t wait for women to see the clothes,” Smith said in an interview. “They’re very modern yet timely and timeless. That doesn’t mean old-fashioned by any means. I love classic, but we are right on trend with what’s out there.”

The collection includes women’s sportswear, sweaters, loungewear, sleepwear, outerwear, cold weather accessories and denim, in plus and regular sizes. With about 60 pieces, including roll sleeve blouses, faux fur jackets and crocodile-embossed faux leather skirts, the collection will have “wardrobe builders at value prices,” as well as more fashionable pieces at higher prices.

“It’s for women who need to go to a million different places, women of all sizes and shapes,” Smith said, emphasizing versatility and inclusiveness. “One of the hallmarks of my apparel has been fit. I have a very diverse customer, from all walks of life.” Women age 35 and older are targeted.

It’s a new chapter for Jaclyn Smith and her enduring women’s collection, just as Kmart winds down, closing stores in what’s been a sad, slow disappearing act from the retail landscape. The chain is down to about half a dozen locations, from nearly 2,500 in the mid-’90s. One factor that kept Kmart going — despite bankruptcy, mismanagement, ownership changes and competition the company didn’t see coming — was the Jaclyn Smith brand and the customer loyalty it engendered since debuting 36 years ago. In its peak years, the collection encompassed women’s apparel, accessories, intimate apparel, footwear, seasonal gifts, bedding, tabletop, decor and furniture, and generated $250 million to $300 million in sales, sources said.

“Back then there was no social media and no fashion in the mass market. I launched with store appearances, print ads and television, which gave me a strong footing with my customers. They could meet me and ask questions. I was visiting a different store and city every other weekend and doing talk shows. They were short trips, because I had young children.”

Now, it’s all about social media.

“Certainly my career brought the customers to Kmart but what made them come back to the store was the product,” said Smith. “My dream was to build something that would stand the test of time, to build a quality brand at an accessible price. It is still my philosophy.”

RDG, a major private label supplier to retailers that is located at 550 Seventh Avenue in Manhattan’s Garment District, is getting its showroom ready for retailers to view the new collection in mid-February. RDG does the design, sourcing, manufacturing, sales and distribution, and provides photos and other assets.

Executives involved in the project said the collection could sit at such retailers as Kohl’s, QVC, TJ Maxx, Burlington, Amazon or Costco, and that a mid-tier department store could sell the Jaclyn Smith Collection products, but the distribution is to be determined. They are considering offering one major retailer the exclusive on the collection, though it’s possible it gets pick up by more than one retailer.

Precise pricing hasn’t been set yet and would depend on the retailer, margin objective and material and shipping costs, which have been rising significantly due to COVID-19.

Smith became an overnight icon by playing Kelly Garrett on the “Charlie’s Angels” television series which ran from 1976 to 1981. The other two Angels were played by Farah Fawcett and Kate Jackson, but Smith was the only one of the original three Angels to stay with the series for its entire run. Smith starred in several movies and had cameo parts in two of the three “Charlie’s Angels” movies.

After the series, which is still seen in reruns, ended, Kmart approached her. “At the time I thought Kmart wasn’t the place for fashion, and I was under contract with Max Factor” which discouraged her from Kmart’s offer. After she balked, Kmart persisted, and encouraged her to look at Kmart’s Hunter’s Glen line. “It was reminiscent of Ralph Lauren — collegiate, tailored, at a price point I couldn’t believe,” Smith recalled. “So I thought about Kmart some more, that it would be challenging, and decided to take it on, against a lot of people saying don’t do it. But it was one of the wisest decisions I made. It was an education. It challenged me in ways that taught me so much…I had a dad that encouraged me to think ahead, invest and always have backup plans. This was certainly my backup plan.”

Jaclyn Smith at Kmart was introduced to the media and the world in 1985 and is still considered the most enduring celebrity collection — though not the first. Supermodel Cheryl Tiegs launched a collection with Sears in 1981, and the concept can be traced at least back to the early 1900s when dancer and silent movie star Irene Castle had a fashion line.

Smith’s contract with Kmart expired at the end of July 2021. There’s a yearlong sell-off period, so some pieces can still be found.

Smith said she’s very sad about the collapse of Kmart. “Kmart is part of my history. But you know retail is a moving target, there is competition.” At Kmart, “There was just this constant coming and going of CEOs and people. You still have to put a constant flow of merchandise out there. For however the company was being run, it went more to hardlines and wasn’t concentrating so much on apparel. I know business today is hard.”

Among her favorite pieces are the faux fur jackets, soft quilted jackets with gold zipper pockets and joggers with cargo pockets. “My denim is very figure-flattering for all sizes and shapes,” she noted.

“I am working with this team that I know from my past and they are just incredible,” she said, singling out RDG president Patricia Johnson and RDG’s senior vice president of women’s design, Bruce Goldberg, both of whom formerly worked at Kmart and on the Jaclyn Smith brand. Johnson was Kmart’s divisional vice president, women’s, and Goldberg was senior director for women’s and juniors. “We have this constant dynamic exchange of ideas,” said Smith.

“There is definitely a sophistication to this line,” Smith said. “There is no need to continue what you have done unless you can enhance it, but I don’t want to put down what I did at Kmart. I am proud of what I’ve done over the years. But right now it needs to go in a new direction.”

Her company, Jaclyn Smith International, also creates wigs, skin care and fabrics. “I would love to get into home,” said Smith. “I love architecture, mixing periods in furniture. I have studied that over and over. With home, I would keep my same philosophy and make it available to all. I’ve been approached. I’ve been concentrating on apparel, but it could happen.”

“We did an enormous business at Kmart with Jaclyn Smith,” said Lisa Schultz, a partner at Wyse Consulting and former executive vice president of product development and design at Kmart and Sears. “Jaclyn really resonated with consumers. There had to be customers that came to Kmart just to buy Jaclyn. She is well-known, and yes her face is known. Jaclyn Smith managed to maintain a good volume despite the woes at Kmart. People haven’t been buying it because they saw her in a movie. They are buying it because they trust her. She is very authentic. We know [customers] loved the Jaclyn Smith jean and the classic white shirt and beautiful soft silky blouses. Now there’s a much more generous, luxurious cut. There’s that simplicity, beautiful prints, luxurious fabrics at a price point. Some things that have been around as staples are updated.”

“Jaclyn is very hands on in an executive way,” added Wyse. “She does it with a degree of warmth and a very respectful demeanor. She will tell you what she likes and what she doesn’t like, and why she likes or why she doesn’t like it. There is a casual and elegant California chic to her. She’ll make suggestions on something. She has the veto power over everything.”