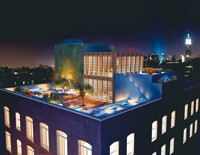 NEW YORK — Jade Jagger plans this afternoon to be zipping around the Jade, the sleek Chelsea condominium she helped design, greeting real estate brokers and showing them her chic take on compartmentalized luxe living.

Interior design is practically reflexive for Jagger and her partner, Tom Bartlett, who have teamed with Yoo creators John Hitchcox and Philippe Starck and The Copper Group on the 57-unit property at 16 West 19th Street.

Jagger, head of design for the London-based jeweler Garrard, and Bartlett designed the brand’s flagships in London, Moscow and Dubai. In addition, she has gone to great lengths decorating the London and Ibiza homes she shares with her children in an eclectic casual style.

Now that the New York apartments are on the block, the pair already is at work on a more classical property for Yoo in Vienna and another in the English countryside.

“Decorating was always one of my first expressions,” she said. “I’m very much one of those persons who moves the furniture around in a hotel room. I’m a pathetic aesthetic.”

Although Jagger doesn’t pack up the candles for her overnight trips, she does like to use fabric — whether a sarong or blanket — to dress up a room. “Fabric always goes a long way,” she said. “I definitely carry it with me when I travel.”

A sales brochure for the Jade highlights a quote from Andy Warhol, hinting at her childhood interest in design and real estate. “My favorite Jagger is Jade. I love Mick and Bianca, but Jade’s more my speed. I taught her how to color and she taught me how to play Monopoly. I was 44 and she was four.”

For the Jade, Pods, colorful lacquered boxes that contain the kitchen, bathroom and storage space, anchor each apartment. Unopened, the Pod provides an uncluttered feel, and opened, it reminds Jagger of a beautiful jewel box.

“The beauty of it is, when you close, it is clean and finished. It’s quite a beautiful object in the center of the room,” she said. “I very much think about the person who will live there, as if it were going to be my own. The desire to create something relevant — that’s the intimacy you have with your design.”

Buyers have four Pod “palettes” to choose from — the Aristo Pod, with classically English touches; the Luxo Pod, with a jewel-like glow; the Boho Pod, with hues reminiscent of Jagger’s Ibiza getaway, and the Barocco Pod, with bold black, red and white surfaces. Studios start at $500,000 and the penthouse is the highest-priced space at $3.7 million.

Jagger has borrowed from some of the finishing touches she has used in her homes in London. With its intricate tiles, olive trees and exotic plants, the Jade’s two-tiered rooftop terrace, for example, is reminiscent of the Mediterranean garden she has in Ibiza. “The idea was to create more secluded areas and different levels of gardens.”

There is also a sundeck, outdoor soaking tubs, a reflecting pool, an indoor fitness club and a spa. The Lapis Lounge is one floor above, an entertainment room replete with Jade Jagger for Yoo furniture and a plasma-screen TV.

“Literally, it’s very much about how we live and how we encompass our lifestyles. For me, creativity has turned into lifestyle,” she said.

For strangers to get the full picture, Jade’s brochures include the names of some of her favorite boutiques, restaurants and destinations. Christian Louboutin, Skyline Books, Chelsea Flower Market, La Perla, Alexander McQueen, T Salon and T Emporium, Steak Frites, Kitchen 22 and L’Express were some that made the cut. Those who need to hear it firsthand from Jagger will be able to, thanks to a film created by Shvo that will be projected on four walls with speakers on each wall. With the life-size images of Jagger moving from wall to wall, visitors will feel as though the daughter of rock royalty is walking around them, telling it like it is.