Ciputra Artpreneur Center and its Lotte Shopping Avenue is an enormous complex, located in a prime real estate area.

By Andre Vltchek and Rossie Indira on July 1, 2014
View Slideshow 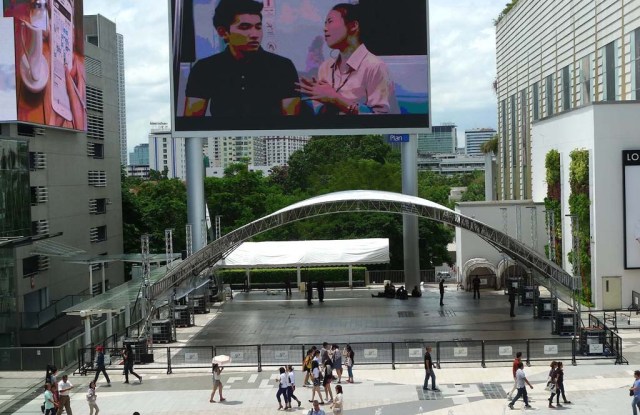 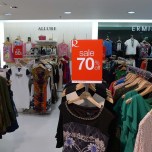 JAKARTA, Indonesia — Is it a mall with an art museum, concert hall, and a branch of the legendary Raffles Hotel occupying the top levels, or is it just Jakarta’s bold and brash answer to the Lincoln Center, with a South Korean Lotte shopping center below?

Whatever it is, it is huge. Ciputra Artpreneur Center and its Lotte Shopping Avenue is an enormous complex, located in the prime real estate area at Jl. Prof. Dr. Satrio Kav 3-5, South Jakarta.

Officially, the Lotte Shopping Avenue is a one-stop shopping mall with a total floor-space of 828,500 square feet divided into seven floors, consisting of fashion, living, culture and entertainment in each area. About 480 brands are sold.

Bernard Grover, a Texan by origin, and general manager of Ciputra Artpreneur Center, is truly passionate about his mission, which is to put Jakarta on the Asian cultural map: “I absolutely plan to bring as much art and performance here to raise awareness and add seeds to the cultural garden that is Indonesia,” he said.

He works directly for the Ciputra family, which owns the huge Ciputra Development, property companies in Indonesia, and the Ciputra Group.

“I love art, especially the works of Indonesia’s modern art master, Hendra Gunawan,” said Ciputra who, like many Indonesians, goes by only one name. “And I’m proud to be considered as the biggest collector of his works. My passion for Indonesian art development has led me to envision a center with the purpose of improving the living standard/value of Indonesian artists and the development of the Indonesian art world; the Ciputra Artpreneur Center is a realization of my long sought dream. It is the embodiment of my vision to create an incubator for Indonesian art-preneurs and a place to advocate culture, intellectuality and empowerment for our beloved country.”

The art complex is still a construction site, above an already functioning shopping mall. Once completed, the cultural center will have a 1,222-seat concert hall, an art museum and several other cultural endeavors.

Grover stands in the middle of all this, proud and excited even though he has a huge task ahead of him.

Jakarta is a city with 12 million inhabitants, but without a world-class museum, no art cinema or concert halls featuring international performers or orchestras. Most Indonesian culture has been reduced to the level of the lowest grade of pop ever since the 1965 military coup.

“Having an art and performance center above a mall presents several unique opportunities,” Grover said. “By working closely with the various retailers, we are able to present many seemingly mundane things in an artistic context, much like Andy Warhol’s Campbell Soup can. Separated from their normal contexts, everything from fashion to food takes on a new importance when the usual distractions are removed and the spectator can focus on the items at hand. Even items as seemingly unimportant as kitchen utensils suddenly take on new life when isolated from the every-day world and placed in an elegant and uncluttered space. The Ciputra Artpreneur intends to explore these types of things, as well as more traditional arts, to take full advantage of our unique position and surroundings.”

The Lotte Shopping Avenue itself offers a new concept of retail. Instead of breaking space with many separate boutiques, numerous brands offer their apparel in open shared areas. Brands range from Lacoste, Sperry, and Steve Madden to Uniqlo. There are also numerous cosmetic brands from Asia, Europe and the United States, including Kanebo, Estee Lauder and Shiseido. On the fifth floor are three luxury restaurants: The Japanese eatery Hide Yamamoto, the Chinese restaurant My Humble House and the Korean Samwon Garden. There are dozens of less-expensive food offerings throughout the mall.

There is also a Lotte Duty-Free complex on the fifth floor, with several luxury brands, such as Coach, Tumi, Chloe, Mont Blanc, Bally and Marchio.

“I like working at this store,” said Sony of the Bally store. “With this open plan arrangement, we can actually see how our competitors are doing and selling. This is good for competition and we can report to the management, and they can later think about our marketing strategy.

“Of course, as this is in a duty-free section, it is only for those who are going to leave Indonesia,” he added. “Customers have to pick up their goods at the airport before they board their plane. But to boost our sales, if a client purchases more than $1,000 worth of merchandise, there is a way to help them to actually get their goods when they are still in town.

“Apart from art, this is the only duty-free area the size of a department store anywhere in town, so the mall is already different from the city’s other malls for having one on its territory,” said Sony. “As we don’t charge the import duties on the goods that we sell here, they are cheaper than at other branded stores in other malls.

“It seems that our clients are also a bit different. You see that the concept of the stores is open plan. Like this, our visitors can communicate much more with the storekeepers. They are willing to explore, to experiment. This has resulted in more new customers.”

Not everyone is fully satisfied with the management. Outside of the duty-free area, where the open space is implemented, Patrick Lai, who is originally from Hong Kong, a manager at Uniqlo, said that he would like to see more competition among the fashion outlets.

“In my opinion, this mall does not have enough fashion stores yet to compete and to attract customers,” he said. “You know, it is always better to have more competition, as customers will have more choices and flood the place. I think our brand can compete head to head with Mango, Zara, Gap and others, so we would like to see all of them here.”

As for the customers, many are still confused. There are mostly those who either come here for the arts, or for shopping.

Atik Palwani who lives in both Bandung and Jakarta, said, “I visited this mall once before, but it was to attend my daughter-in-law’s painting exhibition. We did not do any shopping here. Next month, my youngest son, Dimas and his friends will also have their exhibition here, called ‘Handmade Movement’. They will be trying to design men’s clothing lines.

This place is all about the arts, it is so different.”

Nor is the décor of the center to everyone’s taste. The bizarre figures, like statues, shining into the night, in different colors, may seem too infantile, too pop, to serve as the exterior decoration of “the biggest cultural center” in one of the most populous cities on Earth. Some will find the combination of shopping mall, a duty-free shop, concert hall and art museum as odd. Others would describe that very new, strictly Indonesian word and concept – “Artpreneur” – as peculiar.

But in neighboring Malaysia, something similar has already been tried and has been working – at KLCC in Kuala Lumpur. There, a mall, a symphony hall, art gallery and aquarium co-exist in a huge architectural ensemble.