The door bows today at the Platform project in Culver City and, if successful, could pave the way for expansion of the concept elsewhere. 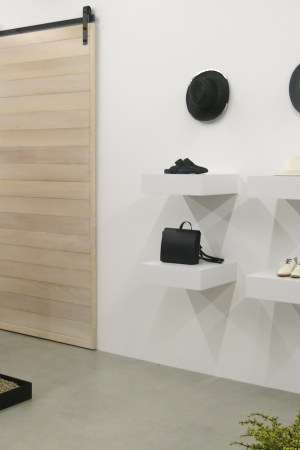 Janessa Leoné, Megan Papay and Cristina Palomo-Nelson worked well into Monday evening carefully refining the details of their new store, which opens today. Multiple trips to nearby Blue Bottle Coffee had taken place and the three were running on fumes by day’s end.

The two California brands merged their artisanal line of goods — Janessa Leoné of the carefully handcrafted hats and leather goods and Frēda Salvador with its line of shoes handmade in Spain — into a concept accessories boutique called The Edit by Frēda Salvador + Janessa Leoné.

The minimalist space with its concrete flooring, floating shelves and whitewashed wood furniture, totals about 1,000 square feet and launches at the Platform retail project in Culver City, Calif. They open their doors with an offering of their new spring collections.

It’s the first time the two brands have worked together.

“We wanted to create an experience totally focused on accessories,” Papay said. “Platform was really intriguing to us.”

She pointed to the mix of tenants and the nearby galleries as “really eclectic but cool people, unique to L.A.”

Leoné based her company — which sells its wares at Alchemy Works in Los Angeles along with Cloak + Dagger and Coop and Spree in New York among other stores — in L.A. So it only made sense her first store be local to tap into an existing customer base. “L.A.’s always been near and dear and I decided if I would ever open a store., I always knew it would be in an L.A. and it would be an extension of our identity out here,” Leoné said.

For Frēda Salvador founders Papay and Palomo-Nelson — who sell their shoes at places such as Shopbop, American Rag Cie, Azalea Boutique and Saks Fifth Avenue — the San Francisco company is now pushing into a new market. Their flagship is located on San Francisco’s Fillmore Street. Having already operated a store, they brought operational know-how to the endeavor and going south made sense and proved a natural extension for the brand, Papay said.

If the Culver City store is successful, the two businesses would consider opening additional locations.

“I think at this point everything’s worked out really well and it feels like a natural fit,” Leoné said. “We respect each other as designers. So if this is successful, which we are very confident that it will be, we’re very open to expanding this concept of having a curated, multibrand boutique that’s cobranded and not necessarily just a third-party boutique. We really like the idea of being a one-stop shop for accessories.”