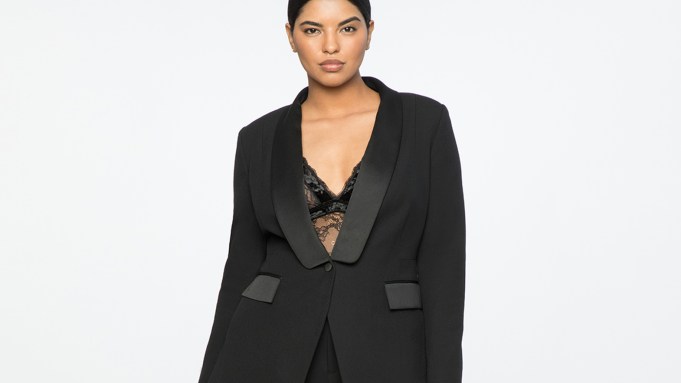 Jason Wu, the ready-to-wear designer known for his refined sensibility, has thrown himself into the plus-size arena collaborating with Eloquii on an exclusive holiday capsule collection called Jason Wu x Eloquii.

The limited-edition eveningwear capsule of 11 pieces includes dresses, luxe outerwear and separates that retail from $89.95 to $259.95. Starting today, the capsule will be sold exclusively in Eloquii’s Washington, D.C., Pentagon City store, The Shops at North Bridge in Chicago, Twelve Oaks Mall in Detroit, The Galleria Shopping Center in Houston, Miami Dadeland Mall and through eloquii.com.

As reported, Eloquii was acquired by Walmart Inc. last month and it will become part of Walmart e-commerce’s digitally native vertical brand portfolio, which includes previous acquisitions such as Modcloth, Bonobos and Allswell, which are led by Andy Dunn, senior vice president of digital consumer brands at Walmart U.S. e-commerce.

Eloquii was shuttered in 2013 by the Limited, and customers demanded it reopen and it did, led by a handful of original creators. Eloquii claims to be obsessed with fit; its technical fit team is as big as its design team. Eloquii’s fashion, which begins at size 14, is squarely focused on the $21 billion plus-size market.

“For the first capsule collection, I wanted to do something that was very DNA Jason Wu,” said the designer, in an interview. “I concentrated around a cocktail capsule. Glamorous, special moments is what people think of when they think of Jason Wu.” He said since the collection ships for the holiday season, “I wanted to have a collection that was quite glamorous and fun, and very sophisticated.” Inspired by the opulence of the Fifties, stand-out pieces in the Jason Wu x Eloquii capsule include the tuxedo coat ($260), the embellished asymmetric A-line dress ($190), one-shoulder, wrap skirt sheath dress ($129) and the crepe-back satin tuxedo jacket ($120) with coordinating pants ($90).

Wu has designed some plus pieces before for his collection for 11 Honoré, but this is the first time he’s done a complete plus-size capsule. The way the partnership came together is that Wu is close friends with John Auerbach, who’s on the Eloquii board and they were discussing future collaborations. “I knew about it, and I thought, ‘Why not?’ I was excited about trying something new.”

With the plus-size market gaining a lot more attention lately, a lot of designers are trying their hand at it, said Wu. “It’s a natural evolution of the way fashion is right now. Two or three years ago, it was much more unheard of for designers to do a plus collaboration. People are much more open to the idea. I think as designers, it’s important to evolve with the market and to address a market that isn’t being spoken to,” he said.

Jodi Arnold, cofounder and creative director of Eloquii, said they were excited to work with Wu, and he was the retailer’s “dream collaborator.”

“We really loved him for his polished and feminine aesthetic which really resonated with our customer, and he happened to be friends with our chairman, John Auerbach,” said Arnold. “John set up a discussion. Jason was really excited to do it and was really all in, and it’s been a really seamless, easy collection for us.”

Arnold said it was great working with Wu “because he’s such a craftsman. He loves creating beautiful clothes inside and out.” She said she enjoyed watching him re-create things with some of the details he’s had on his designer runway and create them for this customer. “There are lot of similar things. He’s done them in a way that really is flattering to the figure. He came to the fittings and we learned a lot from him in terms of what he likes and the construction and the way he does things,” said Arnold.

Arnold said that she has found for the Eloquii customer that finding clothes to go to an event is really hard, especially around the holidays. “She could find things that are more matronly or very young, but to find contemporary holiday attire was always tough. We’ve been successful with holiday dressing,” she said. She said Eloquii has a black-tie collection, and they added to it. “There’s an opera coat, pants and mostly dresses, fit and flare shift dresses, very sophisticated sheath dresses as well as body-conscious sequin dresses.”

Discussing what he had in mind when designing for the plus-size woman, Wu said, “I think for the plus market, she wants to look beautiful, just like any woman. I think the idea of providing her with fashion that is elevated, that regular sizing has had forever is exciting. I feel like it’s not something she’s had before. There’s the design elevation aspect of it. That’s what I really wanted to offer her — a really elevated, designed collection that felt every bit as chic as anything you can find on the regular designer floors.”

For the holiday capsule, Wu kept the color palette to black, white and red, “three colors that I really love and I used throughout my career.

“The inspiration really came from the Fifties. That’s been a source of inspiration throughout my entire career. In the Fifties, more voluptuous women were really celebrated. I thought that was a really good reference for this collection. I wanted to celebrate the feminine form. The signature dress of the collection is a long-sleeve black sheath,” he said.

Keeping prices affordable was a key motivator. “It’s really about providing fashion for a market that’s never really had fashion in a very long time,” said Wu. “I was particularly excited that we were able to bring this super fine, elevated design language at a price that’s very affordable at the same time.”

Sticking to the price parameters didn’t pose a problem. “I think it’s about being very clever and being intelligent about how to design within the price point. We’ve kept it very simple and let the shapes speak for themselves,” said Wu. For example, he pointed to a “gorgeous, one-shoulder black sequin gown for $200. That’s something that every girl would love in her closet,” said Wu.

According to Wu, the way they collaborated was he designed all the styles himself, and they did the fittings together. “I was very hands-on throughout the process. We did it no differently than how I would produce a Jason Wu collection,” he said. The capsule was manufactured in Asia.

Asked if there were any special design features he considered when creating the line for a plus-size woman, he said, “Construction wise, there’s definitely seaming that is different and waist placements. What we found was she really wants to be very sensual. She wants to show her body. She wasn’t interested in oversize clothes. It’s a collection that embraces body and shape. We designed a collection to show the feminine form, and that’s what I found was super important. I was getting feedback from the fit models and working with the Eloquii team,” he said.

Since it’s a direct-to-consumer collection, Wu was asked how they determined how much to produce.

“It’s a limited edition, so once it’s gone, it’s gone,” said Wu. “Hopefully it will be gone right away.”

Wu said they’re considering continuing the partnership into spring: “We’re talking about it right now.” He said the beauty of Eloquii is it’s a direct-to-consumer platform. “We’re able to be so much more flexible in terms of timing and what we want to do. And be able to react really quickly. That’s another aspect I’m excited about. Eloquii is part of this class of digitally minded fashion companies that are really breaking all the rules. That’s really exciting because we don’t have to stay with the traditional fashion calendar. You can do this special little capsule that drops in November and goes straight to the consumer. I think it’s just a very modern way of thinking about fashion in general,” he said.

Launching in tandem with the collection is a campaign video directed by Vincent Peone. It features Wu and model and body activist Paloma Elsesser out on the town.

Wu, who’s been in business 11 years, has been busy on several fronts. In addition to his Eloquii partnership, he unveiled a lingerie and bodywear partnership with Real Underwear in June, and launched a limited-edition scented doll with Net-a-porter in August. He’s also planning to open a store in Shanghai next year. InterLuxe, the investment firm backed by Lee Equity and chaired by Gary Wassner of Hilldun Corp., acquired a majority stake in Wu’s business in 2014.