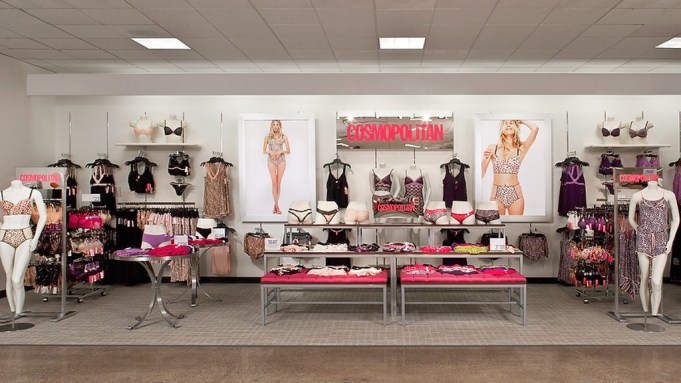 J.C. Penney has another wave of shops in the works to reinvent its selling floors, WWD has learned.

Maidenform and Vanity Fair are already mainstays at Penney’s and other retailers, but Penney’s said it’s remerchandising the two brands with greater scope and sophistication and working closer with the vendors.

In kids’, Carter’s will be opening shops inside Penney’s, as will Giggle, a retailer of children’s products under its own label and those of other suppliers. Giggle Baby shops will be exclusive to Penney’s, featuring its products and an assortment from other brands.

Also, Cynthia Rowley and Tori Spelling have exclusive collections for Penney’s. Rowley has created the DreamPop children’s label for Penney’s, and Spelling will sell her Little Maven label. Penney’s said both will be merchandised to stand out, but without their own shops.

As previously reported, shops for Liz Claiborne, Izod and the jcp private brand will be rolled out starting in September, while shops for Levi’s, Arizona Jean Co. and I Jeans by Buffalo surfaced across the department-store chain last month. Joe Fresh shops across the chain are planned as well.

Penney’s reinvention in large part entails recasting selling floors from an open sea of racks into a more compelling shop-in-shop format and shifting to everyday low pricing and clearances instead of high-low pricing, sales and coupons. Internally, Penney’s has designated three types of in-store spaces: “stores” of at least 1,500 square feet, “shops” at around 500 square feet and “boutiques” under 500 square feet. Each space could either carry a single brand or merchandise a classification with several brands. Ultimately, Penney’s plans to be entirely merchandised by shops that will be tied together by a main aisle, called the Street, to guide shoppers past the men’s, women’s, kids’ and home shops and serve up amenities, activities and food stops like cafés and juice bars.

For its reinvention, Penney’s has cast a wide net to swoop up brands not previously sold at the store. It’s also culling out brands on the matrix that have not performed, particularly certain private labels such as Ambrielle intimate apparel, which is being discontinued. Of the 400 to 500 brands at Penney’s, roughly half will be phased out, but others will be enhanced via in-store shops.

Penney’s kids’ department will undergo a two-month transformation beginning next June, which is expected to be completed in time for the 2013 back-to-school season, according to Betsy Schumacher, senior vice president and general merchandise manager for children’s. “We can build these shops fairly quickly,” she said. “We’re taking the taste level up so it feels alive and fun. What we are trying to do is give both moms and their kids a great experience with a fun environment that’s easy to shop, a place where you would like to come back to.” If Penney’s can attract more families to its kids’ floor, the company expects a spillover effect to the adult areas.

Schumacher said the Carter’s shop will be about 1,500 square feet with a “very clean, easy-to-shop feeling, with photography, and an enhanced gifting experience.” Michael D. Casey, chairman and chief executive officer of Carter’s, said, “We’ve been given a preview of Penney’s new store experience and are excited about the path we are on together.” Two weeks ago, Penney’s ceo Ron Johnson led 35 of its top vendors on a tour of a 16,000-square-foot mock-up inside a Penney’s store in Dallas, revealing how the 1,100-unit, $16.5 billion chain will remodel and remerchandise all of its stores in the next four years to modernize the shopping experience and inject new brands.

Giggle Baby will have 750-square-foot shops selling gear such as strollers, diaper bags and car seats from different suppliers, as well as Giggle layette and gifts. Penney’s will be manufacturing Giggle Baby apparel for the shops.

The Tori Spelling Little Maven collection will appear in Penney’s starting in September and will offer knits, wovens, denim, outerwear, sweaters and outfits for newborns through 24 months. Both DreamPop and Little Maven will be merchandised to stand out but not with shops.

In its children’s departments, Penney’s sells sizes 0 to 16 in girls’ and 0 to 20 in boys’. Children’s wear is considered a low margin, low productivity category, but Schumacher said at Penney’s, “Children’s wear doesn’t have a lower productivity than the total store, which is probably unusual.” Penney’s is also distinctive because it covers all ages in children’s, she added. Children’s is roughly 12 percent of Penney’s business overall.

In intimate apparel, Penney’s wants to up its fashion appeal and be less weighted with basics. “We are going to be completely remerchandising lingerie,” said Lorraine Hitch, senior vice president and general merchandise manager of women’s accessories and intimate apparel. In addition to adding Cosabella Amore, the Vanity Fair assortment of bras, panties, daywear and sleepwear will be supplemented with updated sleepwear and European-influenced styles. The Maidenform selection of bras, panties and shapewear will be beefed up with activewear and lightweight bodywear.

Maidenform and Vanity Fair shops, around 500 square feet each, will start opening spring 2013, “not just to show key items but also to have all the coordinating pieces and expand into new categories. They will represent the full expressions of the brands, which in some cases means new categories that Penney’s hasn’t carried or categories being developed for the shops.”

Cosmopolitan shops, at 300 to 500 square feet, selling bras, panties, sleepwear and loungewear, will launch Sept. 1. “We are executing all the current runway trends for intimate apparel,” said Hitch. “It will be very fashionable but very accessible and extremely affordable,” with the majority of the line priced under $30, including bodysuits in solid and animal prints for $15. “Cosmopolitan is going to be merchandised in all stores in a number-one location in intimate apparel — as a boutique with all new visual elements.”

Cosabella Amore will be introduced in spring 2013, in 300-square-foot formats. The merchandise will have the “sophisticated style” of the regular line sold at Neiman Marcus, Saks Fifth Avenue and Barneys, but will be “well within a price point for J.C. Penney customers.” She described Cosabella Amore as “very feminine, with a tremendous amount of color and lots of lace.”

A Cosabella Amore thong at Penney’s will cost $10 to $12, whereas at Neiman’s they could be up to $35. Baby dolls at Neiman’s would be $90 to $200 whereas at Penney’s they will be sold for at about a third as much. Thong three-packs, available starting around Thanksgiving, will be a teaser to the shops opening next year. A bridal collection will retail from $12 to $45.

“It’s been quite difficult to find the right partner for Cosabella Amore,” which was launched in 2008, said Guido Campello, vice president of sales, branding and innovation at Cosabella. “It’s very trend forward, and maintains the color and aesthetic philosophy of Cosabella. When we were approached by J.C. Penney with this new world they are creating, it seemed like the perfect solution. We are not giving up anything. We will still offer the same leading trends, the same innovation. We are paring it down to fit into any price point. We are challenging the current stigma of what a Penney’s customer can buy.”