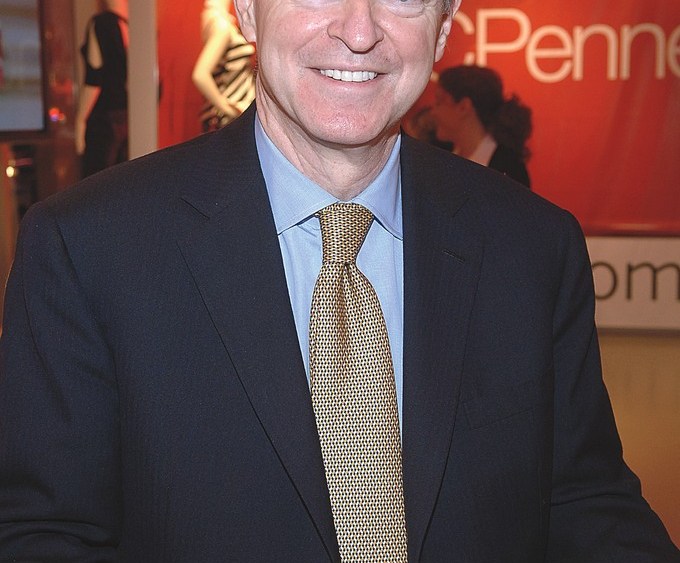 J.C. Penney, already in a battle for survival, now has internecine warfare on its hands.

Chairman Thomas Engibous has taken odds with William Ackman, the activist shareholder and vociferous member of Penney’s board, who on Thursday morning issued a letter to the media complaining that Penney’s hasn’t acted fast enough to replace interim chief executive officer Myron “Mike” Ullman. Ackman claimed that former Penney’s chairman and ceo Allen Questrom is ready to return as chairman provided he approves of the ceo.

Later that afternoon, Engibous fired back at Ackman, stating that Penney’s search process for a new ceo “began in earnest three weeks ago” and that the company has made much progress since Ullman returned as ceo four months ago, “under unusually difficult circumstances.” Since then, Engibous wrote, “Mike has led significant actions to correct the errors of previous management and to return the company to sustainable, profitable growth.”

Engibous credited Ullman with helping to improve the company’s financial position, bringing inventory back to appropriate levels across all businesses, restoring successful private brands in time for back-to-school, addressing issues in the home business, making the stores easier to shop and reintegrating the online business with stores.

“The board of directors strongly disagrees with Mr. Ackman and is extremely disappointed that his letter was released to the media at the same time that it was sent to the board,” the chairman wrote.

Engibous said Ackman, who owns 17.4 percent of Penney’s and is its largest single shareholder, has been integrally involved in the board’s activities since he joined two years ago, including leading a campaign to appoint the company’s previous ceo, Ron Johnson, under whose leadership “performance deteriorated precipitously.”

“Ackman’s latest actions are disruptive and counterproductive at an important stage in the company’s recovery,” said Engibous.

“Mike is the right person to rebuild J.C. Penney by stabilizing its operations, restoring confidence among our vendors and getting customers back in our stores. He has the overwhelming support of the board of directors, and we are confident the company is in good hands.”

Despite the chairman’s positive report card on Ullman, Penney’s continues to bleed cash, its stock price has fallen sharply and the retailer could be headed for either a takeover or a restructuring, according to retail and financial sources. J.C. Penney shares initially soared in early trading after Ackman released his letter, then slid throughout the day before closing up 6.7 percent to $13.66. They continued to fall in after-hours trading, declining 3.5 percent, or 48 cents, to $13.18.

The question now also is how long the boardroom bickering over Ullman will go on. Ackman’s letter, first posted on CNBC, said, “While I supported the decision to bring back Mike as an interim ceo, it was based on Tom’s statement that we would immediately launch a search process for a long-term ceo.”

He noted that it wasn’t until the July 22 board meeting, four months after Ullman returned to the fold, that the directors agreed to make succession a part of its agenda. His letter also disclosed that Penney’s board “just hired a search firm.”

“Considering the scale of J.C. Penney, the seriousness of the issues it faces and the complexity of its business, there are only a handful of executives with sufficient talent and experience to take on the ceo role. We need a ceo with extensive, ideally department-store retail experience, strong operational skills and a strong public company track record. When non-competes, geographical considerations and other personal and timing issues are considered, the number of potential ceo candidates is quite limited.

“Allen Questrom, who saved the company once before — the stock rose from $13.94 to $39.10 during his four-year tenure —has agreed to return as chairman of the board and assist in the turnaround as long as we hire a ceo that he supports. Allen believes that a thorough vetting of the limited potential available candidates can be accomplished in 30 to 45 days,” Ackman wrote.

The activist investor wrote that as the retailer’s largest shareholder, “I strongly urge that we immediately put together a short list of candidates, determine their interest level and schedule a fast-track interview process with the board.”

Ackman ended the letter stating, “We can’t afford to wait.”

Ackman declined a request for an interview and representatives at Penney’s declined comment.

Penney’s board totals 11. In addition to Ullman, Ackman and Engibous, other directors include Geraldine Laybourne, founder and former chairman and ceo of Oxygen Media and Steven Roth, chairman of Vornado Realty Trust.

Should Ackman prevail and Questrom become chairman, it would mark a return since he served as Penney’s chairman and ceo from January 2000 to December 2004 and is quite familiar with retail rescue operations. In the late Eighties and Nineties, he brought Federated Department Stores back from Chapter 11, and years later stabilized Penney’s when it was on the brink of bankruptcy. Ullman succeeded Questrom as ceo.

On Thursday, Questrom told CNBC he would consider returning as Penney’s chairman to try to salvage the chain, provided his conditions are met. He said he’s got to be comfortable with Penney’s next ceo, and that there are only three to five qualified candidates to succeed Ullman.

Among those Questrom and Penney’s would reach out to is Ken Hicks, currently chairman, president and ceo of Footlocker, who was president and chief merchandising officer of Penney’s reporting to Questrom and later Ullman. He’s a highly respected retailer, a West Point graduate and is said to have a good relationship with Questrom.

Long shots would be Stephen I. Sadove, chairman and ceo of Saks Inc., provided he decides to vacate the luxury chain, which is likely considering Saks has agreed to be sold to Hudson’s Bay Co. Vanessa Castagna, a former Penney’s president, could also be considered for a top job at Penney’s, though she was already passed over for ceo by Questrom and has been out of retailing for awhile.

“If Allen became chairman, there’s little doubt that he would be the true ceo,” remarked Isaac Lagnado, president of Tactical Retail Solutions. “You have to wonder how many people would be eager to be ceo at Penney’s if you had someone as powerful as Allen Questrom serving as chairman.”

Others noted that Questrom worked extremely hard to stabilize Penney’s and most likely would not want to deal with all the heavy lifting once again required, preferring to leave that to the ceo. They were surprised that Penney’s appears ready to replace Ullman since he’s been only on the job for four months and was dealt a poor hand by Johnson. Penney’s has been considering closing many stores and owns a good deal of its locations. “Bankruptcy would be the best solution,” said one retail source, noting that a bankruptcy enables a retailer to readily break commitments to malls and landlords. “The sales drop Penney’s has suffered has turned marginal stores into money-losers,” said the retail source. “Penney’s owns a lot of real estate. A lot of it is crap and they leveraged it all.”

In May, the troubled retailer finalized a five-year $2.25 billion term loan, which was arranged by Goldman Sachs and is secured by its real estate. The company’s real estate portfolio consists of 306 owned stores, 123 ground-leased stores and 675 leased stores, for a total of 1,104 units, plus 15 distribution centers and its headquarters.

With Penney’s stock low, private equity firms such as TPG Capital and KKR & Co. are believed to have been eyeing Penney’s because they could buy a big chain cheap and attempt a turnaround. Though Penney’s weak performance and cash situation have sparked bankruptcy rumors, vendors said Thursday that Penney’s has been paying its bills. However, “Penney’s is not getting enough sales and stocking up on receipts,” said one supplier. “Penney’s has been so battered in the public market, why not take it private? The price is so low. If there’s someone who thinks they can turn around the company, they can get it really cheap.”

According to financial sources, private equity firms have about $150 billion of capital that have to be put to use this year, or those funds will have to be returned to investors. Some private equity firms, such as TPG, have asked investors to extend the lives of the investment funds to allow them more time to find suitable investments. In the case of TPG, sources said the majority of investors of its TPG Partners VI fund have approved the extension of the fund through February 2015. That fund reportedly still has about $3 billion of capital that needs to find an investment home.

Several of the larger private equity firms, including Leonard Green & Partners, KKR and TPG, are said to be looking at the retail sector for investment opportunities.

Deborah Weinswig, broadlines analyst at Citigroup, rated the stock a “sell” on Thursday, following the speculation last week about the retailer’s cash burn rate. She noted: “If ceo Mike Ullman and JCP board were able to convince Hicks to rejoin JCP in an executive role, we believe that our ‘sell’ call is at risk. Ken joined Footlocker from JCP, which he left in June 2009.”

Sterne Agee analyst Charles Grom said if Questrom were to return to Penney’s, “We believe it could lead to the return of many former J.C. Penney executives across the c-suite, which, for the most part, has yet to be filled by current ceo Mike Ullman. In our view, a return of the ‘old-school JCP team,’ under Questrom, would be a very powerful combination and materially improve its turnaround situation.”

Grom said the potential return of Questrom is a positive for the company. Walter Loeb of Loeb Associates and a former retail consultant, said, “Ackman is hurting the company. He should give Ullman a chance, at least six to nine months, to get things together. What they need is a new president. Ullman is trying to put things together to make this work.”

One retail source said salvaging Penney’s is still possible because while retail competitors have taken some market share, no one has pounced. “If Kohl’s or Target were really flying, it would be tough, but they’re not.”

During his CNBC interview, Questrom said it was hard to say whether Penney’s can be saved. “It’s such a great history, you wouldn’t want to give up until it was dead.”